In the end, a company does the right thing 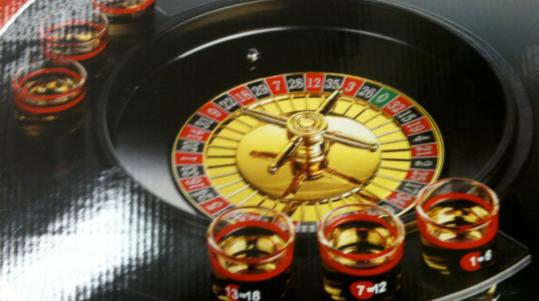 A product at T.J. Maxx stores made a drinking game out of roulette.
By Beverly Beckham May 30, 2010

I was in the T.J. Maxx store in Concord, N.H., with a friend last Monday, when we both noticed a rack filled with drinking games.

They were called Bingo and Checkers and Tic-Tac-Toe, and were on display next to graduation and Father’s Day gifts.

They looked like children’s games. But they were not. You win at the drinking game Bingo, the instructions say, and you drink a shot.

You jump someone in Checkers, and that person has to drink. You lose Tic-Tac-Toe and you have to drink everything on the board.

I stopped at my local T.J. Maxx in Norwood on my way home. There were games there, too, Drink Like a Fish. Gargle (a tune). Drink Til You Drop. Roulette and Ship Wrecked and Battle Drinks and Good Luck Chuck.

I called Framingham-based the next day. I told them I was writing for the Globe and said the words “prom season’’ and “graduations’’ and “underage drinking’’ and kids “getting drunk and driving’’ and “kids dying’’ and “corporate responsibility.’’ And the company heard.

So this is a story of a big corporation doing the right thing. Not after thousands of angry letters of protest. Not after being featured on the evening news. But immediately.

Some of the drinking games that were being sold had warnings: “Alcohol consumption is extremely dangerous and can lead to sickness and even death. The publishers of this game do not advocate or endorse the consumption of alcohol, and accept no liability for the consequences of your behavior if you consume alcohol while playing this game. This game may be played with non-alcoholic beverages.’’

TJX could have taken this “we accept no liability and we’re not responsible,’’ irresponsible stand, too, and kept right on selling these games.

The company certainly could have delayed pulling them off the shelves, hemming and hawing for a month or two until most were sold and the company had made a nice profit.

But this corporation, which also owns Marshalls, Home Goods, and A.J. Wright, and operates 2,600 stores worldwide, immediately took the high road, and within 24 hours pledged to remove these products from its stores.

“We believe our decision reflects our values of integrity and respect for our customers,’’ wrote Sherry Lang, senior vice president of global communications for TJX Companies Inc.

In January 2007, Kohl’s and Target stopped selling drinking games, too, but only after a letter campaign and protests by The Community Anti-Drug Coalitions of America and Join Together, a public health project at Boston University.

Only after some 2,000 people made phone calls, sent e-mails, and complained in person to store managers.

“All drinking games do is encourage underage drinking. There is no reason for them. Responsible companies shouldn’t have them on their shelves,’’ David Rosenbloom, founder and director of Join Together, who fought this earlier fight, said Tuesday.

T.J. Maxx has proved itself a responsible company. If we want to keep our kids safe, it takes this kind of reaction — businesses and communities and people all working together to protect our kids.

No underage drinking parties. No parents collecting keys and looking the other way. No older kids buying for younger kids. And no drinking games.

A youth making it home at night, not drinking and driving, not passing out from alcohol poisoning, not blacking out, not falling down steps or off a balcony, or going off with the wrong person. Living, breathing, sober kids are not news.

But the action of a company to protect them is. “Thank you for bringing this matter to our attention,’’ wrote the TJX Companies Inc.

Thanks to the TJX Companies for listening.