Embracing track late in the game, she heads off to an unlimited future 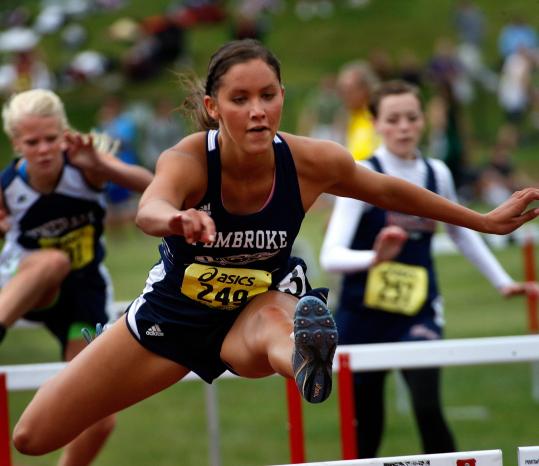 Her ability to compete in multiple sports is not unique. But Berkeley Hall has the rare athleticism, and determination, to excel in three different disciplines.

A senior at Pembroke High, Hall is a two-time state champion in club gymnastics who has performed with, and against, the nation’s best. On the volleyball court, she’s a force at the net as an outside hitter. She has also developed into a stellar all-around athlete in track and field.

The only question: Where did her future lie? Track, certainly, was not her favorite.

“Actually, I really did not like track and field at all until the end of last year,’’ Hall said with a laugh.

As a junior, she chose to return to gymnastics, where she was an MIAA state qualifier in the all-around as a freshman, rather than try indoor track.

“I really did not like track, so I did not want to do a whole season of it,’’ added Hall, who had a forgettable season on the basketball court as a sophomore.

Greg Zopatti, who coaches the indoor and outdoor track teams at Pembroke, was worried that Hall would not realize her potential. “That was a tough winter for me,’’ he said. “But it’s really up to the kid. She wasn’t ready yet.’’

The turning point came last May, at the Hartford Public Invitational. Hall won the triple jump with a mark of 37 feet, 4 inches and ran a personal-best 15.23 seconds in the 100-meter hurdles.

Then the letters from college coaches “started coming in,’’ according to Zopatti. “That was a big confidence boost. Everything came together, and that’s when she really became a worker.’’

And a legitimate Division 1 track and field recruit, since she had only scratched the surface of her ability. Despite her volleyball prowess for Pembroke and her Junior Olympic team, she was too short at 5-foot-7 to be a D1 outside hitter.

So she will head to Dartmouth this fall, and run track for the Big Green.

“With her background in javelin and hurdles and knowing she’s a great horizontal jumper, I’m thinking multi-events with her,’’ said Dartmouth assistant coach Will Thomas, adding that Hall can compete in the pentathlon indoors and heptathlon outdoors.

“The fact that Berkeley is a phenomenal volleyball player and a phenomenal gymnast . . . being an all-around athlete is almost a prerequisite to being recruited as a serious heptathlete.’’

Gymnastics was her first competitive sport. The USGA Level 8 state champion in 2006, Hall trained alongside Ivana Hong, an alternate on the 2008 US Olympic team, and competed against Alicia Sacramone, the Winchester native who won a silver medal at the 2008 Beijing Olympics in the all-around.

However, her gymnastics and athletic career nearly ended before it really began when she landed awkwardly in February 2006 practicing a triple front flip. She fractured two vertebrae, and a disc rested precariously on her spinal cord.

Despite being put in traction and a halo brace for nine weeks, Hall never saw the bad landing as an end to her competitive career. “I never thought ‘I’m done.’ I was thinking, ‘Once I get this thing off . . .’ ’’ said Hall, who went on to win the USGA Level 9 state title a year later and competed at Level 9 nationals.

Hall turned next to volleyball, her mother’s love. “I loved volleyball and I want everybody else to love it, but I had to twist her arm to play,’’ said Jen Hall, who, like her husband, Chris, grew up in volleyball-mad California. Berkeley was born in Newport Beach. “Now she loves it and volleyball became her sport.’’

Dartmouth does have a varsity women’s volleyball program, but it’s unlikely Hall will have the time to play. For now, her goal is helping Pembroke win a third consecutive state outdoor title on Saturday at Oliver Ames. The Titans, two-time champion in Division 4, are moving up to Division 3 this year.

Hall will bypass the hurdles and focus on the triple jump and the long jump, which she only began doing indoors. She is less than 2 inches away from reaching the 39- and 19-foot marks, respectively, and has already qualified for the New Balance Nationals.

“I like it [jumping] because I feel you can always get better at it,’’ Hall said. “I’ve never had that moment where I’ve felt that’s all I could have done. . . . I’m going further the next meets to come.’’

Rick Seto may be reached at rick.seto@gmail.com.