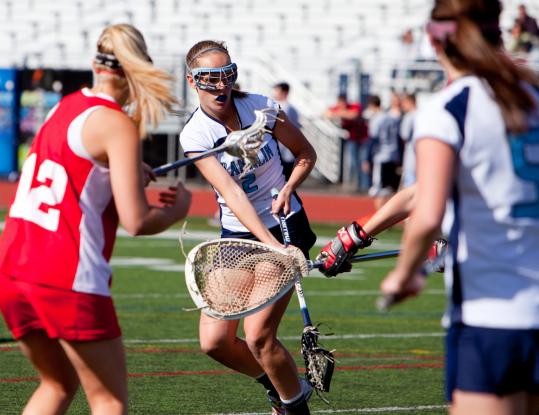 Franklin High’s Heather Grove, shooting and scoring against North Attleborough, is among the players helping the team to its best start, even giving coach Chris Schmidt (below) his first wins over perennial Hockomock League power King Philip Regional. (Rose Lincoln for The Boston Globe)
By Adam Kurkjian Globe Correspondent / May 13, 2010

Chris Schmidt took a moment before a recent practice to deliver a message to his Franklin High girls’ squad, illustrating just how far the lacrosse program has come since his first season, in 2001.

The Panthers are underdogs no more; they are now the team to beat.

And this spring, with Franklin off to an 11-1 start, and unbeaten in the Hockomock League at 10-0, may be just the beginning. The town’s youth program, started in 2004, is still in its infancy, but is stocking both the girls’ and boys’ rosters at the high school. This season, the Franklin girls moved up to Division 1 from Division 2.

“I was in seventh grade when the youth program started,’’ said Franklin senior captain Gina Velluti, a defender. “Now they’re out there and they’re 8 years old. And it just is changing the game so much, it’s making us so much better. The incoming freshmen, they don’t even know how good they’re going to be.’’

Did the Panthers know how good they were going to be this season? An early indicator was the second game of the season, when Franklin upended perennial Hockomock power King Philip Regional, 10-6. The Panthers also won the rematch, 8-6.

“Up until this year my record against King Philip was 0-17-1,’’ said Schmidt. “They were just outstanding. It became a mental thing. This season has been a huge confidence builder for our girls. To win a game like that was huge for us this year.’’

“We wanted it so bad, especially being a senior,’’ Velluti said of the second win over King Philip. “It was the perfect way to finish off playing them this year.’’

“Right when we beat KP, it was all over Facebook. Everyone was so happy,’’ said junior midfielder Heather Grove, who leads the team with 36 goals and 16 assists after a seven-point afternoon in an 18-5 win over North Attleborough on Monday. Citing her youth lacrosse experience, she said, “It was like the whole program brought us all together.’’

The Panthers qualified for the Division 2 tourney for the first time in 2003, fell short in 2004, but have earned a postseason berth every year since. Franklin registered its first postseason win in 2007, against Cape Cod Academy, and last spring, when the team finished 11-7-2, defeated Cohasset in the preliminary round before bowing out against Duxbury.

The team’s fast start this season has put the spotlight on the youth program as it continues to flourish and develop young players. Ryan Jette, the town’s recreation director, credits, among others, Lindsey Kirshe, Katie Berthiaume, Barry Magerman, and Hank Verspirille with helping teach skills to the town’s youth. The first year, according to Jette, there were 28 players. Now there are more than 200 participants.

“I knew nothing of the game of lacrosse’’ when the youth program started, said Jette, a Franklin native who played college baseball at University of Massachusetts Amherst. “It was not already being offered and there was an interest to get it going. And if there are kids that want to play, then that’s my job.’’

Franklin High’s starting goalie, Anne Verspirille (4.2 goals-against average), said that “this is the first senior class to have multiple years of youth and you can really tell. Mr. Jette runs the rec department and has done a really good job of getting really good coaches, and really getting a lot of the girls into it and having fun.’’

The Panthers are on track for the Hockomock League title. They are having fun. But Verspirille said the team has bigger goals in mind.

“We’ve had an excellent season but we’re not done yet,’’ she said. “Hopefully we will finish out the way we started.’’

Lincoln-Sudbury senior attack Devin Acton, however, led both teams in scoring, with four goals and three assists, despite the marking effort by Billerica defenseman Jimmy Holland, a player Vona called “the best player in the state.’’

“He’s a great player. He’s a great guy. I talked to him a little,’’ Acton said of Holland. “I like competition, so I know it made me better and made me realize new goals I have to set for myself.’’

Midfielder Trevor Shorb dominated the face-offs, according to Vona, helping his team win 20 of the 25 in the game. Vona also lauded the play of defenseman Rob Karn, who guarded Billerica sniper Grant Whiteway and limited him to three goals and two assists.

Acton (53 goals, 77 points this season) said the Warriors gained valuable experience in the close loss. Lincoln-Sudbury held a one-goal lead in the fourth quarter, only to see Billerica take over in the final minutes.

“I’d say we learned that no matter how many games we are going to win, we know that there are better players out there and there’s always room for improvement,’’ said Acton. “We knew we were a good team going into the game. I just don’t think we realized we had to capitalize on all the other team’s mistakes. I think we learned that and it will help us down the road.’’

Adam Kurkjian can be reached at adamkurkjian@yahoo.com.