At the Burnt Food Museum, serving up life’s little defeats 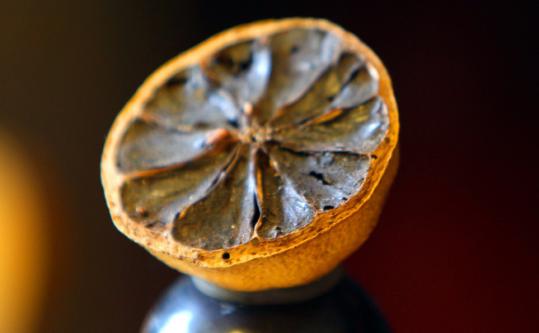 Set up by harpist Deborah Henson-Conant in her Arlington home, the Burnt Food Museum features culinary achievements such as this lemon crisp. (John Tlumacki/Globe Staff)
By Taryn Plumb Globe Correspondent / May 13, 2010

Even if you’re no Julia Child, you’re probably at least endowed with this home-economics class essential: Try to keep from burning the food.

In its gallery, singed, scalded and seared food is an art of accident; a curious memento to look at and tell stories about; a whimsical treatise on the inevitable imperfections of humanity.

“People think burnt food is a negative thing. But it’s really important, before you claim failure, to stop and take a look at what you’ve done and find the beauty in it,’’ said the museum’s “curator,’’ Deborah Henson-Conant, a professional harpist when she isn’t appraising burned relics.

Her well-tuned skills of impatience and distraction have made her a prolific contributor, too. Once she left sweet potatoes in the oven when she headed off to Mexico, and returned five weeks later to a fossilized mess that had been slow cooked by the pilot light.

“This is about seeing what you accidentally did that’s wonderful; it glorifies something people are ashamed of,’’ she said of her museum.

The museum’s exhibits are largely kept in storage at Henson-Conant’s house. The blazed and calcified equivalents of Rembrandts and Picassos are rarely shown in full-scale exhibitions, but are viewable on its official website (www.burntfoodmuseum.com) or by appointment — “private salons, ’’ said Henson-Conant.

“It’s an unexpected way to create a testament to human fallibility — which is such a huge part of who we are,’’ said one of the museum’s contributors, Arlington resident Chris Fitch.

Typically, when an acrid aroma singes the air and debris cover the cooktop, the impulse is to chuck or bury the shameful result in the compost — if the inedible item hasn’t been conflagrated beyond biodegradable recognition, that is.

But for a private showing in Henson-Conant’s Arlington kitchen, the scorched remnants of food are arranged artfully on plates or encased under glass, and bear witty distinctions such as “Thrice-baked potato,’’ “Don’t try this if you’re not from California,’’ or “It might have been lasagna.’’

Within the esteemed museum’s gallery, there’s a torched muffin looking like a sunburned mushroom; a pair of “hash blacks’’ resembling steel wool pads; a petrified, skewered soy pup; a litter of calcified green beans, akin to discarded cigarette butts; a mass of dusky macaroni encrusted in a warped microwave container; and a black form, like hardened lava flow, cratered and pored, with rising hillocks and dipping valleys, fused forever with an old pot.

“It’s a way to take accidents and make something precious out of them,’’ said Stoneham sculptor Arthur Ganson, whose anticulinary skills are also on display here. But he quickly corrected himself. “I supposed ‘unexpected result’ is a better phrase than ‘accident.’ ’’

His unexpected result? A quadrangle of torched waffles, looking like Lego blocks shriveling into themselves. He also plans to submit two pieces of “totally exquisitely burnt corn’’ that he neglected in a steamer basket — without sufficient water — for about an hour.

“It’s just totally perfect and beautiful,’’ he said of the collection. “Doesn’t the world need things like this?’’

Ultimately, the museum reflects the Grammy-nominated composer/musician’s existential philosophy — with her Xena-like outfits, ribbon-streaked hair and excitable on-stage personality, she presents the oft-considered prim and demure harp as a wailing, electric animal.

With her music — and with burned food — her intent is to present the other side of things, to flip-flop long-held perceptions.

“What else can it show me about the world? That’s a really important question I like to ask myself,’’ she said as she stood behind a counter in her kitchen — which lingered not with the harsh scent of smoke, but with the sweet aroma of bakery-bought blueberry muffins.

Behind the energetic, rainbow-haired musician, various artifacts stood out in ashen agreement. Nearby, there was also a sign with a timely reminder: “The front two burners on the stove don’t work, so please don’t use them. Thanks.’’ A fire extinguisher also stood poised at the ready.

“If any of this had been a successful meal,’’ she said, motioning around, “it would have been eaten and forgotten.’’

And with the word “museum’’ attached to them, these pieces that previously would have been considered trash take on a sort of priceless quality. Henson-Conant described moments of panic and paralysis when exhibits were accidentally dropped — akin to the response you might get, say, if the “Mona Lisa’’ fell out of her frame. She recalled the parched nacho opus, hardened to the texture of drywall, that was lost when her dieting cat Cosita — obviously desperate — gobbled it up.

Still, whimsical and playful as this collection of incinerated inedibles might be, there are standards: Art must be accidental. No intentional burnings.

Because that’s how it all started: A chilly night in 1989, cider brewing on the stove, a two-hour phone conversation. Suddenly, alerted by an acrid smell, Henson-Conant dashed to the kitchen. There, she discovered a stiff, blackened column of cider foam, resembling something like a meteorite or a chunk of concrete.

So she did what anyone would do. “It was impressive-looking,’’ she shrugged, “so I put it on a shelf.’’

Soon there was another addition; then others; and even more as she mastered the rather difficult skill of burning food in microwaves and rice cookers. Suddenly she had a collection.

And when she started telling people about it, she found they were eager to contribute, or to confess their own kitchen foibles and full-on disasters. Now, she encourages anti-Betty Crockers to display their over-roasted objets d’art in their own kitchens, and she’ll honor them with an official certificate. (The progenitor, meanwhile, has since gotten into raw food — which she says has nothing to do with her cooking skills.)

Overall, she said, “It’s not just the exhibits, but the story behind them.’’

As she’s discovered, burned food is often the vestige of the absent-minded, the easily-distracted, the impatient, or the over-scheduled — and sometimes just bad, but well-meaning, cooks.

She recalled one shared story of a pregnant woman who basted a turkey, loaded it into the oven — and then promptly went into premature labor. Six days later, she came back to what was essentially a philo-dough shell of a turkey.

A masterpiece didn’t take quite so long for Fitch.

Twelve years ago, he forgot a shrimp shish kebab on the grill; overnight, it slowly mineralized with the expiring coals.

“Just enough to make it perfect,’’ he said, “accidentally perfect.’’

Too bad, he said, there isn’t a “burnt tea kettle’’ museum — because he used to be pretty good at that, too.