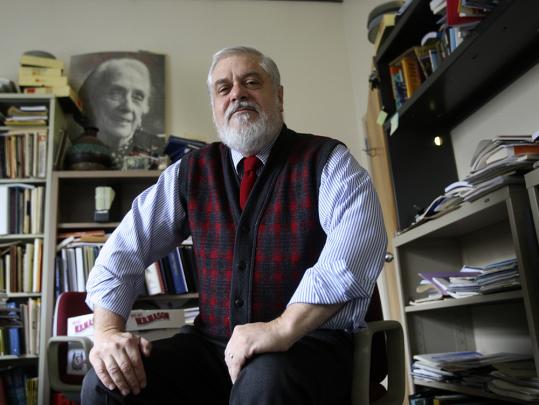 Rafael Moure-Eraso has been with UMass Lowell for more than 20 years. (Suzanne Kreiter/Globe Staff)
By Karen Sackowitz Globe Correspondent / April 15, 2010

Rafael Moure-Eraso came to the University of Massachusetts Lowell in 1988 as an associate professor in the newly created Work Environment Department. In the 22 years since, he has helped expand the department he now chairs, which is considered to be the nation’s leading graduate program in designing safe and healthy work standards.

The professor’s work was recognized when he was nominated by President Obama to chair the US Chemical Safety and Hazard Investigation Board. News of his nomination left him speechless.

“I remember feeling like if I were to die today, I would be satisfied,’’ he said.

Moure-Eraso, 64, is halfway through the nomination process; next come the Senate confirmation hearings, which could take up to two months.

Although he hopes to be confirmed, he said whether or not he is ultimately chosen, he is already proud.

“To be nominated by the president of the United States for a job — just to be nominated is an honor,’’ he said. “This is recognition of us as the first program in the nation to focus on this area. It’s about where we’ve come from and the work we’ve been doing all these years to bring the issue to the American people.’’

Kenneth Geiser, Moure-Eraso’s colleague in the Work Environment Department, shares his pride in the achievements of their team.

“The department we’ve built here is one with broad, holistic views of the hazards of work,’’ said Geiser. “We encompass elements beyond the hazard, such as the technology, the rights of the workers, the rights of neighborhoods, and so on.’’

Geiser added that Moure-Eraso stands out within the team for his dedication to field-based activism.

“Rafael knows this is not just an academic exercise,’’ he said. “He gets students into real places where they can see the hazards that are out there firsthand.’’

The US Chemical Safety and Hazard Investigation Board, also known as the Chemical Safety Board, is made up of five members, each nominated by the president, confirmed by the Senate, and serving five-year terms. The board is charged with investigating industrial chemical accidents to determine root causes and making subsequent recommendations to plants, regulatory agencies, industry organizations, and labor groups. In Massachusetts, it was this board that investigated the 2006 factory explosion in Danvers that damaged a neighborhood of homes and businesses.

Board members oversee investigations and serve as principal spokespeople at accident sites, community meetings, hearings, and boards of inquiry. Following their approval of final reports, board members advocate recommendations designed to show others in industry and government safety approaches.

Members are appointed on the basis of technical qualifications, professional standing, and demonstrated knowledge in fields relating to chemical accident reconstruction and safety engineering.

The chairman serves as the chief executive officer, overseeing agency administration. The full board is responsible for strategic planning and direction, and approval of investigation reports and studies.

Moure-Eraso’s experience in occupational health and safety spans three decades. Before joining UMass Lowell, he was a visiting lecturer in occupational health at the Harvard School of Public Health, and worked at the US Department of Labor as a special senior adviser on prevention of chemical exposures to the assistant secretary for Occupational Safety and Health. He also served 15 years as an industrial hygienist engineer with the national offices of two international unions: United Automobile Workers and Oil Chemical and Atomic Workers.