Plates may have rich history, but it’s tough to trace 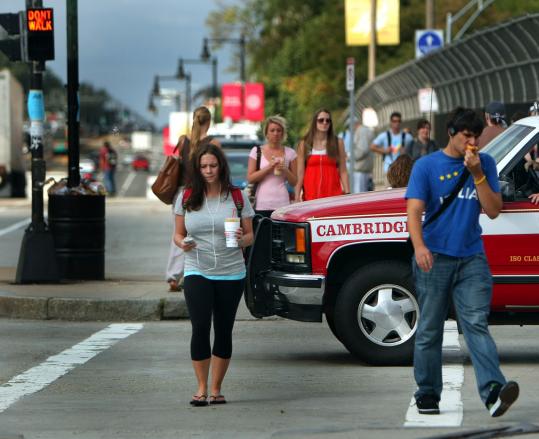 In response to a reader’s question, columnist Peter DeMarco discovered that state law gives pedestrians the right of way even at an intersection controlled by a traffic signal. (John Tlumacki/Globe Staff/File 2009)
By Peter DeMarco Globe Correspondent / April 1, 2010

One of the neatest stories I’ve ever written was about a derelict property in the South Bronx. Go as far back as possible, my journalism professor said, and see if anything interesting turned up.

But in the 1920s, a giant Jewish community center was built, with a ballroom, swimming pool, and synagogue. It was the lifeblood of the community, and on holy days, thousands filled its halls to hear Rabbi Jechiel Charlop’s booming voice.

Reader Pat Lockhart of Dover had a question that reminded me of that story. Is it possible, she asked, to learn the names of all the people who have ever had your car registration plate number? Even someone a century ago?

“I took over my dad’s plate when he died. It was told to me that it belonged to my grandfather,’’ she wrote.

“A friend who works for a police department checked for me to see if it has always been in my family, and was told they can only trace a plate back for two owners. How can one trace the origin of a license plate?’’

Plate origins
I wish I had better news. Fact is, it’s next to impossible to find out the previous owners of anyone’s license plate.

Once upon a time, you might have been able to persuade a Registry of Motor Vehicles clerk to pull up a list of previous owners. But that door closed in 1997, when Congress passed the Driver Privacy Protection Act, which restricts “the disclosure of personal information from RMV records,’’ including the names of previous plate owners.

I asked Stewart Berg, who is probably the state’s preeminent license-plate collector, whether he had any suggestions. “Good luck,’’ he said. “The only way to really do it now is if you have a friend who’s a police officer.’’ But that route, as Lockhart says, gets you only so far.

With significant digging, you might be able to find license plate owners from 1903, the first year Massachusetts issued plates, through 1930, Berg said.

During those years, a book called the Massachusetts Automobile Register provided annual lists of just about every license-plate holder in the state, he said. (Back then, owning a car was still a sign of prestige, and owners liked to see their names in print.)

But the books are extremely rare, absent from the national book database used by the Boston Public Library.

Harvard University has copies of a similar publication, the Numerical List of Automobiles Registered in Massachusetts, which ends in 1911. The Boston library also has The New England Auto List on microfilm from 1912 to 1914.

Even if the Registry could release names, it’s unclear how far back its records go. Boston librarian John Hooper, who helped with my research, found a state law from 1911, and still in effect, that allows the Registry to throw away “obsolete’’ registration records after just three years.

Unrestful stops
Sitting in bumper-to-bumper traffic on Route 128 was bad enough. Then Gail Daly looked out her window and saw a man who had pulled over and was relieving himself in plain sight.

“Everyone could see him and most people were as shocked as I was,’’ wrote Daly, who added that passengers in the man’s vehicle were cheering him on. “Without even a ho-hum he gets back in his car and starts to drive off.’’

Daly called the State Police, who patched her through to local police. About 10 minutes later she watched the man drive past a police cruiser, but to Daly’s amazement the police never stopped him.

“What more should I have done?’’ she wrote.

I posed the question to David Procopio, spokesman for the State Police.

“The crime described by the reader, indecent exposure [aka public urination], is a misdemeanor without past right of arrest, which means that the person could not be arrested unless the act was actually witnessed by a police officer,’’ he wrote back. “It is possible that the local police sent someone by the area where the person had been seen urinating but he was gone by the time they got there.’’

If the man had done more than urinate — for example, if he’d made a sexual gesture while exposed — the violation would be open and gross lewdness. As a felony, the charge would have allowed police to arrest the man “based solely on the probable cause of witness statements,’’ Procopio said.

“If a person is standing at the curb on a crosswalk, do you have to stop for him if the crosswalk is at a traffic signal and the light is green for drivers to proceed?’’

I come across this situation all the time in Somerville, where there’s a crosswalk controlled by a push button just outside Davis Square. When I’m on foot, I push the button and wait. But others are brazen, traversing the crosswalk as if no signal existed.

Are those people jaywalking? Sure. Do they still have the right of way? Well, unfortunately, yes, said Ann Dufresne, Registry of Motor Vehicles spokeswoman. “You must yield to pedestrians entering or using a crosswalk in your travel path,’’ she e-mailed.

I’ve written similar things in the past. Police have told me that you simply can’t endanger pedestrians, even when they disobey the rules.

“Yeah, the pedestrian is at fault,’’ said retired sergeant Larry Fitzgerald, who worked in the Brookline Police Department’s traffic division. “ But if you run over the pedestrian, the judge is going to say shame on you. And that person’s family is going to be living in your house.’’

It’s a $200 fine for failing to stop for a pedestrian in a crosswalk, but there’s some leeway. According to Massachusetts General Laws Chapter 89, Section 11, if a pedestrian is on or “within 10 feet’’ of your side of the street, you’ve got to stop. However, if he’s farther away — or, to answer Girard’s specific question, on the curb — you can keep driving.

Somerville resident Peter DeMarco can be reached at demarco@globe.com. He also updates a Facebook page, “WhotaughtYOUtodrive?’’