A dream about to bear fruit 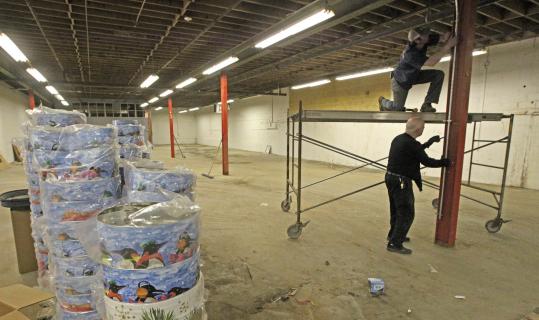 HANSON — For a decade now, Juvelyn Hartweg has dreamed about doing something special for Hanson’s children.

She started thinking about it when she was a part-time nanny while attending college. When she became a mother, it took on more urgency.

Now the dream is near reality: Hartweg is the executive director of the Hanson Children’s Museum, scheduled to open this fall in Cranberry Square, a 40,000-square-foot building at 1000 Main St. (Route 27) in South Hanson, adjacent to the town’s commuter rail station. Once a part of , founded in South Hanson in 1930 as a cooperative venture of the Ocean Spray Preserving Co. of South Hanson and two competitors, the building dates to 1850.

Hartweg, 32, and her husband, Eric Johnson, a Hanover firefighter, first viewed the building as a possible site four years ago and began serious discussions about 18 months ago with Hanson businessman Bob Walsh, who has owned the building since 1998. Walsh said he envisions the museum becoming part of an indoor country mall of small businesses and entrepreneurs.

“Ideally, the museum and the other businesses would feed off one another,’’ Walsh said.

Economic activity in South Hanson near Cranberry Square has been sporadic in the past few years, said Hanson town planner Noreen O’Toole, with a few businesses opening and closing and a major building in the area just changing hands.

The museum’s 9,600 square feet would be about the size of one floor of Boston’s famed Children’s Museum. There is no children’s museum in Plymouth County, and only one between Providence and Boston, housed in a former firehouse in Easton, which attracts about 50,000 visitors a year.

Hartweg and her husband said they hope to open their museum, at least in part, this fall. They need $150,000 to accomplish that, they said, and $250,000 would allow them to complete all 17 planned exhibits and pay for staff.

The museum received its IRS Chapter 501-c3 nonprofit designation in September 2009, allowing it to begin fund-raising. Hartweg said about 15 percent of the $150,000 needed to open has been raised and a major fund-raising drive has just begun, with several events planned. The museum’s board of directors is also targeting corporate foundations. Hartweg said the enthusiasm and energy of her crew of 30 volunteers will be enough to raise the money needed and overcome a bad economy.

“This is a labor of love for all of us,’’ said Hartweg, who believes the museum would eventually draw about 150 visitors a day. Admission charges would be $9 for children 10 and under and $5 for others, with discounts available. Hartweg said she is hoping to encourage families to buy memberships, at annual dues ranging from $99 to $199.

O’Toole said the town, which is facing an estimated $1 million budget deficit and at least a half-dozen layoffs, is in no position to help the project financially, but that doesn’t mean it does not support it. She said she has been combing through e-mails and grant lists while working with Hartweg to find some way to help.

Pasquale Ciaramella, executive director of the Old Colony Planning Council, a nonprofit regional economic development agency, said the council supports the project and has been working with Hartweg on possible funding, including bonds backed by federal stimulus funds or a federal Economic Development Assistance grant, although the criteria for such grants are very narrow.

“It would be a great opportunity for the town,’’ he said. “The Easton museum is doing well and brings in people. The Hanson site is away from the major highways, but if they market to the surrounding communities and take a regional approach, it will help.’’

Volunteers have been working on the museum site, where an open house was held on March 28. Hartweg said her group has also spent time at area malls to solicit donations and raise awareness, after she learned from other museums about the importance of getting the word out about the museum’s mission to inspire donors.

Fund-raisers, including a President’s Ball at Bernardo’s on Main Street in Hanson on April 17, will enable the group to start building the exhibits, which could be paired with corporate sponsors. The Fabulous Fifties Fantastic Rides exhibit, based on the history of Henry Ford’s car mass production, for example, would obviously seek an automotive tie-in.

Hartweg said she believes the project is far enough along in the process that “at this point, we’re not thinking about if, but when.’’

O’Toole said that after working with Hartweg, she, too, is optimistic the group will find a way to get it done.

“I just have the feeling she’ll be very successful.’’

A place for kids
The proposed Hanson Children’s Museum would:
{bull} Be the first children’s museum in Plymouth County and the second (after Easton’s) between Boston and Providence
{bull} Comprise almost 10,000 square feet
{bull} Feature 17 interactive exhibits based on American history
{bull} Draw about 150 visitors a day
SOURCE: Juvelyn Hartweg, Hanson Children’s Museum