For some, a time of prosperity 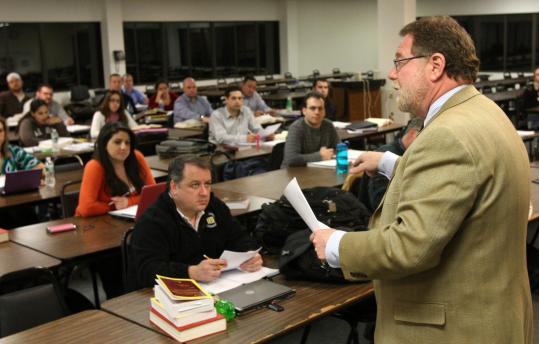 Jeffrey Kitaeff has seen enrollment triple within the past year for his bankruptcy law course at Massachusetts School of Law in Andover. (John Blanding/Globe Staff)
By Taryn Plumb Globe Correspondent / March 28, 2010

Bankruptcy: What does it bring to mind? Dejection? Failure? Broken dreams?

Third-year law student Joel Cranston sees something else: Job security, and a lucrative enterprise. Cranston, 29, has witnessed an “explosion’’ in bankruptcies — spurring him to explore a possible career in the field.

Still, he acknowledged, “I don’t know where the economy will be when I graduate. If no one’s filing bankruptcy, it may be just one area I take on.’’

The grim economy has created what seems like an infinite supply of somber situations: unemployment in the double digits; boarded-up homes; copious “going out of business’’ sales.

But dismal times like this also cultivate success stories. Not surprisingly, personal bankruptcy law is one of them.

“The volume over the last two years has increased dramatically,’’ said Mark Griffin, a lawyer and partner at Janos & Griffin, PC, who has worked in personal bankruptcy law for 14 years. He estimates that business has more than doubled at his Newburyport firm.

The growth has been just as dramatic for attorney Herbert Weinberg: Rosenberg & Weinberg, his North Andover firm, saw a 150 percent surge in business in 2007, and another 25 percent jump in 2008.

National numbers reflect the same expansion: Membership in the National Association of Consumer Bankruptcy Attorneys has ballooned from 2,486 in January 2007 to 4,588 as of early March.

“I think for the next year or two, there will continue to be a tremendous demand,’’ Weinberg projected.

Recognizing this, schools have also adapted. This fall, the Massachusetts School of Law at Andover, for instance, plans to add a new course on creditor’s rights.

“A law school, or any school, has to respond to the economic times it’s in,’’ noted associate dean Michael Coyne.

All told, the school has seen about a 20 percent increase in enrollment in its bankruptcy courses. “Students, like anyone else, want to know that they have good employment prospects,’’ Coyne explained. “The likelihood for the foreseeable future is that we will need more bankruptcy lawyers.’’

Chapter 7, which liquidates nonexempt assets to pay debt, is the more common form of bankruptcy for personal debtors; Chapter 13 requires debtors to work out a plan to repay what they owe.

Weinberg described people who have deferred taking crucial medications to pay their bills. The attorney drew a correlation between his profession and his wife’s: She’s a nurse who has participated in pediatric bone marrow transplants.

“By the time people come to either of us,’’ he said, “they’re in serious distress.’’

This is because they’ve watched six-figure salaries drain to zero, have used credit cards to pay off other credit cards, or have “raided’’ their retirement accounts, noted Lowell-based lawyer Louis Haskell.

He’s represented one woman who owed money on a repossessed car and maxed out her credit cards to help pay for her mother’s chemotherapy and medical bills.

“Everything has turned to garbage,’’ Haskell said of the economy.

Including, well, garbage. He had one client who filed bankruptcy after his job hauling trash nearly disappeared.

“Because there’s so little business, there isn’t as much garbage,’’ Haskell noted. “I don’t think we’ve had a recession so bad that there’s no garbage.’’

People often make their situations even worse in an effort to evade bankruptcy because it’s such a dreaded concept.

When clients come into Weinberg’s office to talk about bankruptcy, he takes a somewhat unusual poll: If they had the choice to go to the dental office next door and have all their teeth extracted in exchange for not having to file bankruptcy, would they do it?

Nearly all of them, he reported, would choose to go toothless.

It’s a sweeping sense of reluctance and shame he attempts to ease by pointing out that bankruptcy is permitted by the Constitution, and also appears in the Bible. Referring to debt as a form of bondage, one passage permits a discharge of debt every seven years.

Still, even if bankruptcy is an ancient practice, it has evolved.

Two hundred years ago, according to Jeffrey Kitaeff, a North Andover-based lawyer who teaches bankruptcy classes at the Massachusetts School of Law at Andover, debtors would lose everything, literally walking away with empty pockets.

Today, though, some assets can be protected up to certain amounts, such as a primary residence and some retirement accounts.

The goal is to give people a “meaningful, fresh start,’’ Kitaeff explained before cracking open his code book for a Tuesday evening bankruptcy course.

There are 35 students enrolled in the twice-weekly class; that’s more than double the 17 enrolled last semester, and almost triple the 12 students who attended two semesters ago, according to Kitaeff.

Cranston said the course will prove useful no matter what career path he chooses — as every lawyer deals with bankruptcy at some point. “It has such a wide impact on every issue,’’ he said.

For instance, financial services. That’s the line of work Mark Dell’Orfano is in, and he’s taking the class to augment his professional knowledge.

“I figured it would be a worthwhile endeavor to learn about the code, find out how bankruptcy works,’’ said Dell’Orfano, 35, who lives in Bedford, N.H.

“The bankruptcy system is misunderstood,’’ he said. “People look at it like ‘I failed in life.’ But it’s more about setting somebody back on track, hitting the reset button.’’