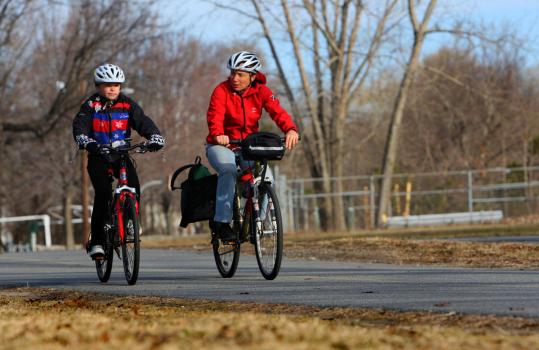 Lauren Hefferon (right) of Arlington rides on a bike path with her daughter, Valentina Rugiero, 10, to her school in Cambridge. (Photos By Joanne Rathe/Globe Staff)
By Kathleen Burge Globe Staff / March 21, 2010

If one were to name some particularly bike-friendly suburbs of Boston, Arlington might be first on the list.

No corner of the town is more than a few miles from the Minuteman Bikeway, the most popular bike path in the country. The town is home to two bicycle stores and a bike club whose members set off on long rides every Saturday and Sunday morning. A bicycling committee advises town leaders on bike issues.

And yet, until recently, school officials informally banned children from biking to school.

So far, none of the schools have bike racks. Last year, a pilot project to encourage children to ride their bikes to the Hardy School, the elementary school in East Arlington, was controversial.

“My view was, if you can’t ride to school in Arlington, then there’s no place you can ride to school in Massachusetts,’’ said David Watson, an Arlington resident and executive director of MassBike, a Boston-based bike advocacy group. “It’s already a bike-friendly community.’’

To those who want to encourage children to ride their bikes to school, the advantages seem clear: It’s better for the environment. And in an age of increasing fears about childhood obesity, they argue, it’s better for kids.

But not everyone agrees. Some parents and school officials are fearful about children sharing busy roads with minivans and SUVs ferrying children to school. (Most Arlington children live within a mile of an elementary school, so there are no school buses.)

Recently, MassBike began a statewide effort to encourage children to ride their bikes to school. In 2008, the first year of the project, 10 schools signed on for bike safety training for grades 4 through 8. Last year, 23 schools joined the project, including Ayer, Watertown, Westfield — and Arlington.

Watson, who believes children can bike to school safely in Arlington, argues that encouraging children to ride their bikes when they are young will make them more likely to continue to bike when they’re older and provide more choices for transportation. Now MassBike is beginning to train school teachers to teach bike safety to children, allowing the program to reach more students.

“The interesting thing is that a very large percentage of the traffic around schools is generated by parents dropping their kids off at school,’’ Watson said. “So you get this very circular argument where parents say, ‘I can’t let my kid walk or bike to school because of all the traffic.’ But they’re the ones creating the traffic.’’

Deborah D’Amico, principal of the Hardy School, came to the school four years ago when the no-biking policy was already in place. “I know this has been a hot issue in Arlington in recent years,’’ she said. “In previous years, it was forbidden and enforced as such.’’

But last year, after a group of parents began looking for ways to change the policy at Hardy, D’Amico became convinced that it was time to change. The parents came up with a “dismount zone’’ around the school, requiring children to walk their bicycles. Since the program began, D’Amico has been pleased with the results, though she thinks principals need to decide whether bike programs would work at their schools.

Now D’Amico and the parent group are talking about installing bicycle racks at the school.

In the Arlington program, parents helped launch the program last spring, with bicycle safety education for students, run by MassBike, and a bike-to-school week, where children tracked their mileage. They also publicized the dismount zone around the school.

Last year at the Hardy School, the elementary school children biked and walked a total of 1,000 miles over 70 cycling days, said Lauren Hefferon, an Arlington mother who helped bring the program to the school. Still, she said, the school system has declined to come out and endorse cycling to school.

“They’re just fearful if they completely support it and a kid gets hurt, it’s on their back,’’ she said. “I don’t think it’s grounded in actual statistics, but that’s their fear.’’

Arlington crossing guards are among those who believe biking to school is unsafe. Roseann Casazza, president of the Arlington Traffic Supervisors, argues that Arlington has heavy traffic, especially around the schools at drop-off and pick-up times, making biking on the streets dangerous.

Meanwhile, the town also prohibits biking on sidewalks — although the bylaw is not strongly enforced — because that can be dangerous for pedestrians, especially parents pushing strollers.

“When they started with this pilot, kids were riding the bikes on the sidewalk, and knocking some of the parents over who had carriages,’’ she said. “Parents were complaining. We truly feel that it’s an ‘unsafe’ issue.’’

So far, no other schools in Arlington have adopted the biking program. Now Hefferon, founder of a bicycle touring company, thinks her next project will be encouraging children and parents to bike to athletic practices. Nearly every athletic field in town is near the Minuteman Bikeway, she said.