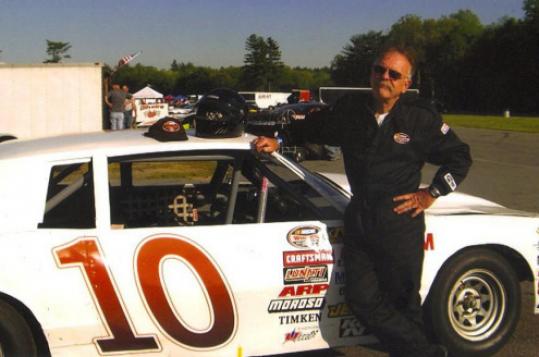 MEDWAY - No one knows it better than Hank Stott: The journey between fantasy and fruition has more than a few pot holes. Literally.

Last year, the Medway corporate trainer drove away with NASCAR’s 2009 Rookie of the Year trophy in the Limited Sportsman Division at Thompson International Speedway. Along the way, he lost a steering box, burned up an engine, and overspent his hobby budget by an amount he still avoids mentioning.

“I just wanted to get out and see if I liked it,’’ said Stott, 58, a married father of two grown children. “If I failed at it, or I was nervous the whole time, I’d quit. But when I got behind the wheel, my heart wasn’t jumping. I wasn’t sweating. It’s pretty tight in there, and I’m usually claustrophobic, but I was completely relaxed.’’

Stott will return to the driver’s seat for the 2010 season, which begins April 10. This time, he is gunning for the “Most Improved Driver’’ title. Helping him will be a growing list of sponsors, including Ashland’s Advantage Collision, which is giving his 1988 Monte Carlo a makeover.

“Hank makes people see racing the way I always remembered it: something to put a smile on your face,’’ said Advantage owner David Diamond. “If we think we can give him a little pride with a nice paint job, so much the better.’’

Despite the rookie moniker, Stott is no automotive dilettante. The son of a car dealer, he spent many a Thursday night at Thompson Speedway in Connecticut back in the ’60s, where his father, the late Alan Stott, raced his Jaguar convertible.

After graduating from high school in 1970, Hank opened the first of two successful auto reconditioning shops and ran it for more than 20 years. He then worked for two car cleaning product companies, penned a popular automotive column for trade magazines, and even took a job as a corporate trainer for .

All the while, his dreams led him back to the races.

“I had been telling my friends that I was going to do it for awhile, and then, last year, I realized it was time,’’ he said. “The kids were up and gone, and I found a car. It was time to do it or stop talking.’’

That Stott drove off with NASCAR’s Rookie of the Year award - after losing three weeks to a blown engine - says everything about his approach to the sport, said Russ Dowd, a longtime Thompson Speedway radio announcer who now serves as the track’s general manager.

“Many young drivers feel they have to impress their friends or families, and they drive way over their heads,’’ Dowd said. “Being more mature, Hank looked at the sport from a technical point of view, and he took his time learning how to do it right. He’s really a good guy to have around here. ’’

Before he entered his first race, Stott personally introduced himself to each of the veteran drivers at Thompson. Many had already seen him in the pit, helping his good friend Rick Fuller, a minor icon in the racing circuit. But none of them knew what kind of competitor Stott would be on those banked curves. Stott wanted to reassure them.

“They have seen guys like me come and go before - race, crash, and never come back again. I told them that I wasn’t there to cause problems, that I’d race clean - no bumping, no rubbing up against another car to pass,’’ he said. “To be honest, I knew I didn’t have the car to be able to be up front anyway.’’

Halfway through his rookie season, Stott proved his point. When his car’s engine blew up during a race in August, he narrowly avoided a pileup by maneuvering his vehicle to the track’s infield. Once the smoke had cleared, Stott was left with a lifeless car and a lot of questions. In silence, the other drivers helped him load it on a truck. Stott didn’t know where he would take it.

“It was the loneliest ride back from the track. I didn’t know where I’d find another engine or how I’d afford it,’’ he said. “But I knew I wasn’t done. I wanted to go out on my own terms, not because the car needed a new engine.’’

For the next three weeks, Stott’s team went to work, finding a new engine and mending the car’s body. Monte Carlo parts are not hard to find, but the expertise of his racetrack mechanics was hardly commonplace.

“You can have all the computers you want, but these old-school guys are really gifted,’’ he said. “They can align a car with a piece of string. They can fill a tank and change all four tires in less than 13 seconds. It’s brilliance. It’s cadence.’’

It wasn’t the first time that Stott was impressed by the knowledge of his pit-mates. Throughout the 2009 season, fellow drivers and other mechanics routinely gave Stott tips on how to adjust his tire pressure, suspension, and spark plugs to get the most out of his racing experience.

“The racing community is a nice bunch of folks who just happen to love racing,’’ he said. “I was really struck by how cordial everyone is, how they’ll drop what they’re doing to help out if they can.’’

A few years back, Toyota recognized his passion for the sport and tapped Stott to serve as its NASCAR liaison for the Boston region. Officially, this required him to arrange sponsorships for the New Hampshire International Speedway. Unofficially, it gave him another excuse to hang out with other NASCAR fanatics.

“I’ve been lucky,’’ he said. “I’ve been able to meet some of the stars in my sport - Kyle Busch, Michael Waltrip, Mike Skinner - people I respect because of their talent and their experience racing at that level.’’

So, are these the people he will conjure up before the next big race?

“To prep myself for a race, I try to find the funniest guy I know and get a good laugh,’’ said Stott. “They’ll make fun of my helmet hair, or get me with some inside joke. In the end, that’s what makes it worthwhile.’’

Stott has set up a website to chronicle his NASCAR ambitions, www.bucketlistmotorsports.com/home.