School where you live

Program helps children in homeless families keep up with their studies 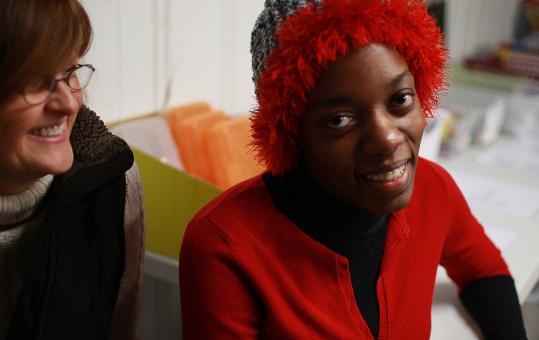 The basement command center resembled an office supply store as Hilary Sigismondi pulled crayons, markers, and pencils from baskets and bins, then loaded them into colorful new backpacks.

Later that day, she dropped them off for five homeless children at a Super 8 motel in Brockton.

“What these kids go through is amazing,’’ said Sigismondi, an AmeriCorps volunteer at School on Wheels of Massachusetts. “But I always stress to them, ‘The only difference between you and someone else is homelessness.’ ’’

The goal of School on Wheels, said Cheryl Opper, founder of the state chapter, is to relieve some of the stress of the most innocent victims of homelessness in Brockton, Stoughton, Middleborough, and, soon, in Norwell.

“We ensure they get what they need, when they need it,’’ said Opper. “If you are a kid used to getting everything secondhand, new is nice.’’

Like the emergency pair of sneakers delivered to a Canton High School athlete; help with forms and fees for a young woman registering for college; and one-on-one, after-school tutoring sessions for hundreds of children whose schoolwork suffers amid the chaos of group living.

Sometimes it’s the simplest things that people take for granted, like just fitting in, Opper said.

For a family in temporary housing, or on the move from one relative to the next, it’s not only impossible for children to put down roots, it’s more difficult to keep up with studies when attending several schools in one year.

That can prompt depression and esteem problems, Opper said, and plummeting grades.

School on Wheels is a program, not a transportation system, Opper said, “but, we go where we need to go. Nothing makes you want to help more than seeing a family pull up in a cab with everything they own in the trunk.’’

Opper, a resident of Easton, was looking for a change in her life after her teaching career ended. In 2004, as she tells it, life changed the day she picked up a copy of Family Circle magazine and began reading about Agnes Stevens, a retired school teacher in Southern California who started School on Wheels in 1993 after being astounded by the number of homeless children who weren’t in school.

At first the nonprofit group struggled to support its Massachusetts work through donations. But earlier this year, thanks to a $30,000 donation over two years from office supply company W.B. Mason of Brockton, Opper will have enough notebooks, calculators, and other necessities, along with sturdy cloth backpacks, for more than 2,000 children.

“That’s huge,’’ Opper said. “We want to make sure that every child has a fully stocked backpack and we can fill it up over the year.’’

Steve Greene, W.B. Mason’s president, said he met Opper socially late last year and gladly succumbed to her persuasive case for assistance. He said the donation could extend beyond the two years.

There are about 50,000 homeless children enrolled in public schools in Massachusetts, with an average age of 8. Most live in family shelters and foster homes, or with relatives or friends, but there are also more than 1,000 families living in motels.

In 2009, more than 10,500 families cycled through shelters, including Milca and Nephthalie Paul, the oldest children in a seven-member family of political refugees from Haiti who arrived in Massachusetts last fall.

It’s not easy to find living quarters for a large family, and the Pauls bounced from motels in Fall River and Brockton to the Conway House family shelter in Middleborough, run by Quincy-based Father Bill’s & MainSpring.

The women graduated from high school in Haiti, but spoke little English. They dreamed of furthering their educations, but weren’t sure it would happen. Milca, 20, wants to be a surgical nurse; Nephthalie, 19, a pharmacologist.

At the Conway House, Nephthalie, who now speaks in soft, French-accented English, said she watched younger children with a School on Wheels tutor, and wanted to join them. She said the shelter was noisy and crowded, “but it was a positive place for my family. We learned to speak English better, and we learned about other people’s cultures.

“One day I just took a look to see what the kids were doing,’’ she said. And School on Wheels child advocate Emily Ring invited the Pauls to stay in the class, and she gave the women a map of the United States.

As the weeks passed, they began learning the states. And then moved on to a book of presidents. And before they knew it, the Paul sisters were enrolled in College is Possible, a School on Wheels program that focuses on older homeless students who may be adrift after high school.

The family found an apartment in Brockton, and in January the sisters registered for classes at Massasoit Community College. Their joy was tempered later in the day, however, when they learned Haiti had been devastated by an earthquake.

“No one could sleep,’’ she said. “Our community was lost. We lost our school, friends, and teachers.’’

Now Nephthalie said she can’t thank School on Wheels enough as she makes America her new home. The program not only provided her with its trademark backpack, filled with a calculator and other items suitable for an older student, it also offered tutoring in English and American history, and gave her and her sister help with college paperwork and fees.

“Any program that supports kids in crisis and does it in a humane way makes sense,’’ Malone said. “They are certainly meeting a need, in this economy especially.’’

In a January blog posting, Opper wrote about the Paul family:

“Three months ago two sisters were graduating from high school in Haiti; two months ago they were living in a family shelter in Middleborough with their parents and siblings, one month ago their family moved into an apartment in Brockton; and one week ago Milca and Nephthalie were attending their College Orientation Day. I guess their mom was right; things happen for a reason and we should all look for the good in the obstacles we face every day. I am grateful to our two college students who reminded me of this important life lesson.’’