One computer for every student

Despite economy, schools try to construct programs for a high-tech future 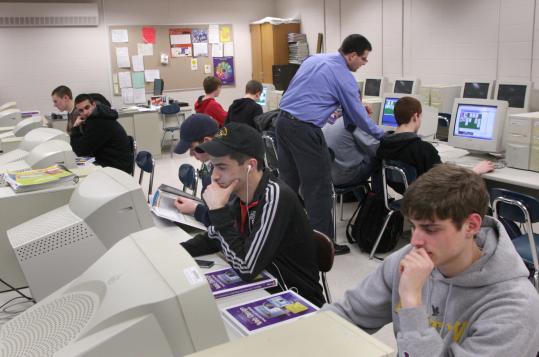 Students work in a website design and publishing class at Holliston High, where administrators want to provide a computer for every student. (Photos By Bill Greene/Globe Staff)
By Lisa Kocian Globe Staff / February 11, 2010

Anyone who has ever listened to the incessant tap-tap-tapping of a teenager texting on a cellphone knows that youths these days are wired. Whether by desktop, laptop, cellphone, or smart phone, many students spend their nights and weekends online and in touch.

But much of that interactivity is frozen like a bad computer program the minute they walk into school. In many schools, if a student fires up a smart phone in the middle of class to check something on the Internet, they could be in trouble.

“We say if they pull that out, they get detention,’’ said Michael Cournoyer, Holliston High School’s principal. “It’s kind of silly.’’

As of two years ago, just 1 percent of Massachusetts schools had a computer for every student - even though state guidelines call for 100 percent.

But that could change as Holliston, Natick, Hopkinton and other communities look to integrate technology more intimately into the classroom. They face hurdles, most notably the cost of starting and maintaining such programs.

It’s still early in the plan, but school leaders in Holliston hope to provide a laptop for every student and teacher at the high school, starting with the freshman class of 2012. The transition kicked off last month, when 20 of the high school’s teachers received an Apple MacBook, Superintendent Bradford Jackson said.

Hopkinton is trying out one-to-one computing this year by providing laptops to four classrooms of freshmen. And Natick is eyeing the latest Apple product, the iPad, among other devices, in search of a route to a better marriage of education and technology.

If Natick voters next month approve a tax increase to pay for a new high school, Superintendent Peter Sanchioni said, he hopes the building would feature a one-to-one computing environment.

The district already started along that path a few years ago by providing teachers in every grade with laptops, said Sanchioni. And it has ordered three of Apple’s new electronic tablet for administrators to sample.

Colleges expect students to be agile with technology, he said, and studies suggest that technology advances a student’s learning ability.

“We would be negligent if we didn’t pursue it,’’ said Sanchioni. “We need to do our job here.’’

But Jeffrey Silverstein, a member of the town’s Expense Control Task Force, said he is skeptical about the benefits of providing a laptop to each student.

“To me it’s sort of ridiculous to go out and buy computers for kids that already have them,’’ he said. “How much value are these computers actually going to contribute? The rate of computer literacy for our kids is pretty high already, so I’m not sure what the benefit would be of every kid having a laptop.’’

However, Silverstein said, he would be in favor of providing computers for home use by students who can’t afford one.

Some area school districts have already made strides, according to June 2009 state data. Those with a ratio of two students per computer or lower include Carlisle, Concord, Concord-Carlisle, and Lincoln-Sudbury, along with Minuteman, Assabet Valley, Blackstone Valley, and South Middlesex regional vocational school districts.

Educators caution that for any technology initiative to succeed, teachers must be on board and receive training to take advantage of the new equipment.

Teachers who have already received laptops in Holliston have been asked to create a unit or lesson using the new technology, and share their experiences with other teachers, Superintendent Jackson said. If the pilot program goes well, and if resources are available, laptops would then go to all high school faculty next school year, in preparation for the ninth-graders of 2012.

“While I am convinced that this is the way to go and this will impact students in a very positive way, this is admittedly not the best economic times to be discussing new and innovative ideas in education,’’ he said.

Jackson said it’s highly unlikely the state would pay for the initiative, so it would likely require some combination of school district and parent dollars to make the vision a reality.

Most schools in the state receive some federal money for technology through three programs. Enhancing Education Through Technology has $2 million to distribute statewide this year, but only about $500,000 next year, according to the state Department of Elementary and Secondary Education. The federal stimulus package is offering another $10 million for school technology statewide this year, and about $2 million from No Child Left Behind has been distributed this school year.

Maine is at the forefront of technology in the schools, with all public school students in the seventh and eighth grades receiving a laptop computer. This year the program expanded to more than half of the state’s public high schools as well, said David Connerty-Marin, a spokesman for the Maine Department of Education.

The Lilla G. Frederick Pilot Middle School in Dorchester has had a one-to-one laptop program for about three years, and has become a national model for how it can be done, said Damian Bebell, an assistant research professor at Boston College’s Lynch School of Education. Last month, Bebell and some of his colleagues published studies in a special issue of the Journal of Technology, Learning, and Assessment that found students in one-to-one computer settings outperformed peers in traditional classrooms.

Bebell examined the Berkshire Wireless Learning Initiative, a three-year pilot program that provided laptops to students at five middle schools in Western Massachusetts. He found that the students earned higher scores in the English language arts portion of the statewide MCAS exam.

“They’re willing to write longer,’’ Bebell said of the Berkshire students. “There was also increased student engagement. A lot of the teachers took this as an opportunity to revisit their craft,’’ he said, and “found a lot of neat resources to share with kids.’’

Math scores, however, were flat.

In the 18 months since the Berkshire pilot program ended, it has suffered because of a lack of finances, he said. And many schools, locally and nationally, want to push forward but are asking whether they can afford it, said Bebell. Technology initiatives don’t always work, according to Bill Tucker, managing director of Education Sector, a nonprofit policy think tank based in Washington, D.C.

“There’s clearly been projects - especially when you consider cost and diversion of time and effort - that haven’t shown student gains,’’ he said.

Still, said Tucker, classroom technology can be “transformative’’ when teachers are well trained and when it is well integrated into the curriculum.

“This is less about the boxes that you put on students desks and a lot about the implementation,’’ he said.

Educators in Hopkinton, Holliston, and Natick all say professional development would be a high priority. They are bullish about adding laptops to their classrooms, saying they would give students access to a tremendous number of resources online, from entire courses to alternative explanations. One-to-one computing also changes the school schedule, they say.

“You are not confined by the walls of a school or the boundaries of a school year,’’ said Jack Phelan, Hopkinton’s superintendent. “It really is learning anywhere, anyplace, anytime. It allows students more time if they want to participate in job shadowing or if they want to have an internship.’’

The teachers in the four classrooms of Hopkinton freshmen who have laptops are reporting increased collaboration and more writing, Phelan said. Last month, district administrators made a presentation to the School Committee to set up a one-to-one pilot program for all freshmen when resources become available.

Phelan said he knows he needs support from parents because they might be asked to fund all or some of the laptops. But there is a long way to go before that is decided. Administrators aren’t even positive what that one-to-one device will be.

“It may not be a laptop,’’ said Phelan. “For all we know it might be this new iPad, when it’s released.’’