The heirloom that they fear 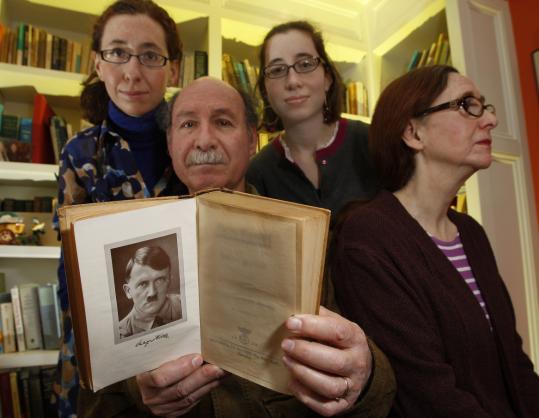 Jewelry. Real estate. Artwork. These are possessions that ignite many a family feud over an inheritance.

"Mein Kampf?" Maybe not so much.

But such is the situation in my family.

We’re stuck on whether anyone should inherit a copy of Adolf Hitler’s political manifesto that my great-uncle grabbed from the rucksack of a German soldier he likely killed in battle in 1944.

Some mystery surrounds the book, but this much is clear: for decades, "Mein Kampf" has been an unwelcome possession in my parents' home. Yet whether we should continue to keep it, as an unusual heirloom, or donate it — we are Jewish, after all — remains a question far from settled.

My father, Fred Mandell, 67, a business and innovation consultant, is the agitated guardian of the book. Its title means “My struggle,’’ and Hitler wrote it in prison in the early 1920s after a failed attempt to overthrow the government in Munich.

For much of my dad’s life, he has displayed the book, a 1937 edition printed in Germany, among his vast collection of Jewish history books.

“I remember being conflicted between throwing it out . . . and putting it in a prominent position, as a way of saying ‘You can’t hurt us. We won. We outlasted you,’ ’’ said my father. His uncle who brought the book stateside, Eddie Cohen, died in 2001.

My father’s decision to keep the book was an act so personal that he rarely spoke about its existence, let alone why he felt compelled to display it - always upside down - on the bookshelf.

“I wanted to have dominion over this book that represented so much more than a book or ideology. It represented the fate of Jews,’’ he said.

But now my father’s ready to be done with the book and the space it’s taken up on his bookshelves, first in Brookline, then Newton and now Needham, where he lives with my mother.

After raising three children, my father said he’s done his part to affirm Jewish continuity. And the book - outlining Hitler’s venomous hatred of Jews - is no longer a focal point in his life.

But we’re far from agreement on what should happen to it.

My brother and I argue that the book should remain in the Mandell household as an artifact of family history. Its existence is a reminder of history on both a family and global level.

Yet my mother doesn’t need such a reminder.

Her father escaped Poland in 1939 by hiding in a passenger train. And his entire extended family perished in the Treblinka death camp. So she has wanted Hitler’s book out of the house since she married my dad 40 years ago.

And then there’s my sister Becky, the baby of the family, who didn’t know of the book’s existence until I brought it up this month. She said she’s afraid of the book, but can’t express why.

We didn’t use to talk about the book much. It’s hard to reconcile its historical trajectory - snatched from the battlefield, a spoil of war brought home by Eddie Cohen of Brooklyn, N.Y. - and its current existence on a bookshelf in a suburban home.

But ever since my father told me in quiet conversation last fall that he was in talks with a librarian at Brandeis University, where my sister and I went to school, to donate the “Mein Kampf’’ to its special collections department, the book has become a central discussion point. Is the book better served at home, where my family members are mostly afraid of it - but feel an attachment to its uncertain backstory - or in an institution where it can be preserved and used for research?

There’s only gut emotion for an answer.

“Why wouldn’t Dad just keep it? Just keep it,’’ said my brother, Jake Mandell, 34, a radiology resident at Brigham and Women’s Hospital. “Tell Dad he can’t give away the book or I’ll get mad.’’ My brother said the book is an object he can eventually show his son - now only 4 months old.

“It brings home the trueness of the Holocaust, a physical remembrance of it,’’ Jake said.

Sarah Shoemaker, the special collections librarian at Brandeis who spoke with my father last fall, said a manuscript’s value can rest in something more abstract than text on the page.

“Sometimes it’s the history of the item itself that speaks to the researcher,’’ she said.

Yet my mother, Karen, 61, finds no such value in the book. It’s as if the book itself carries a contagious disease, she said.

“I would literally have to scrub my hands with alcohol if I touched it,’’ she said. “My family was all killed on my father’s side - except for him. And there was the book that promulgated it.’’

My mother, a writer, recalled how she overcame her revulsion to the book with the help of some cardboard.

As a newlywed living in Brookline, my mother wanted to read “O Jerusalem.’’ The problem? It was nestled next to Hitler’s autobiography on the shelf.

In 1942, Eddie Cohen was drafted into the Army, where he served as a private first class. He fought in hand-to-hand combat in France and Germany. And in one of those battles he grabbed “Mein Kampf’’ from the belongings of a German adversary.

“I get the feeling he said he was actually responsible for the death of that soldier,’’ said Eddie’s son, Michael B. Cohen, a lawyer in Fort Lauderdale, Fla.

He took the book, according to Michael Cohen, as a symbolic act.

“It was almost as if saying ‘Here I am, a patriotic American, a Jewish man and here I am defeating Nazis.’ ’’

Upon returning home after the war, with a Purple Heart for the shrapnel in his leg, Eddie gave his war souvenirs - also including a Nazi helmet and bayonet - to his sister, my dad’s mother, who lived on Long Island. My father was a toddler then.

The helmet and bayonet are long gone. The “Mein Kampf’’ is all that’s left from Eddie’s European tour.

Rudolph Binion, a professor of modern European history at Brandeis, described “Mein Kampf,’’ published in 1925, as a bestseller in Germany during the Nazi reign. It was a book that most Germans owned but few thoroughly read.

“In general it’s too much of a bore,’’ said Binion. “It didn’t make much headway on its own.’’

When Hitler came to power in 1933, his head of publications launched “Mein Kampf’’ into a “must-have, must-own for the Nazis,’’ according to Binion. And millions of copies were sold. Traditionally, it was a popular wedding gift or get-well present: “Like a bouquet of flowers when you visit a sick room,’’ he said.

Today, “Mein Kampf’’ is not allowed to be printed in Germany.

The book Eddie brought back from Europe was indeed a wedding present for the man who died on the battlefield, according to an inscription on the front page, which my brother translated: “The newlywed couple (first names unclear, last name Tefs): with best wishes for happiness and blessings, hereby presented by the city of Luebeck on April 29, 1938. The Mayor of Luebeck: Dr. Drechsler.’’

The page after the inscription shows a glossy photograph of Hitler.

I asked Binion whether it was common for German soldiers to bring a copy of “Mein Kampf’’ to the front.

“It wasn’t standard equipment,’’ said Binion, who added that perhaps the soldier treated the book as a good-luck charm. “I doubt he would have spent his few leisure hours reading ‘Mein Kampf.’ ’’

For now, the book that is a reminder of my great-uncle’s journey remains in my parents’ house. My father is quietly amused that his two oldest children have taken an interest in it. My mother, I think, has resolved herself to living under the same roof with it. And my sister remains unable to articulate her feelings about the book.

It’s unclear where this family possession will end up.

I asked him where in his home he’d keep the book.

Perhaps an object to be discovered, one day, by his son.