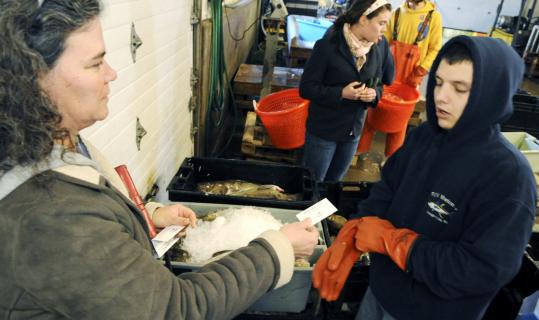 Wendy Beagen hands in a voucher to pick up her share of shrimp from laborer Darrell Moore at the Yankee Fisherman’s Cooperative in Seabrook. (Lisa Poole for The Boston Globe)
By G. Jeffrey MacDonald Globe Correspondent / January 24, 2010

SEABROOK, N.H. - As winds whipped through Seabrook Harbor on a frigid January day, Lissa Vogt of Haverhill, Mass., had plenty of motivation to brave the elements and claim the prize waiting for her at the end of a pier.

For $72, Vogt had jumped at a first-time opportunity to be a shareholder in the seasonal shrimp harvest off New Hampshire’s seacoast. Now the time had come to reap half of her reward: 20 pounds of shrimp - enough to share with friends and family, and fresher than any she’d find in a supermarket.

“It’s healthy, it’s fresh, and we’re supporting a local industry off our own shores,’’ Vogt said. “I want these fishermen to succeed. Some have been doing this for generations, and I don’t want to see it die out.’’

About 80 area households are eating extra helpings of shrimp this winter as they participate in a pilot program designed to help local fishermen, consumers, and the environment. They’re members of a new community-supported fishery, launched this month by the Yankee Fisherman’s Cooperative, which includes more than 60 fishing vessels on the seacoast.

The fishery functions on the same model as community-supported agriculture, which gives shareholders a stake in a farm’s weekly harvest in exchange for a cash payment before the season begins. In the seafood version, Yankee’s members are entitled to eight weekly pickups in January and February, when seasonal migration patterns bring shrimp within a few miles of the shoreline.

Experimental community-supported fisheries are gaining traction in the region as fishermen, accustomed to selling at low prices to wholesale processors, seek a more lucrative model to help them tap their neighbors’ growing appetites for local food. Even in these early stages, stakeholders are heartened by the strong interest that burgeoning projects have attracted.

Last summer, Gloucester fishermen supplied whole fish, such as haddock and cod, for Cape Ann Fresh Catch, a new community-supported fishery run by the Gloucester Fishermen’s Wives Association. Fishermen wondered at first whether consumers would be interested in fish delivered with heads and fins intact, according to Niaz Dorry, director of the Northwest Atlantic Marine Alliance, an advocacy group for fishermen and responsibly harvested seafood.

But the response was better than anyone expected. Some 1,100 consumers signed up for the summer, and another 600 recently joined the fishery’s winter program.

In the summer, fishermen received $2 per pound for their catch, which is top dollar, since wholesalers sometimes pay as low as 30 cents a pound, Dorry said.

“We truly got overwhelmed,’’ said Dorry, who helped launch the Cape Ann community-supported fishery. “We ended up having back-to-back seasons because so many people were interested.’’

Interest in the programs has been growing in recent years since early ones proved viable in North Carolina and Port Clyde, Maine.

Organizers list several environmental benefits. Unlike some foreign vessels that supply area supermarkets, local boats must comply with regulations to use nets that allow unwanted fish to escape, according to Yankee’s manager, Bob Campbell. What’s more, local seafood incurs a relatively small carbon footprint since it isn’t shipped thousands of miles to market.

There is a catch: members need to do the work of removing shells and heads. But enthusiastic members aren’t deterred.

“They’re delicious,’’ said Doug Hall of Weare, as he left a packaging area where laborers in orange rubber overalls were handing out shrimp by the bagful. “I just break the heads - break them in half and pull the meat out. If there’s a little bit of egg stuck on them, that’s OK.’’

“I’ll freeze these and pull them out for the Fourth of July!’’ exclaimed Pat Hall, also of Weare.

Those with the most to gain from community-supported fisheries, also called CSFs, may be the fishermen.

By raising awareness of local fish options, they hope to increase demand for their catches over time.

“The whole idea of this is to get better prices for the fishermen,’’ Campbell said. “We’re hoping that between farmers markets and the CSFs, we can sell [shrimp] for so much more money that we’re able to average that in and at least bump up the price paid to the fishermen.’’

At this point, community-supported fisheries aren’t doing much to lift the economic tide for all fishing boats that struggle to make ends meet.

Even with the Yankee program in the mix, more than 95 percent of what shrimpers are catching goes to wholesale processors, Campbell said.

But programs may help demonstrate sufficient demand to justify the creation of a federally funded seafood processing facility in southern New Hampshire, according to Ken LaValley, a fisheries specialist with the University of New Hampshire Extension Service.

Such a facility would allow fishermen to sell more fish locally, instead of shipping nearly all their catch out of state, as is the case today.

In the meantime, LaValley said, the Yankee program helps make fishing safer by enabling at least a couple of fishermen to spend more of their regulated fishing days close to shore.

“People in New Hampshire only have to go 1 to 3 miles off the coast’’ to harvest winter shrimp, LaValley said. “That is huge compared to steaming out for four hours [and fishing 20 miles offshore for groundfish]. The risk is much more minimal.’’

For now, some commercial fishing families say the Yankee program isn’t making a difference for their businesses. Padi Anderson of Dover notes that her family’s business hasn’t received higher prices or any other benefits as a result of contributing shrimp to the program.

“The price I get from Yankee is the same as I’d be getting anywhere else,’’ said Anderson, noting that her family’s vessel is not a member of the cooperative.

But Anderson nonetheless sees the community-supported fisheries concept as a promising one. She says her family receives as much as a 20 percent premium on fish they sell to Eastman’s Fresh Catch, a CSF that launched last summer and distributes filleted fish seasonally at local farms and farmers markets.