Needham’s Maria Lando lives in a world of numbers, and wants others to share her love - and know no fear 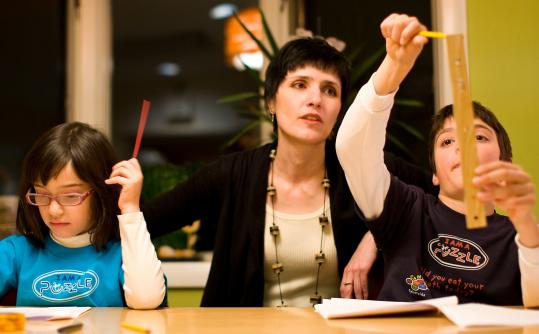 When Maria Lando was pregnant with her second child, she and her husband decided to buy a house. But it wasn’t clear where they should live: Lando worked in downtown Boston, her husband worked in Charlestown, and their son’s day care was in Newton.

So they searched for houses along a wide swath of suburban Boston, going to dozens of open houses, looking for good schools and a home that would cut down the two hours a day they were spending driving back and forth.

“And then waiting for yet another open house, sitting in the car when my son was asleep in the back, we were like, ‘This is insane,’ ’’ recalls Lando, who was then pregnant with their second child. “It should be a mathematical problem.’’

She grabbed a piece of paper and starting jotting down equations to figure out where they should live. Her conclusion: They should move close to their son’s day care. While they each drove to and from their offices each day, they had to make two trips to day care - one to drop their son off, another for pickup. The decision helped narrow their search, and they soon found their dream house in Needham.

This was more than six years ago, and in 2008 Lando launched her blog - and identity - as the Math Mom (www.themathmom.com). Her motto: “Life is a puzzle. Solve it with numbers.’’ She wanted to encourage other people - especially mothers - to learn to love math.

Lando was born in Russia and grew up with an engineer father who passed along his love of math. She went to a special math high school before getting her degree in applied mathematics and computer science and moving to Israel for additional studies. So she was surprised after she and her husband emigrated to the United States and learned that, here, math inspires some fear and disgust.

“Every mom would tell me that she is afraid of math, she never had a good math teacher,’’ Lando said. “And yet, she is doing a lot of this math every day. So that is when I started writing about this because I saw there is this brilliant, really fun, cool math in everyday activities. And a lot of people just do not see.’’

Now Lando has 2,000 to 3,000 viewers each month reading her blog, and is rolling out a line of Math Mom T-shirts, mugs, and puzzles for parties. Although she always loved math, Lando said, writing the blog made her dedicated to sharing that love with her children, now 6 and 9. When her daughter, asked recently about negative numbers, Lando’s first instinct was to tell the 6-year-old that she was too young to understand. Instead, she likened them to carrots, which grow underground, while other plants (and positive numbers) grow up instead.

“I see an amazing effect on our kids,’’ Lando said. “I was doing math before. But now when I started doing the math mom, we discuss puzzles at home, I see that they talk puzzles to their friends. I see that they are really excited.’’

Lando, who has worked in a number of math-based jobs, from creating special effects in movies to working with medical systems that use radiosurgery to kill cancer cells, likes to say that math has given her access to a world she otherwise would not have seen.

“It fed and dressed me, led to travel, men, and lavish parties and even Cuban cigars,’’ she wrote on her blog. “It has placed my name on a movie screen, put my work in museums, and allowed me to manipulate cells deep inside the human brain.’’

Lando has often stumbled upon math in unexpected places. When she was in high school, she was at a party late one night when she heard a friend calling his mother to explain why he wasn’t yet home. Then she heard him solving a math problem over the phone. When she asked what he was doing, he said his mother was very worried about him driving drunk and gave him a math puzzle to test his sobriety.

Her son suggested one of the math puzzles that would later appear on her blog when they were at the playground. He asked her where in the range of a playground swing’s motion he should jump to get the longest flight in the air. Her father happened to be visiting from Israel, where her parents now live, and he knew the answer because he worked in a military institute in Russia.

“It is a very similar problem to the matter of where to fire a missile,’’ Lando said. Jump when the swing is low, and the flight will be long but the drop will be slight. Jump at the peak of the swing’s arc and the drop will be longer but the forward movement will be small. The answer, she said, is to jump in the middle, giving the longest flight by combining both height and distance.

For readers trying this at home, she had one more useful hint: As soon as your feet hit the ground, start running.