Special ed spending rises, as parents defend it as necessary 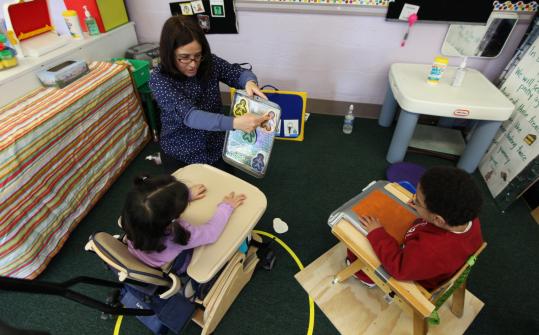 Special education costs have soared in local school districts during the past five years, driven by higher program costs, continued demand for those programs by parents, and cutbacks in state and federal aid.

The costs have grown at double the rate of regular school budgets in about half of the area’s school districts, even as schools have been forced to cut other services and lay off staff. Special education takes up about 20 percent of overall budgets statewide.

Many students have more severe disabilities than those in past years, requiring more expensive programs, officials said. That partly reflects better medical care that has saved the lives of infants, some of them born prematurely or with severe disabilities or both, who might have died a generation ago. The survivors often struggle with difficult physical and emotional problems.

State aid has been reduced as well, with the financial burden shifting more to the school districts. For example, the state in previous years had paid up to 70 percent of expenses for the severely handicapped, but that amount has slipped to about 40 percent. Federal grants have dried up, too, although federal stimulus money has helped stave off some layoffs.

But because many special education programs are mandated by state or federal law, it is difficult to cut from those budgets. Instead, school officials turn to the regular budget for cuts, said officials.

“If you look at the budget busters, they’re special education and health care costs,’’ said Thomas Scott, executive director of the Massachusetts Association of School Superintendents. Most new money going into school systems during the past five years has not gone into traditional education but rather into special education, health care, infrastructure, and energy, he said.

Costs have risen, even as the percentage of students with special needs has remained steady at about 17 percent statewide. The Globe looked at data from 2003 and 2008 from the state Department of Education.

Everyone benefits when the disabled become more independent, she argued. Disability costs just increase the longer they are pushed back.

“It’s cheaper for everyone,’’ she said.

She acknowledged that the bills can be tough for school districts to swallow. But for the most part districts do the best they can, even as parents have become more knowledgeable and assertive about advocating for what is best for their children.

At the Rodman Center in Canton, Marla Colarusso, administrator of student services, pointed out a teacher and a paraprofessional who were working with two 4-year-olds with multiple disabilities.

“That’s why it’s so expensive,’’ she said of the one-to-one teacher-pupil ratio. “Specialized teaching, specialized instruction.’’

The 4-year-olds, a boy and a girl, attend a class in The Education Cooperative, which serves students from 16 area towns. The regional public program educates students ages 3 to 22 who have moderate to intensive disabilities. It’s cheaper and more efficient to teach special education students there than in a private school, officials said.

It might cost $40,000 a year to educate students in the program, compared with nearly $70,000 elsewhere, said Colarusso. The program has about 140 students.

At Southeastern Regional Vocational in Easton, the school budget climbed 15 percent in five years, while special education costs shot up nearly 170 percent. Special education now accounts for about 4.5 percent of the budget, up from about 2 percent.

The surge is driven by more costly technology and special requirements, said Superintendent Luis Lopes. Some students need laptops with special software or one-on-one help. A trained paraprofessional can cost $35,000 to $45,000 a year, with benefits, he said.

Advocates argue the increases are not as large as they appear because some of the money is later reimbursed by the state and federal governments, which tends to moderate the increases. But even without that factor, the budgets would still be increasing at a faster rate than regular school budgets, they agreed.

Richard J. Robison, executive director of the Federation for Children with Special Needs, said school districts can be boxed in when it comes to budget cuts. Because of state and federal special education mandates, such programs can’t be cut without negotiating with parents. Instead, schools slash elsewhere, said Robison, who also sees the cost issue from the other side, as a Sudbury School Committee member.

“When you’re doing overall budget reductions, you’re more likely to reduce those things you have discretion over,’’ he said. “That means bigger cuts in what is viewed as less essential.’’

Also, school districts that have the most children with problems - generally urban or rural districts - often have the fewest resources for dealing with the issues, said Dr. David Urion, director of the Learning Disability Program at Children’s Hospital in Boston.

And Massachusetts has smaller school districts than many other states, so costs cannot be shared regionally.

Matt Carroll can be reached at mcarroll@globe.com.


* Does not include special education costs FOR A COMPLETE LIST, SEE PAGE 6
SOURCE: Massachusetts Department of Education