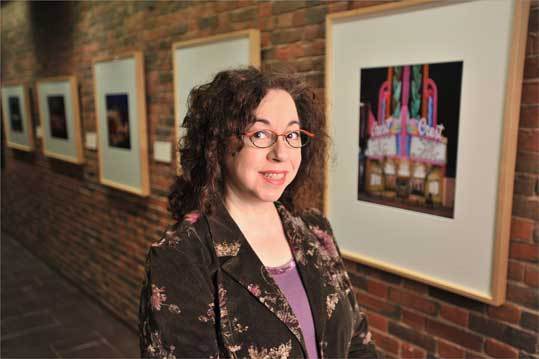 The movie theaters of the 1920s and 1930s might be remembered for the stars who appeared on the big screen, but it’s the lavish art offered by the buildings themselves that Boston photographer Stefanie Klavens is trying to record before it disappears.

From blazing neon marquees to ornate ceilings and intricate fixtures, and even popcorn machines, she has been photographing the dwindling number of theaters designed in an Art Deco style during Hollywood’s golden age.

“There is nothing like going to the movies in a grand old theater,’’ said Klavens, who has spent more than a decade traveling the country to photograph as many of the remaining theaters as she could find.

A collection of her images is on display in “The Art of the Movie Theater,’’ at the National Heritage Museum in Lexington until May 16. Admission to the Marrett Road museum is free.

Hilary Anderson Stelling, director of exhibits and audience development at the museum, which does not charge admission, said Klavens’ photographs seem timeless and provide a way for people to see themselves in history by remembering going to the movies.

“They are evocative of another time,’’ Anderson Stelling said.

Klavens, who lives in Boston’s North End, said her interest in old theaters began when she was a teenager in Maryland and going to see movies at Baltimore’s famous Senator Theatre. At the time, Klavens said, she didn’t even know what the term Art Deco meant, and didn’t understand the historical significance of the theater’s architecture.

“I just knew it was special,’’ Klavens said.

Today, the Senator is the last single-screen theater in Baltimore, and it was the first theater Klavens photographed.

Since then, Klavens has photographed iconic theaters, such as the Orpheum in Los Angeles, and hidden gems, such as the Sands in rural Brush, Colo., where a vintage popcorn machine is still in use.

Many of the theaters she photographs have since closed, or are now being used as performing arts venues instead of movie houses.

She photographed the Palace Theatre in Lockport, N.Y., in 1999, the same year it was shuttered. It has since reopened, but as a performing arts house, Klavens said.

“I’m glad I was able to photograph the Palace when it was still a bona fide movie theater,’’ Klavens said.

Even in Los Angeles, Klavens said, the number of old movie theaters is beginning to dwindle. Two of the theaters featured in the museum’s exhibition, the Orpheum and the State in downtown Los Angeles, are no longer used primarily to show movies.

In the Boston area, Klavens said, Brookline’s Coolidge Corner Theater may be the only Art Deco venue still being used primarily as a movie house. Klavens said she hasn’t photographed the theater yet, but she hopes to soon.

While she has taught principles of digital photography at the New England Institute of Art in Brookline, Klavens said, she prefers to photograph the neon facades and the ornate interiors of the old movie theaters using long-exposure film stock. The more traditional method of photography allows her to catch more light and reveal design aspects that aren’t always noticed with the naked eye, she said.

By using long-exposure film, Klavens said, she’s also able to capture some of the ambience that a moviegoer would experience.

And it’s the experience of going to the movies that threads much of her work together.