Warm fall may have misled turtles

Some being found along South Shore 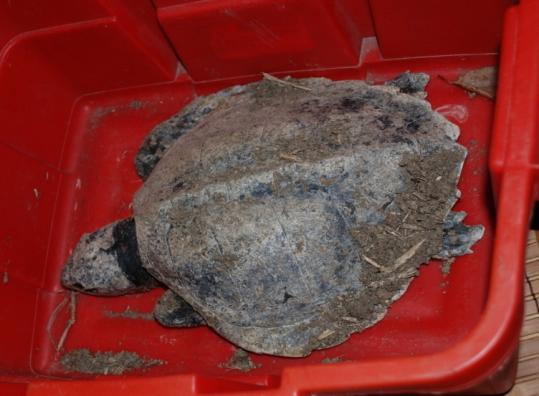 WEYMOUTH - Several specimens of an endangered sea turtle have been found on the South Shore, creating a bit of a mystery for members of the New England Aquarium staff.

Aquarium officials say that finding the Kemp’s Ridley sea turtle in this area may be unprecedented. The latest find, the carcass of one of the turtles, was made in Weymouth last week, following the finding of two others in Hull and Quincy.

“When you get three of anything, you start paying attention,’’ said aquarium spokesman Tony Lacasse.

Biologists say that each year, juvenile Kemp’s Ridley turtles make their way from the Gulf of Mexico to the Cape Cod area, where they feed on crabs before returning south around Labor Day. There are always some who linger and, as the temperature drops, become cold-stunned, or hypothermic, floating on the waves at the mercy of wind and current.

This has been a big year for the sheer number of Kemp’s Ridley turtles, said Lacasse, who conjectured that it might be because the start of fall was mild and lulled the turtles into staying when it was time to go.

Another possible reason is that a local current deposited the turtles in Cape Cod Bay in late summer, leaving them a window of only a few weeks to figure out how to get out of there. If the turtles have not started south by mid-October, their ability to swim is reduced. By November, when temperatures drop to 50 degrees and lower, they are in real trouble.

Lacasse said he wondered whether the turtles that found their way to the South Shore might have originally been situated near the top of Cape Cod Bay and were blown into Boston Harbor before eventually drifting to the South Shore.

Stragglers luckier than the ones found in Hull, Quincy, and Weymouth were discovered close to the Cape after Thanksgiving. A total of 77 were rescued and taken to the aquarium by staff and volunteers at the Wellfleet Bay Wildlife Sanctuary of the Massachusetts Audubon Society.

Most of them are now recuperating under care of biologists at the aquarium, who have been slowly restoring their body temperature and giving them antibiotics, so that pathogens that have been dormant in the hypothermic state do not have a chance to quickly multiply.

The ones that were not rescued were probably caught up in currents that took them further out to sea or swept them inland, where they landed on shore and could not withstand the cold temperatures, one of the possible scenarios for what might have happened with the specimens found recently.

A necropsy should reveal more clues.

Constance Lindner can be reached at clindner2@gmail.com.