Renowned locally, fife and drums corps is headed down under 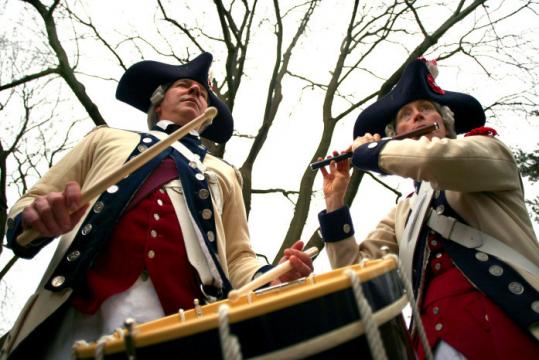 MEDFORD - During the Revolutionary War, the fife and drum were not merely the basic means of communication between troops and their commanders, but also a means of boosting troop morale.

Since 1982, a Medford-based group has preserved the music of the era and inspired audiences with its performances locally, nationally, and increasingly on the international stage.

Now, the Middlesex County Volunteers Fife & Drums will serve as musical ambassadors on their longest journey yet, performing in February as part of a cast of 1,500 at each performance of the Edinburgh Military Tattoo in Sydney, Australia.

Jim and Sarah MacConduibh of West Medford are two of the mainstays for the Volunteers, whose website says they are about “history and music, education and entertainment.’’

Jim joined the group in 1985 and has been director since 1987; his wife joined in 1984 and is both the manager - basically, she “makes everything happen,’’ as she puts it - and the leader of the fife section.

The Volunteers have been touring in some fashion since their inception, but it was the group’s breakout appearance at the world-renowned Edinburgh Tattoo in Scotland in 2007 that took them to another level. Sixty-five Volunteers participated in the performance, which played to a live audience of 217,000 and 100 million international television viewers.

“We were the first fife and drums to play there and the first American group in 16 years to participate; it was a great honor and I think we measured up,’’ said Jim MacConduibh, who has been a drummer since he was 10. He has performed professionally with several groups and was a drummer and instructor for the Revere-based 27th Lancers drum & bugle corps.

Last July, the Volunteers were a crowd favorite at the Royal Nova Scotia International Tattoo in Halifax, N.S.

“It was the first US group we’d had in almost 10 years and it was great to have the Stars and Stripes represented again,’’ said Thomas Grotian, marketing manager for the Tattoo. “The audience loved them and gave them a great reception. They made many friendships with the other cast members and we’d love to have them back again some day.’’

The Volunteers range in age from 18 to 65, have a variety of vocations, and hail not only from Eastern Massachusetts and southern New Hampshire, but also from New York, Connecticut, New Jersey, and even Wisconsin, Virginia, California - and Switzerland. Local musicians rehearse two times a week, while other members depend on travel, technology, and innovation to learn the music and choreography. The group makes about 60 appearances a year.

Locally, it has a long-running relationship with the Boston Pops, is often seen at Harborfest and Tanglewood, and will perform at the NHL’s Winter Classic at Fenway Park on New Year’s Day.

For some international performances such as the upcoming gig in Australia, the regular members are augmented by Volunteers alumni or musicians from other fife and drum groups. For Sydney, the MVC will have 30 fifers, a dozen drummers, a six-person honor guard, and a drum major, with another six to eight people working backstage.

Attention to detail is one of the hallmarks of the group. The hand-made wool uniforms are modeled after those worn by the Continental Army in 1779.

The hand-cast buttons cost $1 a pop, with jackets needing more than 40. It costs about $1,000 just for a uniform, including hat and powdered wig.

“They are molded to the wearer,’’ said Jim MacConduibh. “My uniform is the best-fitting piece of clothing I own.’’

Fifes are basically open-holed flutes, and their design allows music to be played in any key.

The repertoire combines original and historical music that spans seven centuries. The group works with three or four arrangers and has a music committee that has the final say on what’s in and what’s out.

“It has to pass what we call the ‘wig test,’ ’’ said Jim MacConduibh. “If it doesn’t sound right when played by someone wearing a wig, we don’t use it.’’

All of the Volunteers’ expenses will be picked up once they arrive in Australia, but the cost of shipping performers, instruments, and uniforms halfway around the world will be about $100,000.

Some members are making the trip a family vacation, since the group is expected to be in Australia for more than two weeks.

The trips are funded by appearance fees, fund-raising, and the sale of the Volunteers’ seven CDs, including their best-selling Christmas album, while each member will pay a modest fee.

The corps consumes most of the MacConduibhs’ waking hours when they’re not working.

“It is my life,’’ said Sarah MacConduibh. “At least for those of us in leadership roles, it’s pretty all-consuming. It’s more reasonable for the performers, but most of us who’ve been in for a long time measure the passage of years by our performance tours . . . ‘Oh, that was before the first Swiss tour, so that must have been 1996.’ ’’

For more information on the Middlesex County Volunteers, go to mcvfifesanddrums.org. Rich Fahey can be reached at faheywrite@yahoo.com.