Book offers advice, ideas on what do with the ashes afterward 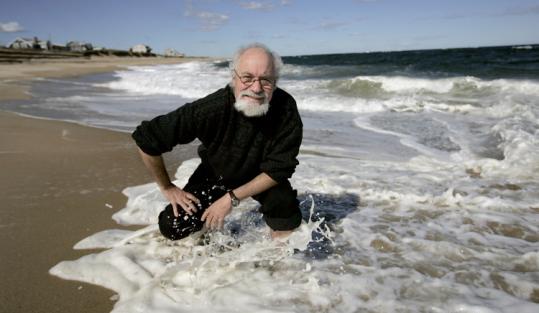 Jesse Kalfel at Plum Island. Of his book about cremation, he says, “It gets the conversation going.’’ (Cheryl Senter for The Boston Globe)
By Wendy Killeen Globe Correspondent / December 6, 2009

When Jesse Kalfel asked his then 93-year-old mother what she wanted to happen after she died, the option of cremation came up. She liked the idea but told him she didn’t want to be “cooped up in an urn.’’

That got Kalfel thinking. He began asking friends about their preferences and found many favored cremation, but also said they didn’t know what they wanted done with their ashes.

After several years of research, Kalfel, of West Newbury, has published “So You’re Cremated . . . Now What?’’ an informative and humorous guidebook that includes more than 100 “creative ways to scatter your ashes.’’

You can be blasted into space; become part of a manmade reef in the ocean; be mixed into the food at your funeral reception; become a refrigerator magnet; or be made into a diamond. The possibilities are, apparently, endless.

“It gets the conversation going,’’ Kalfel said of the book, which also includes information on the history of cremation, legal and religious issues, location suggestions, an appendix of websites, and a list of famous people who have been cremated.

“Forty percent of Americans are choosing cremation and it is going up every year,’’ said Kalfel, adding that the reasons are: it’s cheaper than traditional burial, better for the environment, avoids the space crunch in cemeteries, and can better reflect one’s personality.

“It adds meaning to that grand finale,’’ Kalfel said. “If you see yourself as the director of your life and this is the last act, then why not do something meaningful?’’

There are regulations about where you can be scattered. If at sea, it must be at least 3 miles out. If on private property, you need the owner’s permission.

“I thought there was a need for a book that gives the do’s and don’t’s,’’ said Kalfel, 60, who works in marketing and communications for a global software company.

When Jodie Hanson of West Newbury went with her family to Prince Edward Island to scatter her father-in-law’s ashes, she took Kalfel’s book along.

“My mother-in-law was having a hard time with the process and it helped,’’ Hanson said. “We passed the book around and got some humor out of it. I thought, ‘Why haven’t people written books like this before?’ ’’

Robin Lawson, a friend of Kalfel’s who works in marketing, said, “He did a great job balancing the seriousness and the humor. If you want to deal with the topic, you want it to be easy to digest and not be sitting there weeping.’’

And, she said, “It couldn’t be a more timely topic. You’ve got a massive baby boomer population with concerns about our parents, and we are the ones who need to think ahead.’’

In the spring, Kalfel is planning a “scatter your ashes’’ cruise in Newburyport, which would give people an opportunity to bring the remains of loved ones out to sea, or just learn more about the process.

Kalfel’s preferences for his own ashes are that they be packed into fireworks or be put into a time capsule that can be dug up in the future.

As for his mother, who is now 97, there are three choices - at a lake where the family spent summers, under a favorite tree in Kalfel’s backyard, and over her late husband’s grave.