Group urges readiness for a casino 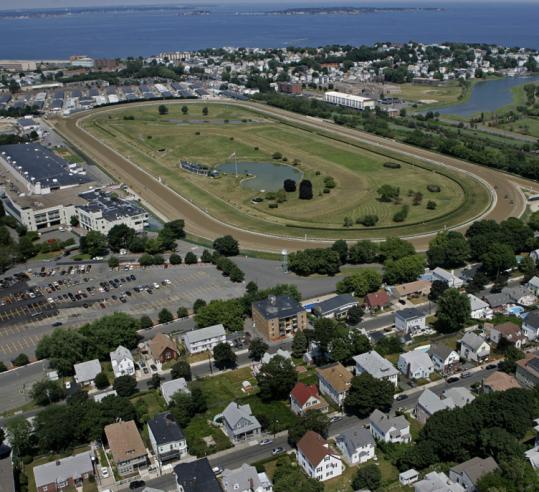 Suffolk Downs officials have made it clear they’d like to see expanded gambling at their site on the East Boston/Revere line, possibly through the creation of a resort-style casino. (David L. Ryan/Globe Staff/File 2007)
By John Laidler Globe Correspondent / November 22, 2009

As state lawmakers take a fresh look at expanded gambling in Massachusetts, a North Shore advocacy group is pressing to ensure the discussions include the needs of the region.

The North Shore Alliance for Economic Development is not taking a position on the various bills to extend legal gaming now before lawmakers, the group said in written testimony it submitted at a recent hearing of the Legislature’s economic development committee. But the alliance outlined steps it said would help the region take full advantage of the economic opportunities a casino could bring, and protect it from potential adverse impacts. The testimony refers specifically to the Suffolk Downs racetrack on the East Boston/Revere line as a potential casino location.

“We understand that Suffolk Downs is actively interested in developing a resort-style destination casino,’’ said Bill Luster, director of the alliance.

“We are agnostic about whether there should be gaming in the state,’’ he said. “We are jumping ahead and presuming that there is gaming and that there will be a resort-style destination at Suffolk Downs. We are then outlining the oppor tunities that would exist as well as the potential land impacts, both of which the state needs to address.’’

The alliance is an independent organization begun by Salem State College in 2007 to promote the North Shore as a region for economic development. The group, which leases space at the college, has about 125 participants from businesses, government, and nonprofits.

The group’s testimony pointed to regional transportation improvements it said would be needed if a casino opens at Suffolk Downs, steps it said could help preserve the easy access to Logan Airport and Boston the region values.

It recommended expediting several road projects: widening Route 1; improving the Route 1A corridor north of Bell Circle in Revere; and upgrading Route 60 between routes 1 and 1A. The group said the state also should continue - and potentially speed up - planning for the MBTA’s Blue Line extension to Lynn, and carry out enhancements to existing commuter rail service to the region.

The alliance proposed that a portion of the state’s future annual revenues from expanded gambling be placed in a fund that would assist North Shore municipalities in paying the design costs for such projects. Cities and towns are often required to pay for design, while construction is then funded by the state or federal governments.

To take advantage of the significant sums it said would be spent by a local casino on goods and services, the alliance proposed that each gaming facility be required to pay an employee who would help identify opportunities for local vendors to do business.

The alliance proposed that casino jobs be filled using the state’s One Stop Career Centers, which Luster said would help ensure they go to local people.

“They raised some great points, and we are going to evaluate them as we go forward,’’ said state Representative Brian Dempsey, a Haverhill Democrat who is House chairman of the economic development committee.

“I think there’s a desire to move forward with a gaming bill, and the complexity in doing that relates to some of the issues raised from this particular group,’’ he said. “We’re taking our time in drafting a bill, because we do want to consider all the issues that relate to infrastructure, existing businesses, and regional impacts.’’

The alliance’s requests are “legitimate things to demand if and when a casino comes to this area,’’ said Revere Mayor Thomas G. Ambrosino, an alliance board member who supports allowing casinos and having Suffolk Downs become a site. “Their position is certainly not inconsistent with anything I’ve been advocating.

“There are transportation improvements that will be essential to making Suffolk Downs an appropriate venue for a casino.’’

Chip Tuttle, chief operating officer for Suffolk Downs, confirmed that the track would be interested in operating a casino if the opportunity arises.

“We have been pretty consistent that we are interested in expanded gaming at the facility,’’ he said. “There is still some question in the Legislature as to what form of expanded gaming they might allow. A resort-style destination casino is generally found to produce more jobs and revenue for the jurisdictions they are in. . . . If that is the direction the Legislature heads in, we feel like Suffolk Downs is in a good spot to compete in that arena.’’

Tuttle said he had not seen the alliance’s testimony but was familiar with it and “we share their concerns.’’

“This region needs jobs as much or more than any region in the Commonwealth, and we certainly plan to hire locally if we are fortunate enough to be one of the sites selected for this type of development,’’ he said. “Our ownership has pledged to do business locally as much as is practical.’’

Suffolk Downs and Wonderland Greyhound Park, in Revere, reached a partnership agreement last year under which they plan to collaborate in seeking a casino at Suffolk Downs rather than competing for a license, according to Tuttle. He said Suffolk Downs, which has an option to purchase Wonderland under that agreement, envisions redeveloping the dog track for commercial or mixed uses in the event Suffolk Downs secures a casino license.

With a state ban on greyhound racing due to go into effect in January, Wonderland ended live cards Sept. 18, but continues to offer simulcasting.