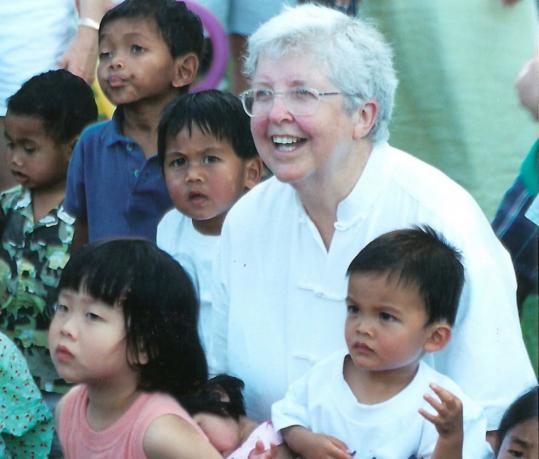 Dr. Nancy Hendrie of Concord with some of the children she has assisted through the Sharing Foundation.
By Cindy Cantrell Globe Staff / November 22, 2009

After more than 25 years in private pediatric practice in Concord and Carlisle, Dr. Nancy Hendrie of Concord left behind the restrictions of HMOs in 1994 in order to provide medical care to children adopted from China through Waltham-based Wide Horizons for Children. When regulations in China proved to be just as frustrating, however, she turned her focus to Cambodia.

As president of the Sharing Foundation, which she started in 1998, Hendrie works to meet the medical, physical, emotional, and educational needs of orphaned and other disadvantaged children in Cambodia. The organization has grown to serve 1,500 youngsters daily through an orphanage, five schools, and numerous other programs. Many of the children have HIV/AIDS, severe congenital problems, or cerebral palsy.

Area residents can contribute to her effort this weekend, when handmade gifts and school sewing projects produced in Cambodia will be available for sale from 10 a.m. to 2 p.m. Saturday at the Unitarian Universalist Church of Carlisle, and from 11 a.m. to 2 p.m. Sunday at the Hancock United Church of Christ in Lexington.

Now 77, Hendrie is looking to cut back her travels to Cambodia from four to three times a year. She is also working on a succession plan that would see her replaced as president by the time she turns 80.

“The moral is you’re never too old to get involved in helping people,’’ said Hendrie, who was the chief of pediatrics at Emerson Hospital in Concord and its first female medical staff president. “A small amount of work and moderate amount of money can change the world for these kids. It’s a privilege to be part of it.’’

For more information about Hendrie and her organization, go to www.sharingfoundation.org.

HIGH NOTE: Lexington resident Raviv Markovitz (performing above) recently took part in the 22d annual Thelonious Monk International Jazz Competition in Washington, D.C., as one of 15 young bassists worldwide chosen for the honor. Although he wasn’t named one of the top three at the finals, Markovitz said it was “very cool’’ to interact with so many respected jazz musicians.

Each year, the Monk competition highlights a particular instrument and awards scholarships and prizes. This year’s 15 finalists were from Washington, D.C., Wisconsin, Oklahoma, Connecticut, Hawaii, New York, Illinois, Australia, Peru, and the Netherlands, as well as Massachusetts.

For more information, go to www.monkinstitute.org.

SCIENCE STORIES UNTOLD: Lexington author Rick Beyer attributes his lifelong interest in science and history to his father, the late Robert T. Beyer, a physicist who loved reading about the Civil War. Beyer combines these passions in his latest book, “The Greatest Science Stories Never Told: 100 Tales of Invention and Discovery to Astonish, Bewilder, and Stupefy.’’

The fourth in Beyer’s “Greatest Stories Never Told’’ series, published by Harper Collins, the new book includes such tales as the origin of Teflon, Velcro, and the bobby pin; the refrigerator invented without toxic ammonia by a concerned Albert Einstein; the push-button phone developed by undertaker Almon Brown Strowger, who suspected a local switchboard operator of diverting business to a competitor; the work of William Marston, who invented both the lie detector and Wonder Woman; and how Charles Darwin was nearly prevented from embarking on the five-year voyage that led to his theory of evolution when the ship’s captain objected to his large nose.

“I love all of the eureka moments and stories of accidental discoveries,’’ said Beyer, who is also an award-winning documentary producer, adding that he hopes readers “will take away the idea that history and science are fun.’’

Beyer can be heard discussing his book tonight on the “Jordan Rich Show,’’ airing at 11 p.m. on WBZ-AM 1030. For more information, go to www.rickbeyer.net.

MATH PRIZE: Elizabeth Synge of Lexington won the $20,000 first-place award in the Advantage Testing Foundation Math Prize for Girls competition at New York University on Nov. 14. A junior at Boston University Academy, she was one of 237 high school girls nationwide who competed in algebra, geometry, trigonometry, combinatorics, and number theory. Synge, who has been participating in similar competitions since age 9, won a silver medal at the China Girls Mathematical Olympiad in August.

Cindy Cantrell can be reached at cantrell@ globe.com.