No work for the weary

Some of the state’s highest unemployment rates are found in area communities, where job seekers, career counselors hold out hope for stimulus to kick into gear 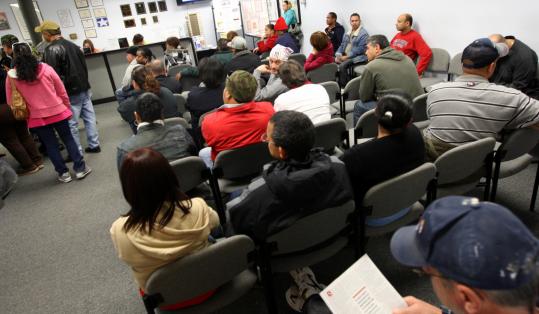 It’s 10 o’clock on a Monday morning and about 100 solemn-faced people crowd into a gray-walled waiting room in an old brick building hard by the railroad tracks in Lawrence. The group is nearly silent and the faces are glum and filled with tension. The room could serve as the epicenter for unemployment in Massachusetts. In Lawrence the rate has jumped to 18.2 percent, highest in the state.

“I’m afraid, and it’s getting scary. I don’t know when it’s going to end. I just feel like leaving the state,’’ says Delis Pizarro. The Lawrence woman says she has not worked for 18 months and is applying for an unemployment benefit extension at the ValleyWorks Career Center, which serves as an unemployment office and provides work counselors and case managers to the job seekers.

Like many at the center, Pizarro says she is getting desperate and wonders whether she’ll ever work again. At 39, she still owes $38,000 in college loans, but hasn’t been able to find any work in her field - medical admissions to hospitals or nursing homes. And she’s gone without health insurance since losing her job as an admissions counselor at a nursing home last year.

While Lawrence tops the state in unemployment, other former factory towns in the area, such as Lowell, Methuen, Lynn, Haverhill, Chelsea and Everett, have all seen unemployment jump dramatically in the last year. According to directors of state-run career centers, the hardest-hit sectors have been manufacturing and construction.

In Lawrence, where unemployment was 11.4 percent at this time last year, ValleyWorks Career Center director Arthur Chilingirian says the rate will continue to rise until new jobs are created through federal economic stimulus funds.

“I don’t see the end this year, but I’m hoping next year we’ll start coming out of this,’’ says Chilingirian. He has been through this before, during recessions in 1980, 1990 and 2002, but says this one is markedly different from prior downturns because, in the past, manufacturing jobs returned after the economy recovered. This time, he says, people will have to find other jobs. Big employers - such as , which employed 12,000 people in North Andover in 2002 but shut down in 2007, and Haverhill Paperboard, which let go of almost 200 people last year - are either closing or moving overseas.

State Senator Susan Tucker, who represents Lawrence, believes two large construction projects that have stalled because of the lack of federal and private funding could be the key to putting hundreds of workers back on the job. Tucker said several former factories have been slated to be renovated into housing, a project she estimated would cost “hundreds of millions’’ of dollars. The other building project in the works is a new campus for Northern Essex Community College in Lawrence.

“For Lawrence to recover, we need these construction jobs that have been in the books for years and years to move forward,’’ says Tucker.

Linda Rohrer, director of Career Source, which provides job counseling and retraining for the unemployed in Chelsea, Everett, and Revere, says that all sectors of the economy have lost jobs over the last year but construction has fallen off the most. “Construction has been way down for a year now. It’s been a constant and it seems to be a significant suffering sector,’’ she says.

Rohrer says one of the best ways to find a permanent job is to sign up with a temporary hiring agency, since they serve all sectors and fill positions from entry level to management. Like the ValleyWorks Career Center in Lawrence, Career Source offers individual job counseling, job fairs, employee forums, and workshops on resume writing, job interviewing, and networking.

State Senator Anthony Galluccio, whose district extends from his hometown of Cambridge to Chelsea, Everett and Revere, is stepping up his efforts to help people find work. In January, he’s planning a job fair in Revere, and he’s also lobbying to bring new manufacturing plants to his communities.

“It’s not going to be the manufacturing that my grandmother once knew, like the candy factories and steel factories,’’ says Galluccio. “What we need to do is look at the existing industries, such as medical devices and biotech. We really need to home in on these types of manufacturing jobs.’’

Early last week, Christian Miller left his Amesbury town house and drove to the career center in Lawrence for a networking session on “How to Work a Room.’’ Inside the large meeting room at the ValleyWorks center, 40 people listened to tips from workshop coordination Cindy Key. As they talked about confidently approaching people, Miller took notes.

During a break, Miller equated finding a job to full-time work. Four months ago, he was laid off from his customer service and sales job at a Framingham stereo company. Since then, he spends much of his day on the computer, scanning job postings and shooting off resumes with the hope some future employer will call. At least four days a week he also attends networking events, such as job fairs, informal gatherings for the unemployed, headhunter meetings, and workshops at the Lawrence job center.

Miller says it’s easy to get depressed in this market - with thousands sometimes vying for the same job - but he believes the more effort he puts into the job search, the sooner he’ll find work.

While he retools his resume for every job he applies for, Miller says, he worries about the overall economic recovery. “There’s a lot of people ‘dumbing down’ their resume because they’re looking for anything,’’ says Miller, who has a bachelor’s degree from Boston University.

The strategy might help somebody land an entry-level clerical or retail position, he says, but there’s no guarantee that they’ll be able to pay their bills.