Coaching to save a life 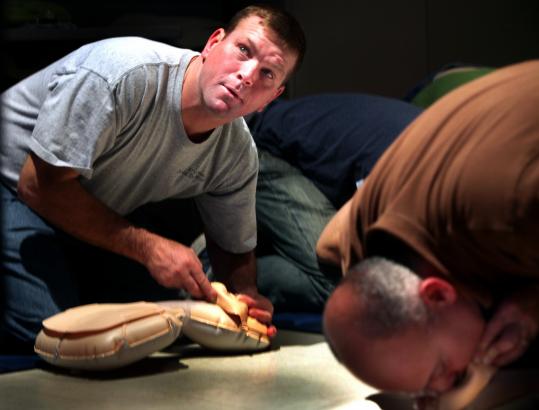 After the last lacrosse game of the season, Betsy Rigby watched at a Natick field while her 9-year-old son and his teammates celebrated with an awards ceremony and snacks.

In an instant, the mood shattered: One of the boys was choking.

As his father unsuccessfully administered the Heimlich maneuver, people stood paralyzed in horror while the boy struggled to breathe.

“The boy started to go blue,’’ Rigby recalled. “The mother started to scream ‘Save him!’ . . . I thought we were watching someone die.’’

The boy survived - the airway obstruction was an ice pop that melted before paramedics arrived - but after ruminating over what could have happened that June evening, Rigby learned something that floored her: Most youth sports coaches are not required to know first aid or cardiopulmonary resuscitation.

In the months since, Rigby has enlisted the Natick Fire Department on a mission to offer emergency training to every coach in town.

At last count, she said, 82 have learned the basics of first aid and CPR as Rigby reaches out to organizations for sports rang ing from basketball to hockey.

“I drop them off with a water bottle and a snack, and expect to pick them up and they’ll be OK,’’ Rigby said of her three children, who play on a total of 10 teams. “I couldn’t help but think this was as close as any of us had come to a real tragedy. . . . I thought that we shouldn’t be in that position again.’’

Though the association that oversees high school sports requires coaches to undergo first-aid training, regulations are not the norm among the patchwork of youth leagues and teams serving hundreds of thousands of children across the state.

In some communities, however, fire departments and hospitals are reaching out to train youth coaches. And legislation now on Beacon Hill would require all high school coaches to be certified in CPR and the use of an automatic external defibrillator.

In Fall River, cardiac-disease survivor and former Miss Massachusetts Michaela Gagne has overseen the training of all youth soccer coaches and secured defibrillators for all of the city’s fields. Dr. Ken Lawson, Signature Healthcare Brockton Hospital’s chief of emergency medicine, said that the “youth athletic first responder’’ program he started two years ago has trained 500 coaches in CPR, defibrillators, and sports-related emergencies.

“It’s so incredibly easy that it’s a sin we don’t have it in every single town for every single sports program,’’ said Lawson. “The kids that collapse while doing sports . . . you always wonder, could there have been a different outcome if somebody knew what to do?’’

Within days of the near-tragedy she witnessed, Rigby sought to make changes in Natick.

Her youth sports connections led her to the local Fire Department, which has a program funded by the MetroWest Community Healthcare Foundation to teach the basics of CPR, defibrillator use, and first aid to the town’s residents and employees.

Lieutenant Mike Aries, who heads the Natick program, thought Rigby’s idea of offering training to every youth sports coach in town was great.

“I run into this wonderful woman, Betsy, and she comes to me and says, ‘Mike, I’ve recognized this problem,’ ’’ said Aries.

The Ashland Fire Department has been offering free training for all interested residents, based on the same American Heart Association kits that Natick uses.

“Anybody who wants to learn the ‘family and friends CPR,’ I’m willing,’’ said Lieutenant David Iarussi, who runs the training. “It’s just a matter of getting people together to take the class.’’

More than 30 million children ages 14 and under play organized sports, according to the American Academy of Pediatrics. And 22 percent of the 1.4 million emergency room visits by children ages 5 to 17 in 2006 were the result of sports injuries, according to a report released this year by the Agency for Healthcare Research and Quality, which analyzed hospital data from 25 states.

While there’s been a movement in youth sports toward prevention and early recognition of injuries in players, most organizations have been reluctant to require training for coaches.

“We have taken the position that we will provide advice, access to resources, and possibly some training . . . at the coaches clinic we put on, but ultimately each town is responsible for how they approach this issue,’’ said Stuart Brown, president of the Massachusetts Bay Youth Lacrosse League. “We feel it is not viable for us to mandate training.’’

Massachusetts Hockey, which has jurisdiction over the state’s youth teams, has been active for years in preventing head and spinal injuries through its game rules and “Heads Up, Don’t Duck!’’ awareness slogan.

It also teaches coaches extensively about concussion awareness, but does not require CPR training.

Nor does the Massachusetts Youth Soccer Association require first aid or CPR training.

“We try to be as friendly as possible’’ to volunteers, said executive director Skip Gorman, considering the time already put in by its coaches.

Little League Baseball also has no training requirements for coaches, although they are briefed on how to deal with situations.

“It is recommended that each coach-manager have CPR and/or first aid but it is not required,’’ said Little League’s national director of media relations, Steve Barr, in a statement. “Each league has a safety plan and a safety officer.’’

For the past two years, Pop Warner football has required that head coaches and at least one assistant on each roster be certified in CPR.

“You want your coaches to be as well-prepared throughout the training as possible,’’ said Joshua Pruce, a spokesman for the national Pop Warner organization.

All high school sports in the state are under the umbrella of the Massachusetts Interscholastic Athletic Association, which requires coaches to take a training course that includes first-aid education, said spokesman Paul Wetzel.

“In the out-of-school sports, it’s a whole different ballgame,’’ said Wetzel. But he noted considerable hurdles to widespread training for youth coaches. “From time to time there have been movements to have available defibrillators and coaches trained in them. First of all it costs money. . . . Then theoretically, the person who needs [help] is going to be in the stands. There’s liability . . . some states consider it a medical procedure.’’

One of the Natick coaches responding to Rigby’s call for training is Sharon Kaliouby, a girls’ soccer coach. She was among 16 hockey and soccer coaches who gathered on a recent Monday night in Natick’s downtown fire station for the two-hour CPR and first-aid course.

Firefighters Daniel Hartwell and Ron Downing - both coaches themselves - led the training, which they interspersed with tips covering situations that might come up in various sports.

“I feel a hundred times better,’’ Kaliouby said after learning the basics of chest compressions, defibrillators, and first aid. She said it was Rigby’s heartfelt retelling of the choking incident that opened her eyes. “It wasn’t until someone came with a personal story that you could picture yourself in that situation.’’

Since the choking incident, Rigby has been in regular contact with the boy’s mother, Dori Ross. Ross said she didn’t know Rigby well before the June lacrosse game, but that the two have bonded through Rigby’s efforts.

She said that although her son has moved on from the incident, it still bothers her.

“I remember it vividly, I remember his face,’’ said Ross.

But Rigby’s efforts have lessened the pain.

“I think it helps that Betsy has done all of this,’’ she said. “I don’t need to remember it as much because people are safer.’’

Megan McKee can be reached at megan.mckee@gmail.com.