THIS STORY HAS BEEN FORMATTED FOR EASY PRINTING
Belmont

A plea for voluntary payments 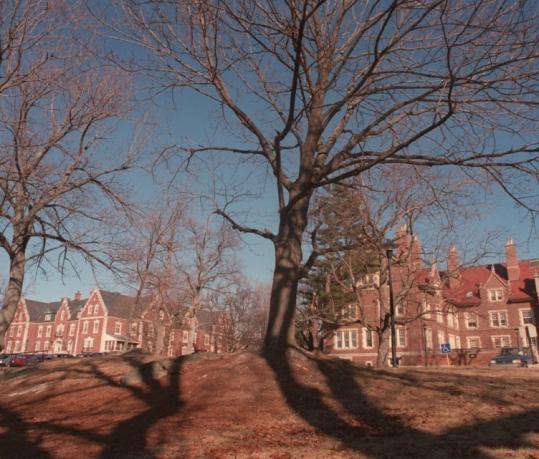 A view of the McLean Hospital campus, which Belmont officials are targeting for a $203,000 voluntary payment in lieu of taxes. (Globe Staff/File 1998)
By Jennifer Fenn Lefferts Globe Correspondent / October 11, 2009

Belmont officials are passing the hat to all of the tax-exempt institutions, including private schools, churches, and hospitals, in town.

The Board of Assessors is turning to the entities, which under state law are not required to pay local property taxes, in an effort to raise more revenue for the cash-strapped municipality. The board has developed a voluntary payment-in-lieu-of-taxes, or PILOT, program, and hopes the 37 nonprofit organizations on its mailing list will sign up.

“As the cost of government continues to escalate, everyone should share in the cost of these services,’’ said board chairman Charles Laverty. “We feel they have a moral obligation to contribute.’’

In drafting its program, the town looked at other communities that have PILOT agreements in place, said Richard Simmons, Belmont’s assessing administrator.

The review by the Board of Assessors took note of Newton’s arrangement with just two institutions, with the focus on Boston College, as well as other communities, such as Boston, Cambridge, and Watertown, that have had success seeking payments from several tax-exempt entities.

In 2002, Watertown established a PILOT arrangement with Harvard University. Today, it has nine agreements that bring in about $2 million a year, according to Daniel Loughlin, the town assessor.

Loughlin said Watertown has not asked all tax-exempt groups for payments, but instead has tried to work out a deal when a piece of property changes hands. But he said a townwide program is something Watertown should consider.

“I do feel strongly that all property owners should contribute something,’’ Loughlin said. “It’s an acknowledgement that, yes, we are a part of this community, and we do use police and fire services.’’

Cambridge started its PILOT program in 1973 and collected $1 million the first year, with Harvard among the participants. Last year, the program had 25 tax-exempt institutions contributing $5 million.

Laverty, who helped establish the Cambridge program three decades ago, said Belmont has nothing to lose by asking.

In Belmont, 44 percent of the town’s 4.71 square miles is nontaxable property. Some of the land is owned by tax-exempt organizations, while the rest is public areas, such as roads, sidewalks, and parks.

The Board of Assessors plans to meet with some of the largest tax-exempt property owners in the next few weeks, and send out letters to all 37 institutions by the beginning of next month, said Simmons.

The town is asking the organizations to pay 4 cents per square foot of land, which represents about 20 percent of what a tax-paying property owner would contribute toward municipal operations, officials said. The 20 percent figure is based on the share of the town budget taken up by police, fire, and public works, which are the services most used by the tax-exempt institutions.

“This is what we feel the charitable organizations should pay into the town to cover municipal services,’’ Simmons said.

“We never want people to think we’re forcing them to pay. We’re looking to their generous side to help the community out in this time of need.’’

So far, reaction to the voluntary plan has been mixed.

The Lions Club of Belmont, which owns the smallest tax-exempt parcel, has agreed to pay its share plus some. McLean Hospital, the largest property owner, is waiting for more information from the town, and the Roman Catholic Archdiocese of Boston said it will not participate.

Steven Rizzuto, president of the Lions Club, said the group decided to contribute $500 instead of the requested $174.

“We feel the services offered to us are well worth that,’’ Rizzuto said. “We’re trying to make a point by offering more than what we were required.’’

Spokesman Terrence Donilon said the Boston Archdiocese understands the financial pressures facing cities and towns, but it is also struggling to meet its own financial obligations.

“The Roman Catholic Archdiocese of Boston does not make PILOT payments to any city or town,’’ Donilon said in a statement. “To be faced with such an additional financial burden would materially impede the church and its ministries in meeting the most basic needs of the less fortunate, many of whom are experiencing job, housing, and health insurance loss as a result of the recession.’’

The town’s request would translate to a payment of $10,444 for the archdiocese’s local properties, which include St. Luke’s Church, its rectory and school on Lexington Street, and St. Joseph’s Church and rectory at Common and Waverley streets.

The town is seeking the most from McLean Hospital - about $203,000, based on the square footage of its Mill Street campus.

Adriana Bobinchock, a spokeswoman for McLean Hospital, said officials are waiting to receive a formal letter from the town before deciding on their response.

McLean Hospital had been making payments in lieu of taxes through last fiscal year, when the agreement expired. Simmons said the town notified McLean last month that the arrangement had ended and that it would be requesting payments under a new PILOT agreement.

The town has agreements with three public tax-exemptentities: The Belmont Munici-pal Light Department pays $650,000; the Waverly Woods affordable-housing complex is slated to pay $22,000 once it reaches full occupancy; and the City of Cambridge pays $4,839 for the Payson Park Water Reservoir.