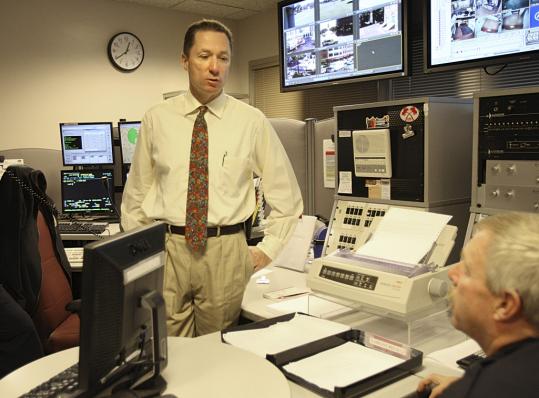 Incoming Salem Police Chief Paul F. Tucker: “I always liked the idea of what police officers did and what they stood for. It made an impression on me at an early age.’’ (Suzanne Kreiter/Globe Staff)
By John Laidler Globe Correspondent / October 1, 2009

Growing up in Salem, Paul F. Tucker dreamed of one day becoming a police officer for the city.

“I always liked the idea of what police officers did and what they stood for. It made an impression on me at an early age,’’ he said.

Tucker could hardly have imagined how far his pursuit of that dream would take him. Tucker became a Salem police officer in 1983, rose through the ranks, and today he will take his oath as the city’s police chief.

The one-time Salem High School track star was selected by Mayor Kimberley L. Driscoll from among four Salem police captains she considered for the post.

“There are a lot of different feelings at the same time,’’ said Tucker, who turns 51 today, reflecting on his selection to head the 88-officer department. “Obviously, a feeling of relief that I got the job. A feeling of excitement personally and professionally. And there is a feeling of eagerness and readiness to get to work. All those things at once.’’

The appointment of Tucker, who has been chief of detectives since 1992 and executive officer since 2005, marks a notable changing of the guard for the department. His predecessor, Robert M. St. Pierre, retired Sept. 11 after 25 years as chief. But by all indications, the transition has been seamless, a reflection of the close working relationship the two enjoyed over the years.

“He’s been my boss and he’s been my mentor,’’ Tucker said of St. Pierre, noting their similar career paths - St. Pierre also served as chief of detectives before being named police chief.

Tucker said he inherits a strong department, a testament to St. Pierre’s leadership.

“He’s going to be remembered as the person that moved us into the new age by getting the building we are in today, which is probably the finest police station in New England,’’ he said, referring to the $6 million Margin Street facility the city opened in 1992.

He said St. Pierre would also be known as “a man who built a real esprit de corps in this department. He did it with a lot of hard work and tough decisions.’’

St. Pierre, for his part, has high praise for his soon-to-be successor, maintaining that there is “no person on the North Shore, or actually the state, more qualified to take over the helm of the Salem Police Department.’’

“Not only has he earned the job, he is eminently qualified for it - based on his experience, based on his education, and more important, based on his character,’’ St. Pierre said of Tucker, “He’s a real cop. He loves the job. He became a police officer for the right reasons. He’s probably the most active police officer in the history of the Salem Police Department.’’

Tucker said he hopes to build on the legacy of St. Pierre “but also to look ahead to stay current’’ in areas such as technology and improving efficiency. “There are a lot of resources out there. Part of my job is to make sure we get those resources for the department to keep us as good and effective as we are,’’ said Tucker, a Salem resident who with his wife, Ann, has three children.

Tucker said that like other communities, Salem has had to scale back in some areas due to budget constraints.

“Like a lot of police departments, what we’ve had to do is go back to basics and do them well,’’ he said. “But there will be a time when we will be able to build back up.’’

Tucker was born and raised in Salem, son of the late Daniel Tucker, an air traffic controller at Logan Airport, and Sheila Tucker. On the track team at Salem High School, from which he graduated in 1976, he was conference champion in the half mile during the spring of his senior year.

During his years on the force, Tucker picked up bachelor’s and master’s degrees in criminal justice, and a law degree from Massachusetts School of Law. He has taught criminal justice classes at three local colleges.

Deputy Peabody Police Chief Scott Carriere, who worked closely with Tucker when the two were assigned to the Essex County Drug Task Force in the 1980s, calls him an ideal pick to lead the Salem Police Department.

“When it comes to men of his caliber, they are few and far between,’’ Carriere said, calling Tucker “one of my heroes. He taught me probably everything I knew at the time about being a detective,’’ referring to their days on the drug task force. “He’s just relentless when it comes to investigations.’’

Carriere also praised Tucker for his excellent police instincts, noting the numerous occasions that Tucker helped extricate him from dicey situations when Carriere was working undercover for the task force and Tucker was his handler.

“He would be the one banging through the door to get me’’ when he ran into trouble, Carriere said.