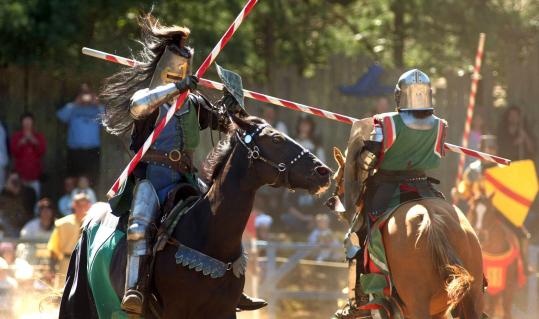 CARVER - It’s always been a difficult job to rule a medieval kingdom.

Back then it was starving peasants demanding bread; today it’s 21st-century customers complaining about the prices and selection offered by royal food vendors. And there always seems to be a menacing rival kingdom to the south.

What does King Richard Faire’s founder, Bonnie Shapiro, now in her 28th season on the throne, plan to do about it?

“Put on a great show and try as hard as we can to show people a good time and make them laugh,’’ said the head of New England’s premiere Renaissance festival. “Entertaining people is my greatest joy in the world.’’

This fair season, though, has been troubled by recession, rain, discontent among suburban vendors and performers, and the growing popularity of the upstart Connecticut Renaissance Festival.

Many members of the small, tight-knit Massachusetts “Rennie’’ community, like Littleton-based costumer Dina Flockhart of Cloak & Dagger Creations, say they find King Richard’s work rules too restrictive - the Carver attraction requires its tenants and performers to sign an exclusive contract, forbidding work with other New England Renaissance-themed festivals and fairs.

To make a living, Flockhart said, she needs the option of selling her traditional wool cloaks, handmade medieval circlet headwear, cloak clasps, men’s pirate shirts, and other custom clothes in Connecticut, as well as at the upcoming Winslow Shire Renaissance Faire in Norton and the 2010 Maine Renaissance Faire in Augusta, opportunities she said would be verboten if she were under contract to King Richard’s.

“They want a vendor to be only available through them, and as a business owner that is too limiting,’’ said Flockhart, who also crafts custom Star Trek and Star Wars costumes. She said she also prefers the alcohol-free atmosphere at other festivals, in contrast to the sometimes “rowdy’’ scene in Carver. “As a parent, it’s better, and it makes for more civil behavior,’’ she said.

Shapiro said she understands the objections, but keeps the restrictive policy so that “our visitors will experience unique talent when they come here.’’ She said she is on track to attract between 100,000 and 150,000 visitors during this year’s 18-day festival, held weekends through Oct. 25.

Last weekend, the skies were bright blue, the air crisp, and visitors - many in medieval garb - gnawed on giant turkey legs and King’s Roasted Nuts, and washed down the faire food with coffye, honey mead, and ale. A visit to King Richard’s is not inexpensive. Most food and drinks cost $6 to $8, and many of the rides and games - such as knife throwing for adults, and archery for children - cost another $2 to $3. Many of the wandering costumed musical performers also carry tip jars.

This is in addition to $26 for an adult ticket, and $15 for children ages 5 to 11. Patrons may not bring in their own food or drink, or leave the grounds to return later in the day.

Jonathan Kamens got into a well-publicized spat after he and his family were not allowed to bring a homemade kosher lunch into King Richard’s during a 2005 visit.

Kamens, a Cambridge software engineer who publishes a personal blog about customer service, said it was his first experience with a tourist attraction that failed to make an accommodation for observant Jews. His family had to eat their kosher food on the ground next to the entrance gate, he said.

“The thing that King Richard’s has was really big-name acts and prominent performers,’’ Kamens said in a telephone interview last week. “But I was disappointed with how we were treated, compared to the other [tourist] institutions in this area. If they had treated my family nicely, we would have gone back year after year.’’

But Shapiro, who is also Jewish, said her festival’s actions were designed to be fair to all visitors, regardless of religious beliefs. She described King Richard’s - named after her late husband, and faire cofounder, Richard Shapiro - as a theme-park experience designed for total immersion. The price, she said, reflects the cost of employing professional performers, serving quality food, and maintaining a period-style 15th-century medieval village on the 80-acre wooded property near Edaville USA.

The Shapiros, veteran musical theater performers and producers, helped establish Renaissance Faires in Chicago and Milwaukee in the 1970s, and decided to expand to the East Coast, choosing Carver in 1981.

Bonnie Shapiro described how she hired the young, then-unknown comedian Jim Belushi to be the costumed faire “king’’ in Chicago one year. But Belushi quit the job after a single weekend, saying the nonstop demands of working the crowd and staying in character were “too hard,’’ Shapiro recalled. And her daughter, Samantha Harris, worked at King Richard’s in her younger years, before going on to a career in Hollywood as a co-host of “Dancing With the Stars,’’ she said.

This Saturday marks the season kickoff of Connecticut Renaissance Faire, which hopes to attract 30,000 people to the Hebron Lions Fairgrounds during its own four-weekend season.

Organizers of the smaller festival have been careful to avoid some of the criticism that has dogged King Richard’s Faire; its ticket prices are lower - $16 for adults, $8 for children aged 5 to 11 - outside food is allowed, and re-entry is permitted with a hand stamp, said cofounder Brian Harvard.

The Hebron festival began with 1,000 Renaissance enthusiasts at a one-day festival in a motel parking lot in 1999, and has been growing ever since. Harvard, 40, said he and co-organizer Eric Tetreault trace their love for Renaissance festivals back to their own teenage visits to King Richard’s.

“We always went to Carver, and we dressed up. We were always passionate about this world, and we thought, let’s try to make our own community. We have a staff and volunteers who pour their heart and soul into it,’’ said Harvard, who also works full time as a pharmacy technician in Springfield, Mass.

Their vendors and performers can work for whomever else they please, he said. “They’re trying to make a living and so are we,’’ he said.

Harvard is diplomatic about the defection of two of King Richard’s major comedy acts to his own fair several years ago - Smee & Blogg, “The Singing Executioners,’’ as well as The Pope and Cardinal, a comedy act by North Shore brothers Paul and David Stickney. Like King Richard’s, the Hebron festival also features jousting, puppetry, duels, wandering troubadours, and a cleavage contest for women in low-cut bodices.

“I love the audience in Connecticut - I feel like we are in something up-and-coming,’’ said Paul Stickney of Saugus, who said he and his brother left King Richard’s in 2002 after a decade performing there, because they did not want to sign a two-year-long exclusive contract with Shapiro.

Harvard said he and his partners aren’t trying to sabotage the granddaddy of regional Renaissance festivals. “We do the faire because we love it. We don’t do it to compete with King Richard’s or smack them in the face,’’ he said.

Shapiro also maintains that the realm is big enough for two Renaissance shows.

“It’s always a compliment when someone copies you. We’re the biggest show in the region, and we hope to stay that way because we offer shows and performances you can’t see anywhere else.’’

‘They [King Richard’s Faire] want a vendor to be only available through them, and as a business owner that is too limiting.’