As education budgets shrink, many say state could do better for gifted children 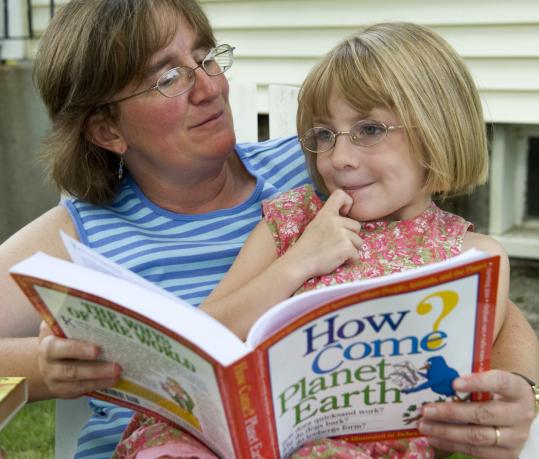 Maynard resident Linde Ghere with her daughter, Aurora, 6, a first-grader who reads at a fifth-grade level. (Jon Chase for The Boston Globe)
By Taryn Plumb Globe Correspondent / September 20, 2009

At age 3, Aurora Ghere began to read. Now 6, she delves into books that are usually fifth-grade fare, recently finishing “The Call of the Wild’’ and “The Adventures of Huckleberry Finn.’’

When the Gheres lived in Maryland, a screening in her school district identified Aurora as a gifted child.

But Green Meadow School in Maynard, where Aurora is in first grade, lacks programs geared toward gifted children. Though administrators have been supportive of Aurora’s needs, her mother thinks schools in her town and elsewhere should do more.

“We could care less if our children got into Harvard or MIT,’’ said Ghere. “We just want them to love school. School should be a joy.’’

Three months ago, Ghere helped start a Maynard-based group of parents and educators to address what they describe as a dearth of services for gifted students. Similar groups have met for years in Framingham and Natick.

The parents contend gifted children are a population with distinct needs, just like children in special education. But with money scarce even for core programs, services for gifted children can be seen as an expendable luxury. And some districts don’t agree with the concept in the first place.

“Whenever we’re in such dire fiscal times, all kinds of small programs tend to get cut,’’ said Nora Todd, policy specialist with the Massachusetts Teachers Association, which supports identifying the needs of students and providing proper instruction for them. “Programs such as this are vulnerable.’’

Advocates contend that programs for gifted children receive particularly low priority in Massachusetts: According to the Massachusetts Association for Gifted Education, the state ranks 50th in its aid for such programs.

The state is one of just seven in the country that does not require or fund gifted education. Furthermore, there is no shared definition of “gifted’’ in Massachusetts, said Sylvia Jordan, a principal in Newbury and chairwoman of a council that advises the Board of Elementary and Secondary Education on the subject.

Just a few dozen school districts, including Brookline and Framingham, have established programs on their own, while Barnstable, East Longmeadow and Newbury have set up resource and support centers.

Brookline’s Enrichment and Challenge Support Program doesn’t formally identify students for a separate gifted program, but it supports classroom teachers in extending and enriching the curriculum for academically advanced pupils.

Until this year, there had been some state support for gifted programs. After increasing from $99,999 in fiscal year 2005 to $765,000 in the year that ended June 30, a grant effort that funded gifted programs was zeroed out for the current fiscal year, according to Jonathan Considine, spokesman for the state’s Department of Elementary and Secondary Education.

Meanwhile, federal funding is just as precarious, with $7.5 million expected for a nationwide program but not yet ensured.

As a result, the staffing for Framingham’s gifted and talented program has been cut in half, from 9 to 4.5 positions, according to Diane Modest, director of the 29-year-old initiative. Although its staff and some materials are still being funded, services will be pared significantly this year due to the expected loss of $120,000 in state aid.

The program’s teachers, who travel from school to school, will have less time to work individually or in classrooms with the district’s 600 students identified as gifted, Modest said.

Considering Massachusetts’ reputation for educational excellence, she said, she finds the lack of funding for gifted programs surprising. But not all school districts agree that singling out gifted children is the right choice.

In the Newton schools, it’s about “differentiating instruction’’ for all students, “not just for those who need additional support,’’ according to the district’s acting superintendent, V. James Marini. He said he is not aware of any recent discussions to implement such programs in the district. “A separate strand for gifted and talented has not been part of Newton’s experience,’’ he said.

However, because the system has some “unbelievably bright kids,’’ Marini said, teachers provide additional materials for certain students with the help of curriculum coordinators.

All told, it’s “not a budgetary issue so much as a philosophical matter. Budgets are restricted. We would be looking to increase productivity in terms of trying to find ways to be efficient and develop a rigorous, challenging program for all kids,’’ he said.

In some communities, though, parents are looking for more. Ghere and a handful of other parents started Maynard Parents for Advanced/Accelerated Learning Strategies last spring, and it now draws more than 40 area parents and educators to its monthly meetings, she said. Their first task is to assemble a handout for teachers on identifying gifted children, addressing potential behavior problems, and meeting their needs.

“Treading water, or in some cases regressing, should never be acceptable,’’ Ghere said.

The solution doesn’t necessarily mean another line item on the budget, proponents argue. They say options can include additional training for teachers, allowing students to attend a few classes in higher grades without skipping their level, placing them in pull-out programs or specialized classes, and “compacting’’ curriculum to quicken the pace of the learning process. And Advanced Placement courses could be offered to younger students.

Ghere acknowledges that Maynard school officials have been supportive of her organization’s goals. And Superintendent Mark Masterson said the district began looking at the issue even before the group was formed.

Citing the difficult economy, it’s “hardly a time to initiate new programs,’’ Masterson said, but the district is in the “process of having a conversation’’ about identifying gifted students, and setting goals to meet their needs. “Philosophically, we don’t have any problem with that; in fact, we support it.’’

In an ideal world, Masterson said, a teacher in each school would be designated to develop alternatives and assist colleagues in helping gifted and talented children. But, he said, that’s “not on the radar screen in terms of where we are right now.’’

Even so, Ghere says her daughter isn’t being stifled. Aurora is continuing to progress, and is enjoying school.

She got lucky last year with her kindergarten teacher, who pushed her to work harder and “didn’t let her just be lazy,’’ Ghere said. This year, her first-grade teacher has been giving her extra assignments.

Outside of school, her parents try to keep her challenged, taking her on nature walks to augment what she’s studying in class. Aurora also has taken Spanish and German classes, as well as dance.

“We’re always looking for ways to go beyond homework,’’ Ghere said, aiming to “keep that spark for learning alive.’’