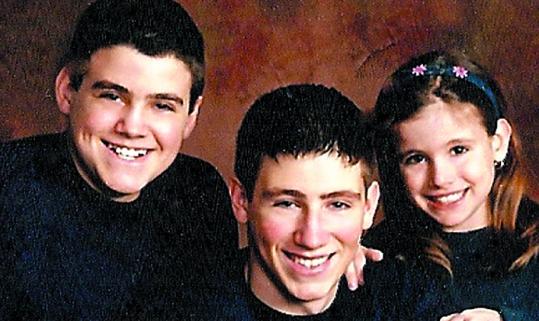 They had a normal, typical life. First his. Then hers. Then theirs together. They dated. They fell in love. They got married.

Five years later, they had a 9-pound baby boy.

Twelve months and 11 days after Mark was born, Chuck and Maureen Palermo welcomed their second child, another 9-pound boy. They named him Daniel.

Life was crazy and busy and noisy and no one slept very much, but life back then was good.

Daniel was 6 months old and being treated for a hernia when the earth first trembled, when a doctor said the words “failure to thrive,” then “cystic fibrosis.” “We had no idea what cystic fibrosis was,” Maureen said last week, sitting at her kitchen table in Medfield, waiting for a phone call from a Cleveland hospital, waiting for a miracle.

The Palermos know everything about CF now. They know that it inhibits breathing and digestion, that it causes inflammation and infections, and that it is slow to kill but never lets up on its mission. But then they were new to this world of doctors and hospitals and medical interventions and they thought -- they believed -- that drugs and therapies and innovative procedures could derail CF and render it chronic but not fatal.

The same day they found out that Daniel had the disease, the doctors said that Mark needed to be tested, too. “He was a big kid, 30 pounds at one year. I thought he couldn’t have it. There was no failure to thrive with him.”

But his test came back positive.

In the beginning, CF didn’t seem so bad. The boys had a disease but they managed it. They had regular checkups. They took pills when they ate. And that was it. There were no nebulizers and no therapies. “They seemed healthy,” Maureen said.

When she got pregnant with their third child, the Palermos were hopeful. CF is a genetic disease. Both parents must carry the gene for a child to inherit it, and even then there is only a 25 percent risk. They had two children with CF. The odds, they thought, were on their side. But Lisa, like her brothers, was born with the disease.

For a long time, everyone’s CF remained manageable. As the children grew older, they took more meds at home and there were more therapies.

“But it was really just a routine. It was our ‘normal.’ CF didn’t seem to affect much of anything they wanted to do,” Maureen said.

Mark threw the javelin, ran track, and played football. Dan did sports, too. “He played baseball up to 8th grade.” Then he got involved in theater. “Senior year he did all three productions. He looked great. He even grew a beard for ‘Fiddler.’ ” And Lisa danced, ballet and tap and her real love, Irish step dancing.

Dan died first, in August 2007, just two months after his high school graduation. “He got sick in May. He missed his senior class night and his senior cruise. But he came home for graduation. He made it through the ceremony and pictures. And then we took him back to the hospital. At the end of July he came out of the hospital and seemed fine. We all went to Savannah. I don’t think any of us realized where this was headed.”

Lisa began her spiral downward in February 2008. “Last year she was in the hospital a lot.” She’d been approved for a double lung transplant and when the Palermos were told last October that lungs had been found for her, they breathed a small sigh of relief. But then a blood test showed that Lisa had an infection and couldn’t have the transplant. The next day, the 16-year-old died.

Mark, 22, the Palermos’ firstborn, continues to fight the same disease that killed his siblings. In the last three months, he’s lost his hearing, a result of medication he’s on. Still, he and his parents remain strong as they wait for word that a donor has been found for a lung transplant.

“When we get the call, we leave for Cleveland,” Maureen said. Mark was at Children’s Hospital in Boston the night I was at his house. The phone rang twice, but neither was from the Cleveland hospital.

After Dan died, the Palermos established a scholarship at Medfield High School to be given every year to a graduating senior who exemplifies the courage and determination and hope that Dan and his siblings have all personified.

Next Saturday night, on what would have been Dan’s 21st birthday, Jimmy Tingle will entertain at the school to raise funds for this scholarship. Tickets and further information are available at www.palermoscholarship.ericsite.com.