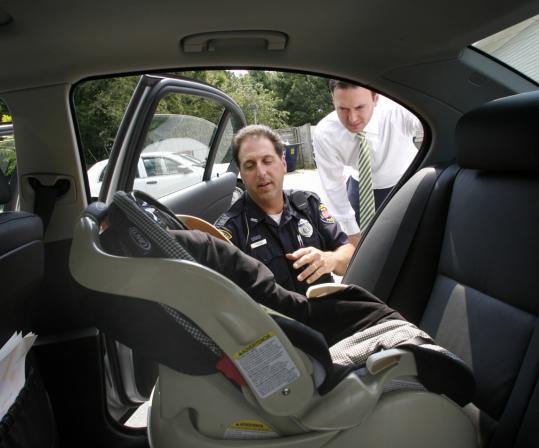 ARLINGTON - Ramya Kollipara was nearly eight months pregnant with her second child, and she had everything ready for the new baby, with one exception: the car seat that was legally required to transport her infant home from the hospital.

As her due date approached, Kollipara could not find anyone to inspect the car seat to make sure it was fastened properly. She contacted five local police departments, home to most of the state’s certified inspectors, but none could help her.

“I was getting a little nervous I wouldn’t be able to get the car seat inspected,’’ she said.

Finally, a few weeks ago, just before her due date, she snagged an appointment at Children’s Hospital Boston, where technicians inspected the seat. Although she was pleased with the service, it was inconvenient: She had to leave her job in Waltham in the middle of the day to drive into Boston.

One of the rituals of modern parenthood, first carried out by nervous parents-to-be and periodically reenacted as the children grow bigger, is struggling to follow the complex instructions and diagrams to get car seats safety attached. The risks of putting the seat in wrong are so frightening to many parents that they often rely on trained technicians to adjust, and even install, the seats. Police departments have traditionally offered the free service. But as local budgets tighten, some parents, like Kollipara, have struggled to find help.

Police in Cambridge, which once installed car seats for anyone who scheduled an appointment, limited their clients to city residents only - temporarily, they hope - about a year ago. Lexington announced earlier this year that its program would no longer serve out-of-towners. Belmont cut its program a few years ago.

Isis Maternity, whose four Boston-area stores offer classes for expecting and new parents, heard customers fret that they had a hard time finding someone to inspect their car seats. So the company decided to train about 30 of its staff members in its four locations - Arlington, Boston, Brookline, and Needham - to inspect and install them. The training is scheduled to begin next month, and Isis hopes to start offering free inspections this fall, said Nancy Holtzman, the company’s director of parenting programs.

“You’ll find a wide listing of car seat checkpoints, but once you start calling down those numbers, good luck finding an appointment,’’ she said. “They’ll say, ‘We can’t offer that right now,’ or ‘The officer who’s trained is on leave right now.’ ’’

Cambridge police, who once saw many parents from Arlington and other nearby communities, cut back to city residents when they could not keep up with the demand, according to Lieutenant Jack Albert, commander of the department’s traffic unit. He said his section has lost a number of officers, but he hopes to extend the inspection service to nonresidents once the unit is fully staffed again.

The seats, which are required by law for children under age 5 and less than 40 pounds, are notoriously difficult to install correctly. (Massachusetts also requires children up to age 8 or 57 inches tall to use a booster seat.)

To become a certified installer and inspector requires a week of training, with technicians learning how to fasten forward-facing and rear-facing seats in the various configurations posed by sedans, minivans, and SUVs.

The choices of car seats seem endless - Babies “R’’ Us alone sells more than 150 varieties. Models must often be installed differently in different vehicles. And car seat technology keeps changing, so technicians must be recertified every two years.

And the stakes are high: Motor vehicles crashes are the leading cause of death for children ages 3 to 14. Technicians who inspect car seats find that most are not installed or used correctly; a 2001 study for the National Highway Traffic Safety Administration put the figure at 73 percent.

Kym Craven, director of the Massachusetts Child Passenger Safety Program, says the number of people certified as child passenger safety technicians has grown to 681 this year. The certification process is extensive. In addition to 32 hours of classroom time, technicians must take written and practical exams to prove they can correctly install different seats in different vehicles.

At Children’s Hospital, technicians found no problems with the way Kollipara’s infant car seat was installed. But they made an adjustment to the seat belonging to her older child.

For information on arranging a child-seat inspection, go to www.mass.gov/childsafetyseats. Kathleen Burge can be reached at kburge@globe.com.