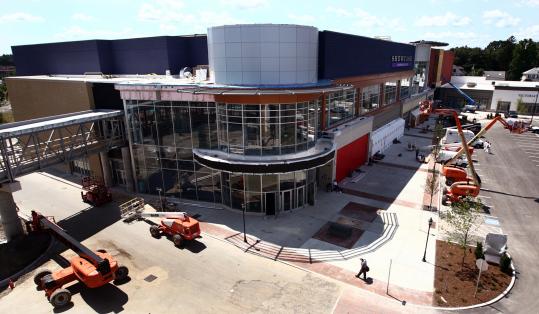 DEDHAM - The first “lifestyle center’’ mall inside Route 128 makes its formal debut in Dedham today, offering the potential to dramatically alter the retail landscape in a town known for its strip malls and big-box outlets.

Legacy Place, the first big shopping center alongside Route 128 between Burlington and Braintree, is built in the increasingly popular mold of so-called lifestyle centers - essentially open-air malls that mix high-end specialty retail shops with dining and entertainment, in a pedestrian-friendly setting that allows for parking near stores.

As with all real estate developments, location will be key to its attractiveness for Boston-area consumers.

“It is probably going to be the showcase lifestyle center for metropolitan Boston,’’ said Robert Sheehan, vice president for research at Keypoint Partners, a Burlington commercial real estate company. “It has very good regional accessibility. It has a tenant mix unlike any other in the Boston market.’’

The new shopping center - extending from the site of a longtime Showcase Cinemas multiplex, just off the Route 1 interchange with Route 128/Interstate 95 - and its lineup of establishments may be closer to Boston’s Newbury Street than to a typical suburban mall. It includes Kings bowling alley, Stil Studio, Sugar Heaven, Lucky Brand Jeans, 344, and .

“It is really something new and different and fresh on the area’s retail landscape,’’ boasted Brian T. Sciera, vice president of lifestyle centers for WS Development Associates, the Chestnut Hill company that developed Legacy Place. “It is a new urban-suburban experience.’’

Its arrival has sparked a range of emotions in Dedham. Many residents welcome its new jobs and municipal revenue, but also worry about added traffic in nearby neighborhoods and on the busy arteries that already feed a steady stream of motorists through their town.

Supporters of the 1927 Dedham Community Theatre, a two-screen movie house in nearby Dedham Square, are concerned about competition from the 15-screen National Amusements theater opening this weekend at Legacy Place. The new Showcase Cinema de Lux will serve as the Dedham-based theater and entertainment chain’s flagship, replacing the 12-screen venue that started with just three at its launch in 1973.

Providence Highway, still commonly known by its former designation as Route 1, has long been a magnet for retail. But most of the development, including the long-struggling Dedham Mall, has been big-box stores and strip malls, lacking distinctive character. With Legacy Place, the town’s retail profile changes dramatically.

“We think this will position Dedham as a regional retail destination,’’ said Karen O’Connell, the town’s economic development director.

Town Administrator William Keegan said the mall will bring much-needed jobs and tax revenue. “In a time when the economy is in a difficult place, it’s great to see this bright spot in the town,’’ he said.

With Dedham’s new retail attraction, though, will come increased traffic. Despite the redesign of several intersections in town, residents are bracing for complications.

“When this development opens, Dedham will be the traffic capital of Massachusetts,’’ said Thomas E. Gorman, a local real estate broker and political activist. “The biggest concern for longtime residents is the impact on traffic in the neighborhoods.’’

Keegan said town officials will monitor traffic carefully. Intersection improvements and new entrances to the shopping center should be sufficient to prevent major problems, he said.

Sciera, at WS Development, noted that engineers for the town and state approved the traffic plans after a lengthy review. “We think it will work well,’’ he said.

Another concern is the competition Legacy Place will present for area businesses. Dedham Square, the town’s traditional center, is barely a mile away.

WS Development has agreed to highlight Dedham Square with an informational kiosk at Legacy Place, and the National Amusement theaters will play a promotional video about the downtown before its film showings.

Sciera said Legacy Place actually should help by attracting more customers to Dedham. “We think it is going to draw attention to the whole area. A lot of businesses will take advantage of the rising tide,’’ he said.

Amy Haelsen, executive director of Dedham Square Circle, an alliance of downtown interests, agrees. “We are really seeing the opening of Legacy Place as an opportunity to introduce people to Dedham Square,’’ she said. “While there will be increased competition, there’s really no reason we both can’t exist.’’

The biggest worry for many downtown advocates is the future of the recently renovated Community Theatre, one of the area’s last surviving downtown movie houses. Owner Paul McMurtry, who is also Dedham’s state representative, said he is afraid there won’t be enough films to go around when the 15-screen megaplex opens.

“I am concerned,’’ he said. “We are continuing to work with the studios to let them know we want to continue to exist.’’

Haelsen said the Dedham Square theater’s survival is critical to other businesses, noting that its customers also support nearby restaurants and shops.

WS Development and Legacy Place’s retailers acknowledge that opening a high-end shopping center in the midst of a recession carries risks. However, they said, they are encouraged by the performance of businesses that opened early.

Bob Miller, senior vice president of shoe retailer Clark’s Companies of North America, which has a store at the mall, said: “We think the demand is going to be strong. We think there will be a lot of curiosity about the center.’’

City Sports, which opened at Legacy Place earlier this month, was drawn to its location next to Route 128, said company official Robert Whitman.

While today is the official grand opening of Legacy Place, 22 stores opened earlier this summer, and only four additional establishments are opening this weekend. The remaining stores have delayed opening until later this year or early next year, either for logistical reasons or to wait for the economy to improve.

But while smaller storefronts will be vacant for a while, three of the four largest establishments are open or are about to open. L.L. Bean had its grand opening July 24; the Showcase Cinema de Lux opens tomorrow; and will open Wednesday. Borders bookstore has not scheduled an opening date.

Fortunate timing is the main reason the company was able to complete the project as planned, according to WS Development, since it secured financing and recruited tenants before the credit crisis hit last fall. “No question, we were blessed with good timing,’’ said Sciera. “We had a good portion of our leasing done before the world changed.’’

Westwood Station, another big development set for the Route 128 corridor, was slightly behind Legacy Place in its early planning, and has been on hold since early this year.

Still, the recession has had some effect. The upscale Ruth’s Chris Steak House chain dropped its plan for a restaurant at Legacy Place. And National Amusements is delaying a project to replace its corporate offices with a new headquarters complex next to the shopping center.