Looking for lessons after a longer day

A high-profile experiment extending learning time for students has one school heaping praise, another voting to drop out 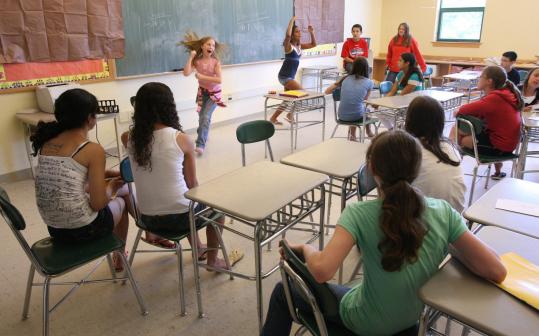 Last September, two Framingham schools embarked on an experiment hailed by some as the cornerstone of education reform: They lengthened the school day.

Nearly a year later, most parents at the Brophy Elementary School commend the program and its boost in academic achievement. But at the Cameron Middle School, the experiment is being halted after teachers voted it down.

The Expanded Learning Time Initiative is gaining new adherents - parents in Newton recently invited one of its high-profile advocates, former Democratic gubernatorial candidate Chris Gabrieli, to present the benefits of children spending more hours in the classroom. It also won praise from President Obama and is serving as the model for national legislation.

But as three schools in the state quit the program (including two in Southbridge) and funding problems shadow efforts to add others, the wild mix of victories and defeats suggests how difficult it can be to implement a policy that involves budgets, teachers’ schedules, and a cultural shift.

“American students spend about 30 percent less time in school than students in other leading nations,’’ Senator Edward Kennedy stated last month in published remarks introducing legislation, known as the TIME Act, that would provide federal funding for expanded learning. “This gap hinders the ability of our students to compete with their peers around the globe who derive a significant advantage by having more time to learn what they need to know.’’

The three-year-old program to promote a longer school day in Massachusetts is showing some benefits, including higher test scores. But thanks to the ongoing recession, it also ran up against funding problems. All the schools that want to continue this fall will get the money to do so. For the first time since the effort’s launch, no new schools will be added, even though there are 30 who are deep into the planning process.

“It stops the momentum of expansion, but I think everyone appreciates we’re in a bigger context here,’’ said Gabrieli, chairman and cofounder of Massachusetts 2020, the nonprofit organization that dreamed up the initiative. “This is a very promising intervention for high-poverty, low-achieving students and schools.’’

Gabrieli said that winning enough funding to continue the program at all the schools that wanted to is “a vote of ringing endorsement’’ from the state government, given the weak economy.

Statewide, there are 22 schools participating in the Expanded Learning Time Initiative, which started with 10 schools in 2006, and serves lower-income districts in such communities as Cambridge, Fall River, Revere and Worcester.

The program adds at least 300 hours to the school year, and participating schools receive about $1,300 in extra funding per student to pay for it.

On average, MCAS proficiency rates went up after just one year in the program, according to Mass. 2020’s annual report.

Gabrieli pointed to Boston’s Clarence R. Edwards Middle School, one of the original 10 participants, as a prime example of the program’s success. The school is quickly closing the large achievement gap between its students’ MCAS scores and the state average.

Each school implements the program differently. At Framingham’s Brophy Elementary, the extra two hours per day were used on core curriculum subjects, as well as clubs such as Chat in Spanish, Mad Scientist, and Nature Zone.

A parent survey at the end of the school year found that 75 percent were either “very happy’’ or “somewhat happy’’ with the program, officials reported, while another 9 percent were “neutral.’’

Although the Massachusetts program targets low-income schools, some wealthier districts are also interested in redefining the school day.

Newton parent Emily Norton is a member of Newton 20/20, a local group that invited Gabrieli to talk about Expanded Learning Time last month.

She said she hopes to get parents talking about the program now so that by the time there is real momentum, there might also be funding.

“The fact that ELT has only been pushed and funded in low-income areas is not because it’s only good for low-income areas,’’ said Norton. “All of our public schools need to be shaken up and need to get more done for the kids.’’

Even in a higher income district like Newton, she said, there have been cuts to the arts, and not all students have someone at home to help them with homework or to pay for extra activities.

Parents in upper-middle-class communities have already voted with their wallet, said Gabrieli. By paying for after-school activities, they are effectively saying they want more, he said.

“I think you will see more and more suburban and middle-class communities thinking harder about this issue, and wondering if maybe they shouldn’t expect more from schools,’’ said Gabrieli.

Mass. 2020 is working on an official count, but the group estimates that nationwide about 1,000 schools have a longer school day. Only Massachusetts has a statewide policy to support such programs, Gabrieli said.

Schools in middle- and upper-income towns might be less likely to move forward for the same reason the program is aimed at lower-income students: wealthier kids tend to already have enrichment activities.

Six schools in Andover went through the planning process during the 2007-2008 school year, and all independently chose not to go forward.

“I just didn’t feel that we had the parent community behind us,’’ said Patricia Barrett, principal at Sanborn Elementary School, one of the six.

Some parents were opposed because of worries over earlier start times and lack of control over what their children did in the afternoons, she said.

In Framingham, Cameron Middle School quit the program, much to the dismay of Gabrieli, the school’s principal, and one of the heads of the local teachers union.

Rosemary Jebari, copresident of the Framingham Teachers Association, said she was shocked when Cameron teachers voted this spring against continuing the initiative.

“I think that Cameron teachers felt that it wasn’t benefiting the students, and I think that was primarily because they had quite a few problems in the first year,’’ she said. “I feel they didn’t have confidence that those problems would clear up.’’

A key complaint was the lack of collaboration time, which was supposed to increase but actually decreased as a result of the program, according to Jebari.

Under Expanded Learning Time, the school is supposed to regularly bring in “community partners’’ who offer programs for students so teachers can have time to collaborate with each other over lessons and students, said Jebari, but that didn’t work as planned.

Cameron’s principal, Judith Kelly, said the plan was to build in more staff collaboration time for next year, and she said she was disappointed there won’t be the chance. But she is still bullish on the program’s prospects.

“I still think it’s a great program for any school district,’’ said Kelly. “I think this is what’s going to be the wave of the future.’’