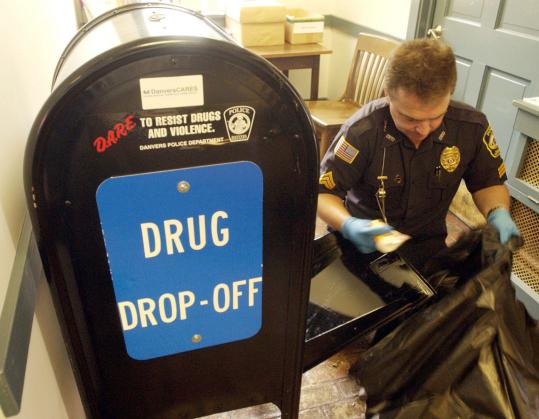 That large US Postal Service mailbox mounted in the lobby of the local police station is not for outgoing mail.

Rather, it’s been repainted, refurbished, and renamed as a receptacle for expired or unwanted prescription medications anyone can drop off anonymously for proper, environmentally friendly disposal.

In light of a nationwide surge among teens in the abuse of prescription drugs found in the family medicine cabinet, many communities north of Boston have adopted drug disposal programs under the directive of the Drug Enforcement Administration and local police.

According to public health officials, one effective way to keep drugs no longer in use out of the hands of teens is to provide a dropoff box to allow safe disposal, 24 hours a day, 7 days a week.

“The national statistics are astounding,’’ said Joan Whitney, director of substance abuse prevention in Gloucester, one of the first communities to set up a dropoff box, in July 2008. “The misuse of prescription drugs is the fastest growing category of misuse nationally, with teens admitting to abusing prescription drugs. We need to limit access and provide awareness.’’

Danvers in January joined Gloucester, Reading, Winchester, and other municipalities in launching a medication disposal program. The DPW repainted the mailbox donated by the Postal Service, reconfigured the locking system, and provided clear signage for drop-off.

The box is monitored daily and emptied weekly, when an inventory of its contents is logged. Police must transport the contents to a local incinerator licensed for destruction of pharmaceuticals.

Disposal of sharps - needles, syringes, or lancets - used in home healthcare by people who have diabetes or other needs for them is not permitted in the dropoff boxes; however, a separate collection procedure is in development for July 2010, when a new law takes effect that prohibits the disposal of sharps in the trash, said Heather Jones, director of community and public relations for Northeast Health System, parent company to Beverly Hospital.

Drug take-back programs are a collaborative effort among police, hospitals, public health departments, schools, and various community groups. While several communities in 2000 held a one-day drug disposal program in conjunction with a town hazardous waste day or another community event, many communities recognized the need to do something more in light of the alarming results of youth risk behavior surveys conducted in the schools.

“We’ve seen an increase in what the kids call ‘pharm parties,’ where kids bring prescription drugs they get at home, pour them into a bowl, and pass around to take randomly,’’ said Danvers Police Sergeant Robert Bettencourt, community relations officer. “They don’t see the potential risks in medicines prescribed by a doctor because they think they’re safe. And the kids say these drugs are very easy to get from unsuspecting parents and grandparents.’’

While having an active medication disposal program helps limit access to pharmaceuticals, it is just one way to combat the problem, said Peg Sallade, coalition coordinator for Danvers Cares, an arm of the School Department funded by federal and state grants.

“We need to get the message out to parents,’’ said Sallade. “Let’s talk about it. Parents need to set limits and express disapproval. Kids do listen.’’

Since the launch of drug take-back programs is relatively new, their long-term effectiveness has yet to be measured. However, since its inception in 2007, more than 125,000 pills and five boxes of liquid medication have been collected in Winchester, said Elizabeth Silva, director of Winchester Substance Abuse Coalition. During a one-day event in April at Beverly Senior Center, 8,000 pills were collected, said Jones.

Drug disposal programs also serve a crucial environmental purpose - keeping the public water supply safe. For decades, doctors and pharmacists recommended disposing of medications down the drain or toilet. The effects of that practice have now come to light, with trace amounts of prescription drugs turning up in the water supply nationwide, said Whitney.

Prescription drug abuse and misuse among our teens is perhaps representative of a more far-reaching epidemic in our country, as evidenced by recent celebrity deaths due to possible prescription drug overdoses.

“Parents can use the news in the media in a positive way,’’ said Sallade. “Good conversations can come out of what’s happening in the news right now.’’

Bella Travaglini can be reached at bellatrav@gmail.com.