Pitching in to salvage the season 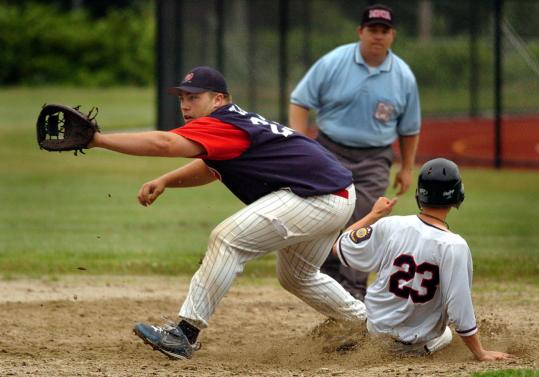 Hanover’s John Spitz slides safely into first on his infield hit as Whitman-Hanson’s Anthony Glynn waits for the throw. (Photos By Debee Tlumacki for The Boston)
By Justin A. Rice Globe Correspondent / July 12, 2009
Text size – +

Before the American Legion baseball season, Steve Kirby was willing to let his starting catcher try his hand at pitching, but the Hanover Post 149 coach had no idea he’d have to press Rich McHugh into his regular rotation.

The soggy summer has washed out several games, forcing Kirby, his fellow Zone 10 coaches, Zone 6 teams and the rest of the region to scramble their schedules and pull players from all corners of the diamond to throw from the mound.

“We need innings and arms,’’ said Kirby, whose team won the Legion state championship last summer. “Kids have had to step up in ways they weren’t predicting to have to.’’

McHugh said the wet and wild weather has also given younger pitchers the opportunity to play.

“We’re facing teams’ No. 6 and 7 pitchers just because there are so many games bunched together,’’ said McHugh, a Pembroke native who is transferring from Southern Connecticut University to Stonehill College for his sophomore season this fall. “The pitching is really down this year because guys who wouldn’t normally be pitching are getting an opportunity to pitch.’’

The result has been that a zone that has produced three of the last four state championship teams (Sandwich Post 188, Brockton Post 35 and Hanover) has looked pedestrian this season. Hingham Post 120 coach Vin Murray, whose team (11-3-1 as of Wednesday) sat in second place behind Sandwich, was worried about making it out of the zone playoffs.

“I always say Zone 10 is the toughest zone in the state,’’ he said.

But heading into this weekend, even the best teams were fighting to be among the top eight to make the playoffs, which begin Tuesday, as teams were forced to play as many as three consecutive doubleheaders. In nearly a decade as the Zone 10 chairman, Jack Grandy has not seen this much rescheduling.

“This has to be labeled as the rainforest season,’’ he said.

Nobody has been hit harder by the rain than the two teams that had high schools in their district go to their respective state championship games this spring. Both Plymouth Post 40 and Abington Post 112 had to reschedule the first four games of the season because most of their kids were still playing for either Plymouth North (eventual Division 2 runner up) or Abington High (Division 3 champs). Plymouth Post 40 was 6-7 as of Wednesday and in 13th place. It had to reschedule 11 of its 20 games. Abington (6-5, 11th place) rescheduled a dozen games itself.

“We have nine games left to play,’’ Abington coach Peter Seriano said on Wednesday, “which is going to be a bit of a challenge pitching wise. I don’t think even the Big League staffs could pull off nine games in five days.

“I had guys come up to me and say, ‘Coach, I used to pitch when I was 10, I will give it a shot this weekend.’ As funny as it sounds, he’ll probably be on the mound.’’

The wet weather has taken the joy out of the Boys of Summer, Seriano said.

“For a lot of these kids it’s not really fun when you don’t have pitchers and you’re going against teams that do,’’ Seriano said. “It puts guys in tough positions. They are all competitors and they want to go out and win. So it’s tough to tell a kid to go pitch when he pitched two nights ago and threw 100 pitches.

“I don’t want them to hurt themselves. At the same time, they don’t want to let their team down. It’s a tough spot to be in. It’s taken the fun out of it in some ways.’’

And Seriano has had to dig deep for pitching even though Abington’s ace was the Globe’s Division 3 Player of the Year in football, Steve Perakslis. Seriano gave Perakslis a break at the start of the season and, just like Hingham, was forced to use a regular catcher on the mound. Ian Campbell, who caught the state championship game for Abington, pitched seven innings for Post 149 as of Wednesday.

In the catcher conversion department, it’s hard to imagine anyone pitching better than McHugh has for Hanover. He tossed a complete game last Monday, a 7-2 victory against Middleborough to improve to 3-0. Making his efforts all the more impressive is the fact the McHugh is the only catcher on the team experienced enough to call a game, telling pitchers what pitch to throw.

“I just execute pitches, I don’t think about it,’’ said McHugh, a Thayer Academy graduate. “That’s the difference’’ between pitching and catching.

That was a big adjustment for McHugh, who struck out 14 batters, walked six and allowed 18 hits as of last Monday.

“I talked to coach Liffers early in the season about what I like to throw,’’ said McHugh, who hurls a fastball, curveball, forkball and slider. “We really worked on calling the game. I haven’t had a problem. There might be one or two pitches I don’t agree with, but Liffers does an outstanding job calling the game.’’