They call it guppy love 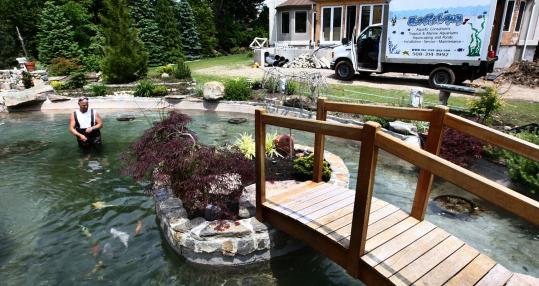 The call came in around midnight. The couple said when they returned to their home from an evening out they found the fish in their aquarium gasping for breath. Could they be saved?

Josh Wolfson, "the Fish Guy," hopped out of his Framingham bed and into his truck, and sped off to his patients' tank side. The Dorchester residents were loyal customers, and he knew how much their grandson enjoyed the aquarium. But he was too late, and it would be six months before he solved the mystery of the suffocating fish.

Like the critters he cares for, the Fish Guy never seems to rest. Now in his fourth year of business, Wolfson has about 120 regular clients, including homeowners, doctors, restaurants, and retail stores such as Nordstrom (check out the 200-gallon aquarium in the children's shoe department at the Natick Collection store). He builds and maintains aquariums, water displays, and artificial ponds. With routine servicing requiring monthly, sometimes weekly, visits, Wolfson says he works 14 hours a day, seven days a week, holidays included.

You may have seen his truck, its sides painted like an aquarium. On some days Wolfson logs as many as 350 miles as he makes calls throughout Greater Boston.

A typical morning began with cleaning a 57-gallon aquarium in Dover, followed by adjusting a filter and pump at a 30,000-gallon pond in Westwood. From there, he headed to Uncle Ned's Fish Factory in Millis (where the 37-year-old got his start in the aquarium business) to pick up a pair of koi for a pond in Weston.

"Most of my customers have never been in a fish store," says Wolfson.

Wolfson's aquarium installations range from basic factory-made tanks to custom-built wall units with elaborate plumbing and filtering systems. Customers draw up a wish list of fish after browsing through books he lends them. Wolfson strikes off the incompatible species and then rushes to get in his orders each weekend when wholesalers release their lists of available tropical fish.

Populating an aquarium requires knowledge of fish psychology. More aggressive species, like triggerfish and wrasses, go in last; otherwise, they'd harass all the new fish. In aquariums, as in life, there tend to be king fish. In the Dover tank, a blue hippo tang (like Dory in "Finding Nemo") tries to push the other fish around. Wolfson would rather err on the side of having too many fish in the tank, in order to keep potential bullies in check.

On a typical service call, he'll replace 20 percent of the aquarium's water, scrub algae off the walls and, using a gravel vacuum, siphon detritus from the bottom.

The fish are "eating and going to the bathroom in what is effectively their home and their toilet," notes Stephanie Kendall, whom Wolfson is training to help with the aquarium work. "You have to periodically go in and get rid of this stuff regardless of what the water looks like."

Saltwater tanks are particularly tricky to clean because you can't just add tap water and salt; the various trace metals that are in the sea need to be included as well. Wolfson uses test strips to make sure the chemistry is right.

Since he is in customers' homes on at least a monthly basis, Wolfson says, he realizes it's as important to befriend the clients as well as the fish. "I have to remember the husband's name, wife's name, kids' names, the dogs' names," he says. Somehow, he manages to combine a laidback, genial manner with Type A work habits.

This time of year, Wolfson spends much of his time outdoors, building or cleaning ponds. If necessary, he'll drain the pond, placing the fish into huge buckets while he scours the basin (generally made of a rubber or a cement mixture called gunite). Otherwise, he'll slog in wearing chest-high waders.

The more spectacular ponds feature waterfalls tumbling over natural or man-made cliffs, which Wolfson in some cases helped design and build, creating a secluded nature sanctuary just a few steps from a suburban street. The Weston pond, where Wolfson took the koi, is just minutes from Route 128, but it feels like it's off in the Berkshires.

The Fish Guy has been infatuated with fish ever since he was just a young guppy.

"There are pictures of me in diapers holding my father's little 10-gallon fish tank," Wolfson says. "I've always had at least one fish tank in my life. At one point I had 26 fish tanks in my house - in every room."

A little over four years ago, he decided to quit his day job in the operations department at the MathWorks Inc. headquarters in Natick to pursue his passion full time.

"When I first started, I thought I could drive around in my truck and clean out fish tanks. How hard could that be?" he says. "I never thought how sophisticated the job would become."

Wolfson had already been using thefishguy in his e-mail address, so he made that the company's name. To run his marketing campaign, he enlisted his mother, who at the time worked full time as creative services manager at Boston University.

"He had a dream, and I wanted to make sure I did everything I could to help him see the dream through," says Carole Freeman, whose Framingham home doubles as company headquarters.

Wolfson says he has a knack for tinkering. As a kid, he would hang around his stepfather's auto-body shop or pull apart and reassemble bicycles. He studied automobile mechanics for two years at Massachusetts Bay Community College.

Wolfson is as comfortable stripping down broken pumps as he is strapping on scuba gear to unclog pond drains. If he can't do a job himself, he has a ready list of electricians, plumbers, landscapers, stoneworkers and acrylic fabricators. He even has a guy who makes custom hoses.

While he has no formal training in marine biology, Wolfson has made himself something of an authority. He has little choice. With some fish costing as much as $600, he can't afford to lose any. Besides, he likes a good whodunit - such as that one in Dorchester.

It turns out the tank's coral was the culprit. Wolfson says this was a case where he was hired to maintain a tank someone else had installed. When he started on it, the aquarium was in poor condition, and its coral colony was floundering. But with care, the coral flourished, emitting oxygen by day and carbon dioxide at night. However, since it was a closed system, the fish eventually succumbed to the nighttime CO2. As a temporary fix, he vented the aquarium, which he has since replaced.

Initially, Wolfson said, he was worried that his business would sink with the recession. Instead, it's grown. "People aren't traveling as much," he says. "They're putting time and effort into beautifying their home."

He put his mother officially on the payroll this year to manage the books. And perhaps with the help of Kendall, his new assistant, he'll be able to get away to enjoy his other hobby.

Yes, you guessed it: fishing.

Even if your interest in fish is limited to recipes for salmon marinade, some fascinating facts can surface when spending time with the Fish Guy:

Koi, which originated in Japan and now are a staple of backyard ponds, can grow to be 6 feet long and live to be 100.

Dory, a character in the Disney movie "Finding Nemo," sent the price for a hippo tang soaring from $20 to $80.

Pistol shrimp burrow into the sand and keep house for goby fish, which in turn protect the shrimp and bring them food.

Clown fish get the last laugh on their predators by living inside anemone, a relative of coral with stinging tentacles.