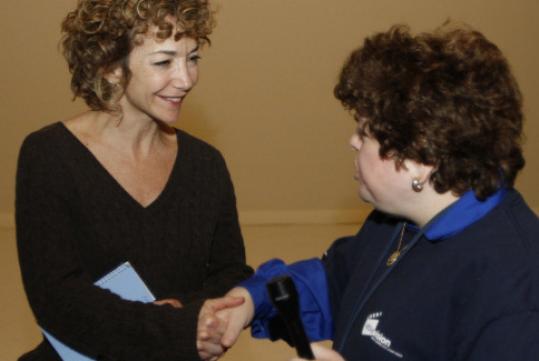 A TV crew came to profile a visiting dance troupe at the Institute of Contemporary Art in Boston, but it wasn't your typical interview.

Crew members, both in front of and behind the camera, were from Ablevision, a TV show created by developmentally disabled adults in the Malden-based Triangle Inc. program. Some members of the dance troupe - from the acclaimed Gimp Project - have physical disabilities, and their differences are incorporated into their performances.

"It was beautiful. I've never seen so much charisma and beauty," said Ablevision's Camille DeGeorge.

"I was surprised there was so much violence," said Ablevision's Chris Alfonso. "You can't do violence at home. Violence is not good when you're out of the house either. But in a dance you can do violence."

A segment about Gimp fits Ablevision's mission by "exposing people with disabilities to the mainstream audience and showing that we're all people with abilities. We're all different people and we all have something to bring to the table," said Alisa Brugnoli, a former WHDH-TV video editor who started working with Ablevision five years ago and has been the full-time executive producer for the last two. "That's another reason I love Ablevision. Our crew gets to see people who are disabled as successful. A lot of times they don't have that in their life."

One Gimp dancer interviewed by Ablevision was Lawrence Carter-Long, who has cerebral palsy and has been interviewed often in his job as executive director of the Disabilities Network of New York City.

"Normally there's a weird kind of power dynamic in play when you've got a nondisabled person interviewing a disabled person," said Carter-Long. "Normally the disabled person in our society, culturally, is somehow seen as beneath them, and anyway people are normally intimidated being interviewed on camera by anybody. When you've got a group like Ablevision out there doing the interview, when you don't normally see disabled people in a position of power, it flips that dynamic. . . . I think for the cast and company of Gimp, it was really refreshing for us."

The award-winning Ablevision is a seen in 44 communities in Massachusetts and a handful in other states, as well as online at www.ablevision.org and www.youtube.com/ablevision. Shows have covered everything from local programs to a multipart interview with comedian Kevin James when he was filming "Paul Blart: Mall Cop" at Burlington Mall.

"We film, we interview, we run the camera, we go on different shoots," said Ablevision's Christine Murdocca. "We have a studio crew, a production crew, and a creative crew."

Back at Triangle Inc. headquarters on a Malden side street, three staffers are learning to edit the footage.

"You edit things out. If you mess up, you take that part away," said Alfonso.

Triangle's mission is to provide participants with independence and self-sufficiency, and Ablevision teaches them video skills as well as life skills like organization and teamwork.

"We try to have these guys run the program as much as possible," said Brugnoli. "They're involved in the process every step of the way, from story ideas to final product."

Ablevision participants are developmentally disabled adults - age 22 to 74 - and some have physical disabilities as well. There's work for all who want it.

"We have a participant who's blind," said Brugnoli. "She can't run the cameras, so she does the interviewing. . . . We have people who don't talk. We just have them behind the camera."

Ablevision was started six years ago by a Triangle client who won a placement at Malden Access Television. He came up with the idea to have media training for Triangle clients, culminating in a one-time show. The first was a success so they decided to make Ablevision ongoing. More than 50 clients are involved now, and there are three part-time staffers in addition to Brugnoli.

"Really our focus is on ability; we like to highlight people who do great things," said Brugnoli. "More and more we've been taking our folks on the road . . . getting them out in the community much more. I think it's important for people to see that people with disabilities can handle the demands of a television program and do a great job as well."

"There's a tenet in the disability-advocacy movement that says, 'nothing about us without us,' and I think the movement to have disabled people tell our own stories from our own perspective is a very positive one," Gimp's Carter-Long said.

And the next step for Ablevision? Murdocca answered like a TV pro: "Get a grant! So we can get paid for doing Ablevision."