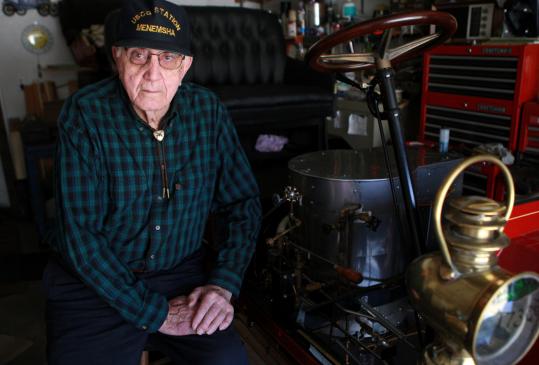 Arthur Funai of Lynnfield has been restoring a 1904 Grout Steam Car in his garage since 1956. (Jonathan Wiggs/Globe Staff)
By David Cogger Globe Correspondent / May 17, 2009
Text size – +

LYNNFIELD - Arthur Funai likes things to be precise. An atomic clock sits on his mantelpiece, synched with a microwave signal in Colorado, and it irks him that the clock is half a second off compared with the digital clock on his cable box.

Funai, a retired manufacturing engineer who worked for for 45 years, will be 90 years old in September. He shares his house with a pet bird that sometimes "gets lonely" and two vintage cars stored in an attached, heated garage.

The top of his dining room table is strewn with papers about the 1904 Grout Steam Car that Funai began restoring in 1956, when he was 36 years old.

Funai's passion is vintage cars. And while it is not unusual for a guy to tinker with and restore old cars, one car, the Grout, has been a work in progress for more than 50 years.

He even speaks of the Grout's progress in 50-year intervals - starting with the tires, which he bought for $750 50 years ago from Firestone. The wheels are made of ash and cost $136 in 1956.

The challenge for Funai has been finding craftspeople - metal forgers, welders, and others who can make boilers for steam engines.

Funai found Don Borden, who runs a sugaring business in Woodstock, Vt., to fashion a stainless-steel boiler for the car.

But while he has had to call on people like Borden to fabricate some parts for the car, Funai has made many of the replacement parts himself, calling on the skills he acquired as an engineer. "In the 1950s, at GE, the tools we needed we had to make," he said.

Funai holds up a model he hand-carved from a piece of mahogany, used as a form to cast a part for the Grout's engine. He also made a jig out of scrap wood and metal stock used to painstakingly bend multiple sheets of thin plywood into the elegantly curved fenders covering the front and rear tires.

Funai created the model and everything else missing on the Grout not from working drawings, but by looking at photographs and actual parts at a museum in Orange, where the Grout was manufactured from 1900 to 1912.

Funai traces his enthusiasm for cars to his father, who had a Hudson Peerless that he lost in the Great Salem Fire in 1914.

The Hudson had been stored on the second floor of a warehouse, where it was being repaired. When the fire struck, the warehouse owner told Funai's father that he had lost power and couldn't get the car down.

His father later called upon a friend whose father was a lawyer in Lynn. He won a case against the warehouse owner by finding out when the power went off that day. "It turned out that he had lied," Funai said.

Later, his father became too ill to drive. But before his illness, he had driven a Beverly Wagon, the forerunner of the modern station wagon, which was so-named because it was manufactured in Beverly.

"People would use the wagons to pick people up at the train station, thus the name," Funai said.

Fifteen-year-old Arthur and his older brother dusted off the old car; removed the head and cleaned the carburetor, and added water.

With no gasoline and no money, they collected three five-cent bottles.

"Gas was eight gallons for one dollar on sale. I got 15 cents' worth of gas and dumped it in the tank. The son of a gun started up."

"I was thinking, oh, jeez, I'm in trouble now," recalled Funai. But his father just smiled, got in the car, and drove it around the backyard.

"I was indoctrinated on old cars, and I have been hooked ever since."

The Grout had been stored in a warehouse basement on River Street in Beverly that belonged to the now-defunct Foster Ford. The car was owned by the Stewarts, a prominent North Shore family. Coincidentally, the warehouse was where another car, known as the Cameron, had been built.

"I asked about the car, and it took me three years to get it. I made a deal with George Foster, thinking the car belonged to him."

When he finally got the Grout, Funai discovered it had serious water damage from being stored in the wet basement along the banks of the Bass River. The water pump was missing, and Funai managed to trace it to Maine, where it was being used to pump well water. Several other parts had also been lost or destroyed.

Funai's Grout holds 39 gallons of water in a boiler heated by a gasoline engine. The car uses one gallon of water for each mile it runs, and travels at a maximum speed of 20 miles per hour. Funai points to the engine, saying the car maxes out at 275 rpm.

When he turns it over, a symphony of gears, arms, and levers turns and pumps back and forth, producing a thumping sound.

Pointing at the rear axle with a yardstick, Funai said, "I'm a little disgusted." The car is making a noise he has yet to diagnose. "I don't remember if I tested it 50 years ago."

Meanwhile, he is working on the fuel system and hopes the Grout will be ready when his 90th birthday comes around.

"There are some leaks, but I hope to have it running by September," he said.

In his rare spare time, Funai attends meetings of the Northeast chapter of the Steam Automobile Club of America. He also lectures about steam cars at a museum in Waltham.

"I am not the kind to get up in front of a group. But if you know your subject, it's easy."

Funai keeps a restored Willys Overland (a Jeep-like vehicle) in the adjacent garage and Model T in a shed out back.

His only son, Nathan, who is 39, will inherit the cars.

Funai says he has to teach Nathan about them, but "I don't care what he does with them when I'm gone. You can't regulate from the grave."