Up on the farm

A wave of interest in green living, community agriculture has area youths (and their parents) flocking to pitch in 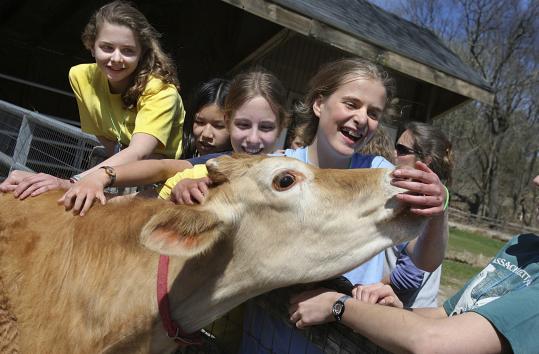 Liana Ghiron of Newton, Hazel Edwards of Acton, and Tori Gitten of Wayland could have spent their spring school vacations at the mall. Instead, they worked six-hour days at Drumlin Farm Wildlife Sanctuary in Lincoln, tending baby goats, mucking out animal pens, and even coaching an uncooperative 500-pound Jersey calf down a country lane.

Alec Delaney and Kevin Bae could have spent April vacation in their Weston homes, racking up Xbox scores or watching movies.

Instead, they studied suburban ecology at Land's Sake, a nonprofit farm and conservation organization in their hometown, trying to find new ways to cultivate shiitake mushrooms for the hundreds of locavores who patronize its farmstand.

Local farms report a boom in educational programs for younger children and job applications from teens, who say they would prefer to get their hands dirty in soil than take a weekend job in a store or restaurant.

"There is a whole new interest in where food comes from which is merging with the whole 'No Child Left Indoors' movement," said Kris Scopinich, education manager at Drumlin, a Massachusetts Audubon Society property that draws 100,000 visitors annually.

Programs for children during the February and April vacation weeks saw a 20 percent spike in attendance this year, Scopinich said, and the farm is expanding its summer programs for grade-schoolers. Even Drumlin's relatively new preschool program on nature and farming is starting to accumulate a waiting list, she said.

"I think parents are stopping to say, 'Wait a minute, I want my kid to get outside and play. I want them to come home tired after some hard work, with dirt under their fingernails,' " Scopinich said.

Katie Pederson of Wellesley, one of the seven middle-school girls enrolled in Drumlin's Farm Hand program during last month's school vacation, was flush with pleasure and exertion after helping her comrades herd the calf to his new home in the Red Barn.

"This is fun," she said. "Staying home and texting your friends all day just gets boring."

More than 1,000 Weston youths visit Land's Sake each year as part of the school district's curriculum. Now more of them are starting to show up at the 40-acre spread on weekends and after school, organizers say.

Some teens, like Delaney and Bae, are part of the farm's Junior Apprenticeship program, which involves at least two weekends a month of service. There is also a fast-growing Farm Explorer summer program for fourth- and fifth-graders, and a year-round Green Power program that pays middle-schoolers minimum wage to help with farm tasks and harvest vegetables for Land's Sake's sold-out community-supported agriculture program and popular farmstand.

Delaney, a Weston High junior, said he comes from an "outdoorsy" family that enjoys hiking, and his mother, Linda, is a Land's Sake volunteer. He also said that he tries to eat organic, locally grown food when possible. "I like to be outdoors," he said. "I don't want a job where I am just sitting." Connecting to nature, and to agriculture, has finally become "not weird" for contemporary teenagers, he said.

That youths from some of the state's most affluent communities are seeking out the farm experience may be an extension of society's new environmentalist sensibilities and a backlash against overscheduled, overpressured regimens designed to feed a college resume, not the soul, some observers say.

He said he would have no objections if they chose farm programs, instead of more competitive music and sports extracurricular activities, as they grew older. "That's fine with me," Ling said.

Land's Sake executive director Grey Lee said he was thoroughly enjoying watching the growth of "the green wave." Land's Sake was founded in 1980 precisely to "fill a gap in our connection to the land that society was missing living so close to a city, " he said. "Suburbanites had seen more and more of their farms squeezed out by development.

"We are here to help society be more sustainable wherever they happen to be living, even if that's a few miles from Boston," he said.

Trish Wesley participated in youth programs at her hometown Natick Community Organic Farm as a teenager in the 1980s, including a stint as a crew chief, before heading off to Cornell University to study agriculture.

One of the oldest and longest-running community operations, the Natick farm has always had a limited number of paying after-school and summer jobs for local kids. Today, teens must apply and interview for the slots, said Wesley, who is now 37 and still involved with the farm.

Wesley said her after-school job was not considered stylish 20 years ago. But in 2009, it's a different story. "I think it's now seen as pretty cool."

"What I like about the farm is how it teaches kids to be conscious consumers," she said. "Children who go through these programs know where their food comes from. They learn that the eggs coming out of the henhouse have to be carried carefully because a hen is only going to lay one every 27 hours. They are learning a ground-level awareness of these things."

Busy suburban families concerned about the recession are also finding farm options as a lower cost alternative to summer camp or vacation trips. Most suburban farm programs tend to cost between $150 and $350 per week, as opposed to much steeper fees for private camps or specialty sports programs.

Charlie Radoslovich of Arlington recently founded Rad Urban Farmers, in which he farms and harvests small plots in the yards of a half-dozen local families who pay for a share of the co-op's total yield.

His clients - many of them dual-income professionals who love local produce but don't have the time or interest to oversee a garden - are also motivated by the desire to show their children that vegetables don't only come wrapped in plastic from a supermarket, he said.

"They want to be more sustainable and they have small kids and want to use this to expose them to gardening," said Radoslovich, who plans to ride his bike between the properties he cultivates. "The kids just love to see what's going on in their own yards."

Greg Maslowe, manager of the 2.25-acre Newton Angino Community Farm, now in its fourth season, says it too is expanding its youth offerings - and a high school internship program - to respond to the boom in interest. Newton teens are increasingly choosing to do community service work at the farm or coming by to conduct experiments for their school science classes.

These days there are eight or so youths who regularly work cultivating crops after school, and Maslowe said he expects more when classes end this spring.

"I think it becomes that kids see their friends here, and it becomes about the social scene for them too," he said.

"I'm very glad it's popular right now, to sweat in the sun and be farmers."