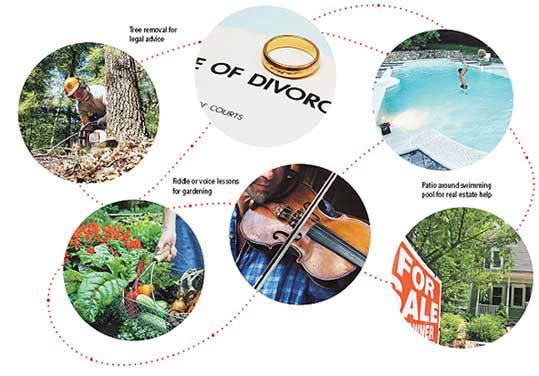 With money tight in a sour economy, more people are turning to the barter system as one way to help make ends meet

Aaron Hutchins has a problem, a 50-foot-tall problem, one that started prickling at his peace of mind after the massive ice storm last winter.

A stately old oak tree stands close to the Northborough house where he lives with his wife and young daughter. The tree is healthy, but what would happen, he worried, if another big storm came along? He decided the oak needed to come down.

But Hutchins wasn't eager to spend a lot of money hiring someone to fell the tree. It didn't seem like an emergency, and he wasn't rolling in cash: in a mid-30s career change, he had just opened his own law practice. So a few weeks ago, Hutchins came up with a solution. He posted an ad online, offering his legal services to someone who could cut down the tree.

"In these tough economic times, wouldn't it be nice if we could just help each other out a little bit?" Hutchins noted in discussing his proposal. "My need isn't an urgent need, so I guess until someone has an urgent legal need, they won't need me."

Hutchins is still waiting to hear from someone willing to make the trade. As the economy remains dormant, many people find themselves in a similar situation. They don't want to - or cannot - pay for things they want or need. Some get creative and try to find cash-free exchanges of goods and services.

Some indicators suggest the number of bartering exchanges is increasing. Earlier this month, a popular advertising website, Craigslist, announced that its barter listings increased by 100 percent during the past year. A bartering website, www.u-exchange.com, which reports 60,000 members in 82 countries, said its membership has nearly doubled over the same time.

In area communities, people who have posted ads online recently include a father willing to perform handyman work for toys for his 8-year-old son, a family that needs some foundation work on their house and is offering a week at a Cape Cod vacation house, and a woman searching for tax help who will reciprocate with writing or editing services.

"Even in bad times, people still have wants, they still have needs, and this is just another way of getting them," said Barb Di Renzo, who founded U-Exchange with her husband, John C. Moore, four years ago. "Somebody out there has what you're looking for."

Di Renzo and Moore, who live in Toronto, said the website took off once the economy faltered, and has dozens of Massachusetts listings, including people seeking haircuts, massages, roof repairs, and plumbing services. Like most of Craigslist's offerings, U-Exchange is free.

When Hutchins posted his offer online earlier this month, it wasn't the first time he turned to bartering. When he opened his law office late last fall, he drew up an estate plan for a couple in exchange for them designing and maintaining his website.

Shelley Goes, a realtor in Millis, found herself in a similar situation after opening her own real estate business in December 2007, just as the market started its slide. Many potential clients, she found, prefer a larger company. At the same time, she would like to make some improvements to her home: adding a concrete patio around her in-ground swimming pool, refinishing her hardwood floors, interior painting, yard work.

So Goes, 39, went online to offer a trade - her home-selling services in exchange for her list of home-improvement projects. On a $350,000 house, that would save someone a $7,000 sales commission, she said.

"I need stuff done to the house, the yard, the pool," Goes said. "If we can save each other some money, why not?"

At last count, she had gotten one response, although she declined to swap services. The house for sale was too far away, she decided.

Even though money doesn't change hands when people barter, they may owe taxes on the exchange. The Internal Revenue Service requires taxpayers to report the fair market value of goods or services they received through bartering as income on their tax forms each year.

Lincoln resident Abby Wolf turned to bartering to help her learn to play a violin she received as a Christmas present a few years ago. She's offering to trade gardening services for instrument or voice lessons. Wolf, 24, works in a nursery and is trying to start a gardening business.

"I don't have much money," she said, "but I have time and I have knowledge that I want to exchange for someone else's time and knowledge."

Kathleen Burge can be reached at kburge@globe.com

Fiddle or voice lessons for gardening