Up to the plate

Even in rough economic times, independent and chain restaurants aren't afraid to venture into the region 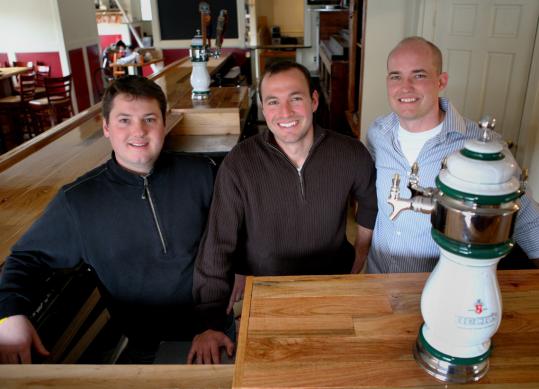 For the past two months, brothers Bradley Atkinson and Ryan Cox and their cousin, Noah Goldstein, spent their time remodeling a vacant Western Avenue restaurant in Essex. Christened The Farm Bar and Grille, the rumor around town was it would be the set for an upcoming Adam Sandler movie.

To be a film prop, after all, could be the only explanation why three guys in their 20s would build a restaurant/bar/ice cream parlor - with an outdoor volleyball court thrown in for good measure - in the midst of a recession that has reacquainted many people with their own pots and pans.

But The Farm is very much real, and the fruition of a lifelong dream for Atkinson, 26, of Gloucester, Cox, 29, of Essex, and Goldstein, 27, of Reading, who quit their high-paying, secure jobs as an environmental engineer, lawyer, and sales executive, respectively, to devote all their time to the restaurant.

While many local and chain restaurants north of Boston have thrown in the towel, others have jumped into the fray, fingers crossed, including Pollo Campero in Chelsea, Olive Garden in Methuen, and Tavern in the Square in Salem.

Whether it's a national chain forced to make good on a years-old prerecession lease agreement or independent entrepreneurs brimming with optimism, going forth with a restaurant is quite the gamble, said Ken Ardon, an associate professor of economics at Salem State College.

"I'm surprised people are opening up their own restaurants now," Ardon said. "It's an incredibly risky time to do something like that. There's less money being spent; it's just a tough time. I don't think it has bottomed out. . . . Unemployment is going up and it's still going to go up.

"People are not going to go back to their old spending ways. Good luck to all those opening restaurants, but a lot more restaurants in Massachusetts will close than will open."

In a time when workers are being forced out of their jobs, the three relatives and best friends said leaving their jobs was less of a risk and more of an inevitability. They'd been saving money since graduating from college and were waiting for the right place, right time, and right circumstances. Despite wiping out all their savings and using a couple of credit cards, the three proudly said they took out no loans to finance The Farm, which opened April 15 to large crowds that spilled out the door, Goldstein said.

"We saw all the people that were losing jobs, and we saw how fragile the market is and how you don't really control your own destiny of when you work [for someone else]," Cox said. "Something you need, especially in an economy like this, is a lot of energy and a lot of confidence."

"Life is like 10 percent what happens and 90 percent how you react to it," Goldstein added. "Whether the economy is up or down, it doesn't matter, we're confident in our abilities and we can execute. So regardless of the recession, we know we'll be incredibly successful."

Great success can be had in the middle of a recession, as Central American fried chicken chain Pollo Campero is proving in Chelsea. In its opening week early this month, Pollo Campero attracted hours-long lines and sold 95,000 to 100,000 pieces of chicken, said Jeff Ackerman, president and CEO of Wellesley-based Chair 5 Restaurants, which acquired the Massachusetts and Rhode Island rights to Pollo Campero two years ago. Chelsea's location, the first in New England, attracted customers from as far away as Worcester and Providence, Ackerman said. By year's end, Chair 5 anticipates opening its second Pollo Campero in East Boston and another in Rhode Island.

While confident in the Pollo Campero brand and its ability to do well in the region's high-density, Latino-heavy communities, Ackerman said the recession offered at least one bump in the road.

"We had financing pulled from this project from a national lender, so we ended up doing this with a local community bank," Ackerman said. "We were confident and had the conviction to make the investment to persevere during these times, but you really never know until you open these stores."

The advantages to opening a new restaurant during a recession include attractive real estate pricing, access to an increased pool of potential employees, and the availability of experienced managers, Ackerman said. Pollo Campero created 80 new jobs, for which it received more than 1,000 applications, he said.

"Even in this very difficult time, local unemployment is 7.5 percent, which means 92 percent are still employed. Those still employed are looking for a better value for their money," Roberts said. "We're doing fine in Chelsea - not as well as we'd like, but we are building, the sales are growing in this economy, so that's the good news."

Like Chelsea, Methuen is experiencing several openings, most notably the anticipated arrival of Olive Garden to The Loop in mid-October. Olive Garden will occupy the space left behind by Romano's Macaroni Grill, which shut down March 17.

In the last nine months, Methuen has seen the opening of five new eating establishments, ranging from a Dunkin' Donuts to Casey's Hideaway, a pub and grill, said Karen A. Sawyer, the city's director for economic and community development. Five establishments, including the Dairy Queen downtown, are slated to open this year.

"We've been lucky throughout this economic downturn," Sawyer said. "We have 45,000 residents and that's a pretty good critical mass and we have a healthy retail base."

Its proximity to three major highways, I-93, I-495, and Route 213, and central position between Manchester and Logan airports made Methuen attractive to of Orlando, Fla., which owns the Olive Garden brand, among several others, said company spokesman Mark Jaronski.

The expansion of national chains on the North Shore, such as The and P.F. Chang's China Bistro, was among the factors that prompted Stephen DeSousa to zero in on Salem as the first suburban location for the third Tavern in the Square. With two locations in Cambridge, he decided to offer area residents an independent alternative, with a projected opening date of June 1 on Washington Street downtown.

Like all the others taking a chance during the recession, DeSousa said the main ingredient is a hearty portion of confidence.

"It's a leap to go from Cambridge to Salem. . . . You have to be confident in what you do and see the results of what you've already done," DeSousa said. "If everybody falls into this recession-type cycle, nobody will do anything."