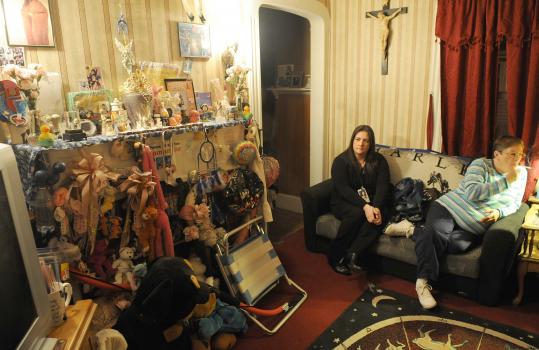 Ruth Burns (left) sits with her mother, also named Ruth, in her Medford living room, where she has set up a memorial to her late daughter, Ashley. (Essdras M Suarez/Globe Staff)
By Kathleen Burge Globe Staff / April 23, 2009
Text size – +

It has been a year since a young, dark-haired woman from Newton collapsed during a cheerleading competition and died, leaving behind her smiling portrait as a grim testament to the dangers of her sport.

The memory of Lauren Chang's death is still so traumatic that members of her Watertown-based cheerleading team, Energy Cheer, sat out last weekend's Minuteman Cheerleading Championships in Worcester, where Chang died last year. That tragedy, as well as another death and a serious injury suffered by cheerleaders in recent years, has placed Massachusetts in a pivotal point in the crusade to make cheerleading safer.

Chang's family worked with state Representative Peter J. Koutoujian to file a bill in the Legislature this year that would create a committee that could recommend ways to make cheerleading less dangerous. Last fall, the mother of Ashley Burns, a Medford 14-year-old who died in a 2005 cheerleading accident, filed a lawsuit in her death. In addition to seeking damages, Ruth Burns is also asking a judge to force national groups that sanction cheerleading competitions and oversee the sport to adopt more stringent safety rules.

And the mother of a Rowley cheerleader, seriously injured last year as she was attempting the same move that killed Burns, is coming forward, hoping her family's story will focus attention on the dangers of cheerleading.

"We'll never get back what we lost," said Kim Kozlowski, whose daughter, Haley Spause, couldn't walk for three months after sustaining a head injury in a fall during a cheerleading maneuver. The Rowley resident decided to talk publicly about her daughter's injury, she said, in hopes that "there's something I can do to push along safety, and make sure this doesn't happen to another family."

Those who advocate greater regulation of cheerleading say that as the activity has become more complex and dangerous in recent decades, safety standards have not evolved to protect young athletes. In their routines, cheerleaders can be tossed 10 to 20 feet into the air, bodies moving at high speeds.

"Modern cheerleading mostly closely resembles the sport of gymnastics, only without the mat and safety regulations," Koutoujian said. "These are serious athletes that literally risk their necks to perform high-level stunts."

A report released a few months after Chang died last April amplified the dangers of cheerleading. In the report, Dr. Robert C. Cantu, clinical professor of neurosurgery at Boston University School of Medicine and chairman of Emerson Hospital's department of surgery, described cheerleading as the most dangerous sport in which high school and college-age women participate. Between 1982 and 2007, more than half of the serious injuries and deaths among the athletes were related to cheerleading, Cantu wrote in the report for the National Center for Catastrophic Sports Injury Research. Many of those who died or sustained serious injuries were fliers, the person thrown into the air during a maneuver.

"What's staggering, really, is that the single most dangerous activity in sports in schools is to be a flier in cheerleading," Cantu said. "The chance for catastrophic injury is exponentially higher than for any other sports activity."

The US All Star Federation for Cheer & Dance Teams, a group created five years ago, has been working to make the sport safer. The group has begun issuing credentials for cheerleading coaches, requiring both a written test and field experience, and within the past year began certifying gyms that offer cheerleading instruction, said Tegan Jemma Reeves, a spokeswoman for the organization.

Reeves declined to discuss the Burns lawsuit, which names the US All Star Federation as well as the American Association of Cheerleading Coaches and Administrators as defendants.

She also said her group was still researching how to respond to Chang's death, although she said the event seemed to have a proper emergency plan in place, and had the required medical personnel onsite. The Minuteman competition was sanctioned by the US All Star Federation.

Ruth Burns was one of the founding family members of the National Cheer Safety Foundation, a California-based group. Kimberly Archie, the foundation's executive director, said that groups that teach young people to perform cheerleading stunts need to pay more attention to safety.

"It's death-defying, gravity-defying stunts," she said. "That's a long way from shaking pom-poms on the sidelines like I did in the '80s."

Archie, Cantu and other champions of cheerleading safety say that the activity should be better regulated. The rules governing cheerleading practices and competitions vary significantly among the groups overseeing the athletes, which can include high schools, gyms, and cheerleading camps. For instance, Cantu said that cheerleading moves should always be performed over mats, but cheerleaders are often asked to perform on hardwood floors or running tracks. The safety rules of the US All Star Federation for Cheer & Dance Teams say only that athletes must practice and perform on "an appropriate surface."

In the three recent Massachusetts cheerleading accidents, parents and others raised concerns about how quickly the young women received medical care.

At the time of Chang's fall last spring, the emergency medical technician on duty was away from the competition, restocking her supplies after earlier injuries.

Kozlowski said an ambulance wasn't called for her daughter until she arrived at the event, held at Triton Regional High School in the Byfield section of Newbury, about 20 minutes after the accident and requested one.

Burns said that her daughter would still be alive if she had received medical care sooner. Instead, she said, after her daughter hit her stomach on another cheerleader's shoulder and ruptured her spleen, coaches at Tewksbury's East Elite Cheer Gym reacted by instructing her to stretch her hands over her head, and then sent her to the bathroom to splash cold water on her face.

The Medford freshman eventually passed out, and gym officials called 911, but it was too late. Burns said she raced to the hospital and saw a priest going into her daughter's room. Soon after, she was told her daughter had died.

In her lawsuit, Burns states that the negligence of the gym, and the company holding the cheerleading lesson, are responsible for her daughter's death.

Burns has turned her Medford living room into a memorial to her daughter, her ashes in an urn above the fireplace. Every night, she lights candles. She has become a crusader for greater safety regulations in cheerleading, and speaks on behalf of the National Cheer Safety Foundation, which recently drafted an emergency plan for groups overseeing cheerleaders, urging them to prepare for injuries and recognize the signs of life-threatening conditions.

Kozlowski said that her daughter was pressured into attempting a complicated move called a double down, in which teammates tossed her into the air so she could spin around twice before landing in their arms, a few days before a regional competition. Instead, Haley, 14, fell to the floor headfirst.

Kozlowski said that she had complained to school officials not long before her daughter's accident that the cheerleaders were told to practice moves that they didn't feel comfortable performing.

"It was a combination of everyone not being taught and there being pressure to succeed and perform," she said.

Haley, who missed months of school, eventually learned to walk again. But she still suffers from pain, and her mother sees a more anxious child who struggles at school for the first time.

Lauren Chang was 20 years old and a Newton North High graduate when she took part in the Minuteman competition last spring at the DCU Center in Worcester. Chang and her teammates were midway through their routine when they performed a basket toss, sending another young woman into the air. When the teammate landed, she accidentally kicked Chang in the chest. Chang ran to the back of the mat and collapsed, and an autopsy showed she died after her lungs collapsed. Chang's family declined to discuss her death.

On Wednesday, the one-year anniversary of Chang's death, all classes were canceled at Energized Athletics in Watertown, the gym where she practiced cheerleading, said owner Kim England. The cheerleading teams decided not to attend the Minuteman championships this year.

Some of the young women who were teammates with Chang dropped out after she died. This year, the team has her initials stitched onto their uniforms.

"It was for Lauren this year," England said. "It was all about Lauren."