Workshops help women get in touch with their inner geek 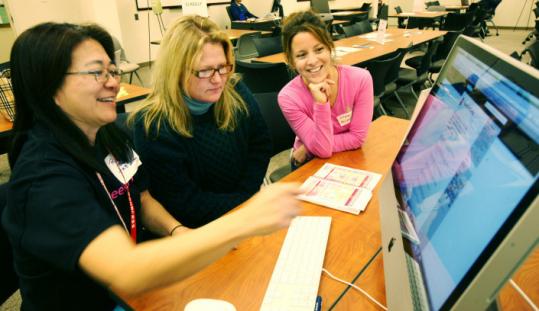 Eyes glued to her iPhone, Leslie Fishlock at first doesn't notice a visitor approaching her at the in Hanover.

"Sorry, I was too busy following the Dalai Lama on Twitter," says Fishlock, who immediately shifts to the thought: "I wonder if Johnny Depp is on Twitter?"

While Fishlock, the chief executive officer of the Cataumet-based web-development firm Genevate Corp., easily traverses the World Wide Web, she knows many women have barely entered the digital age. So for the past two years, she and several other self-described "geek girls" have been trying to bring more women aboard.

"The frustration was mostly based on a fear of technology, always waiting for someone else to do something for them, or paying someone to do it, or just not doing it," Fishlock says.

To help remedy the problem, Fishlock created the Geek Girl Boot Camp, which tries to provide the skills that busy, multitasking women are demanding in order to keep up with their kids. The camp was launched last year with a three-hour event in Hyannis that attracted 120 women and sold out in three weeks.

"With the help of some of my techie girlfriends, we made technology available on a level most women had never been exposed to previously," Fishlock recalls. "It was a huge success, and we had our 'Aha!' moment."

She adds, "There are many conferences marketing to people, but none that are geared for beginners."

Last month, Fishlock organized two all--day Geek Girl Boot Camps in Hyannis and Randolph, both based on the concept of women supporting other women. Volunteer speakers, female-led companies, and foundations came together with the shared dream of empowering women through education.

"It is not about the education you got 10 years ago, it's about what you get now," says Elizabeth Pineault, a board member of the South Shore Women's Business Network, a sponsor of the camps.

Christina Tynan-Wood, the North Carolina-based author of "How to Be a Geek Goddess" and a contributing editor of Family Circle magazine, says women and men associate with technology differently.

Men, she says, like to show off gizmos and talk about their speed, memory, and efficiency, whereas most women just want to learn how these thingamabobs can make their lives easier and more enjoyable.

Tynan-Wood, who also is founder of Geek Girlfriends network, also believes a woman owes it to herself to have a little fun and join a social media site, and that a mother owes it to her children to master such sites so she can mentor them on the ethics of socializing online.

Bullying has gone digital, and if parents simply say "no" to social networking websites, children will not share their digital drama with them, Tynan-Wood says. "Me and my daughter have conversations about these networks all the time . . . during dinner, in the car," she says. "I even sat her down and went through the websites with her."

Fishlock describes the Geek Girl camp as the "amuse-bouche" - or sample -"of the technology world, providing attendees enough of an example of what is out there, what's hot, and what they need to know. Get them excited, and then they need to take the initiative to do it."

At the camp, women of all ages could receive up to eight hours of instruction on such topics as computer hardware and software, the Internet, marketing, social media, Photoshop, blogging, podcasting, and digital photography.

The workshops try to show how technology can help women, many of whom are making their first foray into the digital world, by promoting their personal profiles and businesses.

"I am here to learn how to use social media for my business since it's low-cost marketing," says Julianne E. McLaughlin, business development manager at the Blue LAN Group Inc. in Plymouth who attended the Cape Cod Tech Boot Camp. "You get on Twitter and you get confused. You ask yourself: Where is the main page?"

"There is nothing like this," says Lesa Snider King, who calls herself the chief evangelist of iStockphoto LP, an online member-generated photography and design provider, "a place where you go to for a day, that's affordable, that offers relevant topics."

Snider King has been with the camp from the start, riding a motorcycle all the way from Connecticut to speak at the first event in Hyannis last year and returning again for last month's Cape Cod boot camp.

With her biker pants, King hardly looks like a MacWorld princess. But she is author of "Photoshop CS4: The Missing Manual," founder of the tutorial site GraphicReporter.com, and cohost of "Your Mac Life" Internet radio show.

"This is the medium where women are going to shine. Women are bringing the humanness to the digital dialogue."

The key, says Kench, is taking the first step.