My lair is your lair

Firefighter and his dragon are popular neighbors in Duxbury 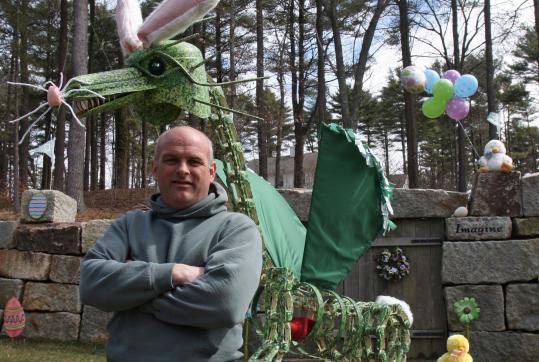 Chuck Nudd of Duxbury built Draco the dragon, who's been embraced by the town, with creative use of a compressor tank and a pick ax. (George Rizer/Globe Staff)
By Christine Legere Globe Correspondent / April 12, 2009
Text size – +

DUXBURY - Residents of this affluent coastal community treasure tradition when it comes to decorating or augmenting their homes and yards. Yet many of them appear to have embraced a celebrity who definitely falls outside this town's accepted standards of taste and propriety.

Draco, a green metal dragon 9 feet tall and 15 feet long, has stood at the edge of a well-traveled stretch of Tremont Street, or Route 3A, for three years - a whimsical creation of Loring "Chuck" Nudd, a local firefighter and lifelong Duxbury resident.

"When I first put him out, I figured, here we go, this is Duxbury and what are we doing putting a metal dragon out front?" said Nudd. "But it's actually been just the opposite. He's gone to football, baseball, and lacrosse games, and we put him in the town's parade every other year."

Draco also celebrates holidays, decked out in costumes fashioned by Nudd's wife, Robin. Halloween is a natural for the dragon. Last October, Robin transformed him into Batman and his setting into Gotham City, complete with the Joker. In February, Robin dressed the dragon as an oversized Cupid to celebrate Valentine's Day. And on St. Patrick's Day last month, Draco donned the green, with top hat, shamrocks, and a pot of gold.

Today Draco is posing as the Easter bunny, with furry ears, a whiskered nose, a fluffy tail, and a basket of eggs. A couple thousand daffodils, heralds of spring, provide a pretty backdrop for the creature, who has apparently succeeded in flying under the radar of any zoning bylaw that might restrict what is placed in one's yard.

"I don't think anyone has ever challenged it," said James Dowd, the town's building inspector. "I think most people appreciate it."

Building commissioner Scott Lambiase, who is in charge of zoning enforcement, agrees with Dowd.

"I've never received a complaint about it," Lambiase said. "We don't have any bylaws that prohibit it because it's classified as a work of art. It's one of those unique and charming things the town has."

Nudd's house is set on a hill, and Draco stands below, in front of a "castle wall" the creator built with large rectangular stones - a fitting setting for a dragon.

But moving him around is no easy task. It takes a Bobcat to lift the dragon's 1,000-pound frame on to a trailer for the trip. "He goes down the street, bobbing along - it's really funny," Nudd said.

Nudd built Draco with the help of his father, also Loring "Chuck" Nudd, in 2006, taking five weeks to fashion the 15-foot-long spine from bulldozer treads. Draco's head is a compressor tank, and his horns are from a pick ax. His narrow snout is constructed from pipe, with a fierce set of garden rake teeth tucked inside. The gleaming eyes are truck marker lights whose color can be changed to suit the occasion.

And Draco's nose is equipped with a strobe light to give the illusion of flames flickering from his nostrils as darkness settles in. Finally, the winch motor "heart" provides power to gently flap the creature's 8-foot wingspan. On special occasions, Nudd may hook up a fog machine in Draco's head that produces "smoke."

After weeks of assembling Draco's many metal parts, father and son sandblasted the finished sculpture with 800 pounds of sand. Family members all pitched in to sponge-paint the dragon with shades of green to create the illusion of scales.

Draco then needed a proper setting, so Nudd, who is also a landscaper, fashioned a 10-foot-high castle wall of rectangular stones, fitted with a large wooden gate. One stone, to the side of the gate, is engraved with the word "Imagine."

"It's telling people to imagine what's behind the wall," Nudd said.

He said Draco's presence has affected traffic in this 40-miles-per-hour zone. "The traffic slows down to 30 in front of here," he said. "I can't tell you how many cars stop and people take their pictures with him. I've even had people knocking on my door asking about him. The horns of cars passing by are always beeping."

Lisa Doty, a manager at the nearby Milepost Restaurant on Tremont Street, said it has been fun watching Draco's progress since he was built. "People who aren't from the area and don't know the story will ask us about it," she said. "And the kids who come in are always excited. They look forward to seeing what he'll be wearing next."

Displays that achieve local celebrity status are few and far between. In south Carver, Clark and Geraldine Griffith have three life-size bears, made of California redwood, on their front lawn on Lakeview Drive that have been a favorite since the late 1980s.

Like the Nudds, the Griffiths enhance their display for the seasons and special dates. "Right now, they're dressed for Disney World. People love them," said Geraldine Griffith.

The bears have been vandalized twice. One summer their swimwear was stolen and this past New Year's Eve their celebratory outfits were snatched. "It's expensive to dress them," Griffith said. "We have to shop for Papa Bear at Big and Tall. He wears a size 6X."

Draco's size has probably kept him safe from would-be thieves, but Nudd said the dragon was tipped over by vandals a couple years ago. "His head and wings were damaged when he fell, so we had to take him in," he said. "I removed him just before Christmas."

"Kids were sending me their allowance money to fix him," Nudd said. "We sent all the money back with a picture of Draco."

When Nudd returned the rehabilitated dragon to his position in front of the house, he bolted the feet securely to the ground.