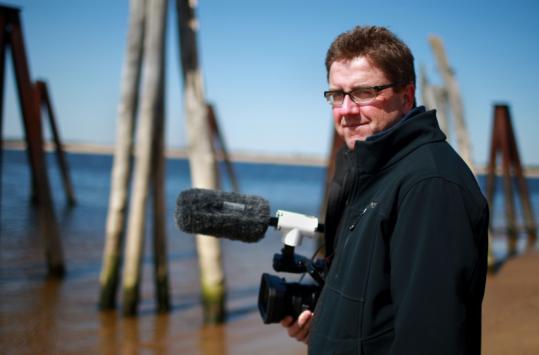 James Waldron's parents brought him to the beaches on Plum Island when he was a boy. He went to Yale, worked in New York City, and traveled all over the world before returning to stay in 2001.

"I forgot I knew how to fish," he said with a chuckle. But soon after returning, he bought an 18-foot skiff from a neighbor and retrieved his old tackle from his parents' house in Chelmsford. Soon he was spending much of his spare time out on his "5,000-square-mile backyard" - the Plum Island estuary.

"I caught my first striper a couple of days in, and that was pretty much the first bit of the heroin," he said. "That got me really interested in fishing."

Flash forward to today. Waldron is gearing up for a screening of his first movie, "Reel People: Fishermen of Plum Island," Saturday in Newburyport. The film is an affectionate and atmospheric hourlong documentary about the local fishing culture.

"Reel People" visits leathery drive-on fishermen on the beaches of the Parker River National Wildlife Refuge and cheerful surfcasters at the mouth of the Merrimack River. It offers a portrait of Surfland Bait and Tackle and the store's oracular Kay Moulton. And Waldron takes viewers places few have been - like hauling in fat stripers on a boat in the middle of the night with "eel slinger" Joe Brotz.

"It's not about how to fish," Waldron said. "It's all about these cool characters."

Soon after returning to the island, Waldron bought a house in the Newbury section, on the basin, and began hanging around at Surfland.

At first, "I was afraid to go into Surfland. It's a pretty intimidating place," he said. "They laugh when they hear that, but . . . I started going to Surfland and learning a little bit of stuff and buying some gear there. And I became aware of the subculture on the island and was trying hard to be part of it."

Waldron also joined the Plum Island Surfcasters. At one meeting in early 2006, founding member Bob Smith brought in home movies documenting fishing on the island in the 1960s and '70s. Waldron, a graphic designer by trade, wanted more people to see them, so he decided to make a film of his own.

"Reel People" is beautifully shot, on a small HD camera. Waldron did it all himself, except for clips from Smith's home movies and classic big-fish snapshots from Surfland. Although he's screened the movie for fishing groups since he completed it late last year and is selling it on DVD, "I am looking forward to seeing it in a real theater," he said.

"I think it's good, especially a lot of the classic stuff from the '50s and '60s that he got from" Surfcasters members, Moore said. "The people that he interviews in the movie are really some of the main players that we have out here fishing."

Waldron has fashionable eyeglasses and spiky hair - he looks like one of the newcomers who have upscaled Plum Island in recent years. But it's clear from the interviews that make up the bulk of the movie that he has won over the natives.

"I had to go and introduce myself to 700 people and that's not my nature at all, so that was probably the most daunting," he said. "I remember going out early and getting an interview with a couple of guys and almost dancing down the beach afterward: 'I did it! I did it! I went up to some guys I didn't know and they were interested in talking!' "

"Reel People" is a labor of love but probably not of profit. Waldron sunk $15,000-plus of his own money into the camera and other costs; he shot more than 100 hours of film and spent many more hours transcribing and editing.

He said he did it in part to explain the allure: "I've got a lot of people who have no idea why I spend six hours at a time out there throwing stuff in the water. . . . I've had guys say, 'I made my wife watch it so she understands there are people worse off than me.' "

Ask Waldron about his best fish and he says with pride that he caught a 36-pounder last year. Where? "In the river."

Where in the river? He smiled and demonstrated that, like a true angling veteran, he has learned not to burn his spot: "I couldn't say."

The First Annual Firehouse Fishing Festival is set for 7 p.m. Saturday at the Firehouse Center for the Arts in downtown Newburyport. In addition to a 7:30 p.m. screening of "Reel People," the festival will feature appearances by Kay Moulton, Bob Smith, Joe Brotz, and others from the movie. There will be a wine-and-appetizer reception. Tickets are $10. For information, go to www.firehouse.org call 978-462-7336. Find out more about the film at www.reelpeoplefish.com.