With the proper appeal, parking ticket may go away 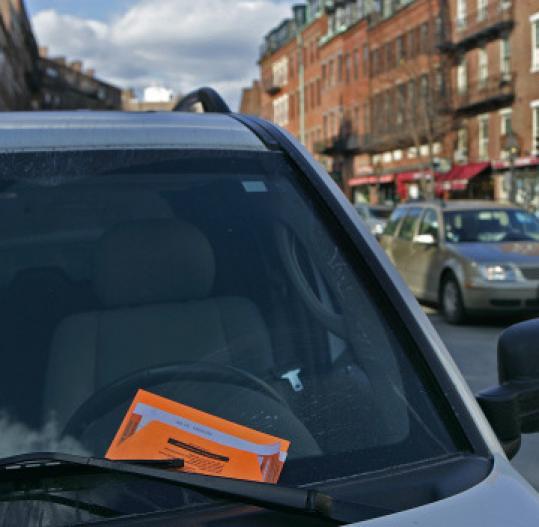 Not long ago I heard an incredible statistic: People who appeal their Boston parking tickets get them dismissed more than 60 percent of the time. 60 percent! Those are incredible odds for spending, what, 15 minutes writing a letter?

The figure got me wondering what else I don't know about parking tickets. Perhaps no one is more knowledgeable on the subject than Gina Fiandaca, assistant parking clerk for the City of Boston, who has spent 25 years in the field and is in her third year of running the ticket department's daily operations. So, I headed to her office, hoping to be enlightened.

Did you know that you can appeal a ticket not only by letter but also by phone or online? Or that the hearing officers who decide your fate aren't city employees but law students from Suffolk University and New England School of Law? Or that the parking clerk's office regularly takes pity on first-time offenders? Fiandaca provided these tidbits and more. Here are the highlights.

Q: What are three elements of a successful appeal?

A: A successful appeal of a ticket would probably be first and foremost some documentation to support the claim, and under that, I would say the first thing would be photographs, a witness statement, and any type of notarized documentation or original documentation. An original repair receipt, an original hospital bill, something like that.

Q: In terms of witnesses, who would that be?

A: Someone would say, well, I was taking someone to a doctor's appointment. Was that person with you? Can they attest that you did not park too close to the crosswalk? Something like that.

Q: So the witness doesn't have to be an impartial person. It can be someone you know?

A: Most of the time it would be.

Q: What if it's just your word versus the parking officer's word? "I know I didn't park in the handicapped spot." How difficult is it for you to adjudicate those kinds of appeals?

A: Hearing officers are trained to be impartial. That's their role - to weigh the evidence that's presented. In many cases they will weigh the word of the individual when they come in. But also their role as hearing officers is to educate the person. Many times someone really did make a legitimate mistake. They didn't realize that a meter receipt from a multi-space meter has to be displayed on the passenger side window, and they may have put it in a different spot that the parking officer didn't see. So they'll educate the person and say, well, we'll dismiss this ticket with a warning.

Q: So just because someone has technically violated the law doesn't mean they will lose their appeal?

A: Certainly we don't want to say that the ticket was invalidly written. So we want to make sure that even though we might dismiss this ticket with a warning, we want you to understand why the ticket was valid. And caution that in future cases, please read the signs carefully, please put the receipt in the proper place in your window, make sure you've really cleared the fire lane, things like that.

Q: For an appeal you have to write a letter, right?

Q: How far will flattery get you?

A: I would keep it just to the facts.

Q: So praising the diligence of the parking officer won't help?

A: They don't get a lot of praise. (She laughs.) Sure, people can try that.

Q: What's the worst excuse you've heard for getting out of a ticket?

A: We did have one case where this individual got a ticket for double parking when he ran up to give his fiancée chicken soup because she was sick. He wrote this big, long letter that he ran up, gave her a kiss, went back down, forgot something in his car, went back up, gave her the soup. It was a pretty involved excuse. Then he was planning to propose to her. It was a whole thing.

Q: He was double parked and was going to propose to her?

Q: I guess if she said no, at least he would have saved himself a quarter. Do you remember the outcome of the appeal?

A: I think we said he really had to pay it.

Q: What happens once you receive someone's appeal?

A: A lot of times we try to resolve an issue even before it goes to a hearing. If we can verify that a sign was recently posted, or a meter was recently serviced, and you got a ticket during that service time or while that sign was going up then [we would dismiss the ticket]. If someone claims that their vehicle was disabled and they couldn't move it, we'll send them a letter back asking them to send us their repair receipt. We try to resolve as much as we can up front before you actually have to come in for a hearing.

Q: So what percentage of appeals get to the physical hearing?

Q: Who decides your appeal?

A: The hearing officers are law students from local law schools, Suffolk and New England School of Law. They're contractual employees. The process is really set up so that they're impartial and they're independent of the customer service people who handle your up-front claim. The hearing process is designed really to be an equalizer.

Q: You have violations for "over 1 foot from curb" and "less than 10 feet fire lane." Do parking officers actually carry tape measures?

A: (She smiles and shakes head no.) They are trained to judge the appropriate distance.

Q: How do you react to people who say parking officers have a ticket quota?

A: They absolutely don't have a ticket quota. To be honest, there's usually no shortage of violations to issue when they're out there. I would say it's not an issue.

Peter DeMarco can be reached at demarco@globe.com. See boston.com/cars and other Globe regional editions for future Drive columns starting April 9.