THIS STORY HAS BEEN FORMATTED FOR EASY PRINTING
Dorchester

Pieces of history, chopped to bits 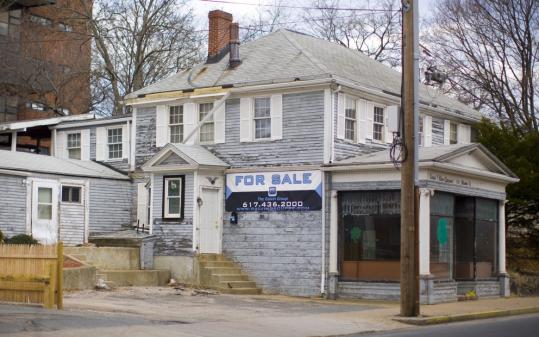 A demolition delay granted for 1203 Adams St. has expired, and the Dorchester Historical Society worries that the circa-1795 property, once used by Walter Baker Chocolate, may be torn down. (Dina Rudick/Globe Staff)
By Emily Sweeney Globe Staff / March 29, 2009
Text size – +

The Dorchester Historical Society has seen it happen time and time again: An old Victorian is purchased by a developer; it gets torn down and replaced by condominiums.

It's a scene that plays out all too often in Boston's biggest neighborhood, according to preservationists who say a glut of older Dorchester homes have fallen victim to the recent boom of condo construction.

"These old buildings are very well-constructed . . . they've lasted for over 100 years," said Rosanne Foley, who chairs the Dorchester Historical Society's architectural preservation committee. "Why knock them down, when two streets over there's a vacant lot with ten TVs [dumped] on it?"

Every year, the historical society compiles a list of the Top 10 endangered properties in Dorchester, to help raise awareness of architectural assets at risk of being bulldozed. The list is updated and released in May, to coincide with National Preservation Month. The group has been making the list since 2004.

Several of those endangered properties have since met the wrecking ball. They include a 200-year-old home on Grant Place in Lower Mills (it was replaced by condos); the 1893 George Frost mansion at 223 Neponset Ave. (razed in May 2005 and replaced by six condo units); the Joseph Foster House at 1615 Dorchester Ave. (replaced by two contemporary three-deckers); a red Gothic gingerbread cottage built around 1850 on Pearl Street (replaced by two three-story buildings that are still under construction); and a house that was built around 1860 at 615 Adams St. (now a vacant lot, it's the future site of a 16-unit housing development called Blandino Farms).

Although the real estate market has cooled considerably over the past year or so, preservationists fear Dorchester will continue to be a target for tear-down projects. Buildings in certain parts of the city - such as the Back Bay, Beacon Hill, and the South End - are afforded more protection because they are in designated landmark districts. There are no such landmark districts in Dorchester.

"Downtown and a few other neighborhoods in Boston get attention for the historical significance of their properties, and Dorchester, which has equally amazing resources, is pushed off to the side and forgotten," said Foley.

Dorchester is older than Boston itself (it was established in June 1630, and annexed by Boston in 1870), and the oldest house in the city of Boston is in Dorchester. Built in 1648, the James Blake House was rescued from demolition in 1896, when the Dorchester Historical Society helped relocate it 400 yards from its original location to Columbia Road, where it still stands today.

The action to save the James Blake House was one of the first architectural preservation efforts in America, and would not be the historical society's last.

One property the society is watching closely is 1203 Adams St. - a Federal-style house that was built around 1795 by a Revolutionary War veteran named John Bussey. The house, once used by the Walter Baker Chocolate Co., is at risk of being torn down. In 2007 the Boston Landmarks Commission granted a demolition delay of 90 days. But that delay has long expired. The building is up for sale, and whoever buys it will have the right to tear it down.

"It's certainly in danger. It could come down, and there's nothing we can do about it," said historical society president Earl Taylor. "Organizations like ours, we have bully pulpit status. We can make noise, but we have no legal grounds" to stop demolition.

Taylor would like to see new legislation that eases the criteria for buildings to gain landmark status, and allows the Boston Landmarks Commission to issue demolition delays for more than 90 days.

"We often end up with projects that don't necessarily make city living better, just more dense," said Taylor. "There needs to be some protection for buildings."

He added: "There is value to seeing a landscape of architecture from different times, not just modern boxes or imitations of the old, like a Disneyland version of an old house."

To view the list of endangered properties from previous years, go to www.dorchesteratheneum.org and click on "architectural preservation."