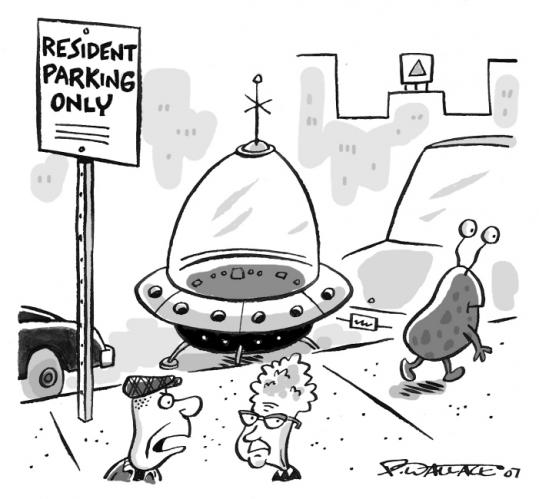 The letter is more than 10 years old, but in the history of parking ticket excuses, it might be unrivaled.

"Dear Boston," reads the appeal, from 1997. "On the morning in question I went through what is known in the parlance of the field as an 'abduction episode' in which myself and my stepmother's car were taken, against our wills, aboard an alien space craft. When we were returned to the Earth, we were set down in that particular parking space. Aliens are apparently ignorant of your very just system of fines in regard to parking violations.

"As you might imagine," it goes on, "I am unable to offer any proof of my experience other than the bizarre fact of having parked illegally, a practice I find particularly distasteful. I would be very grateful for your swift cooperation in clearing up this matter as it is, no offense intended, of rather minor importance to me given the events of the past few days."

Gina Fiandaca, Boston's assistant parking clerk, has heard thousands of reasons for getting out of a parking ticket. Her department dismisses a surprising amount of violations, but some excuses - be they outrageous, pathetic, or just bizarre - are just too much to believe.

There was the guy who double parked while proposing to his girlfriend. The letter from a woman who'd contracted "massive/explosive diarrhea" from eating oysters and had no choice but to park in a handicapped spot on Newbury Street and find a bathroom.

One of Fiandaca's favorite missives is from a man who attached a three-paragraph letter from president George Bush, thanking the man for supporting the Gulf War in 1991. "And I get a ticket!" the man scribbled on the letter.

But a wild excuse doesn't necessarily mean a rejected appeal.

"There is a woman who was from out of state who got a ticket when she was visiting. She wrote a letter saying that she was here visiting Boston because Boston was on her 'bucket list' and she was actually waiting on a list for a heart transplant," Fiandaca said. "We did end up dismissing her ticket. She sent us back a letter saying she was very grateful, and that if she did end up getting her heart, she would come back to Boston and park legally."