THIS STORY HAS BEEN FORMATTED FOR EASY PRINTING
WHO TAUGHT YOU TO DRIVE?

Totally centered on his driving 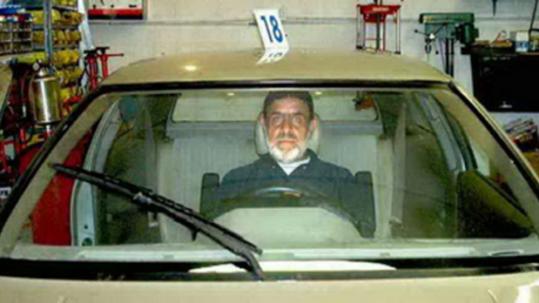 Mechanic and artist Mahmood Rezaei-Kamalabad at the controls of his car with the steering wheel in the middle of the dashboard. But is it street-legal?
By Peter DeMarco March 22, 2009
Text size – +

Harmony. Balance. Centeredness. Never have such transcendent words been linked to Boston driving. If anything, their antonyms - carelessness, discord, chaos - would more aptly apply.

But if Mahmood Rezaei-Kamalabad had his wish, we would all be driving with a higher sense of awareness. We would all be so calm and focused behind the wheel that we would actually care about our fellow drivers. And we wouldn't need to move to Sweden to be this way - this miracle could happen right here in Massachusetts.

All we need to do, says Rezaei-Kamalabad, a North Cambridge mechanic, artist, and devout Muslim, is to move our cars' steering wheels to the center of the dashboard. That's right: Put the wheel, driver's seat, brakes, and gas pedal smack dab in the middle of the car, just like he did to his 1989 Dodge Colt.

"If you look at the animal, the first things God created for us, we sit on the back of the animal. He did not create some animal you sit on the left or right side of the animal. The weight has to be even," says Rezaei-Kamalabad, his English slightly off. "If the weight is on one side more than another, in a couple of months the animal is going to be crooked in shape. Basically, we are crooked in our mentality, but the people are not aware of it."

Our driving crookedness stems from sitting on the left side of the vehicle, where our viewpoint of the road - and life - is skewed, Rezaei-Kamalabad says. This bothered him so much that he spent a year and a half turning a junked Colt he bought for $200 into a prototype of the perfect car, which he has dubbed the "Celestial Car."

The driver sits alone in a single, centered front seat. Instead of a middle rear-view mirror, the car has small mirrors in both windshield corners. There's a prayer rug instead of floor mats, a central windshield wiper, and Rezaei-Kamalabad has even split up the radio controls - the tuning knob is on one side of the wheel, the volume on the other - because it's important to use both hands.

He's also rigged the driver's seat to slide to the left or right side of the car, depending on which door you open to get in or out. "If you park on the street, you can get out the sidewalk side. Much safer," he says.

As for achieving harmony and balance, the car is ideal because it splits the difference between our natural "materialistic" side, that being the left side of the body, and our "spiritual side," the right side of the body, he says.

"The person goes to the synagogue, church, and mosque and prays, and he starts to [have a] healing sense in the middle. And he comes and sits in the car, and in five seconds all is gone," Rezaei-Kamalabad says. If someone cuts you off in the parking lot, it might not take even that long.

The law says
But is our thoughtful mechanic's car street-legal? Can you drive a car with a steering wheel in the middle?

"Yes. No problem," Rezaei-Kamalabad says. "Some post office delivery cars, the driver is on the right side. And you drive your car on the left side. So if you can drive on the left or right, the middle is that much more correct. Right is correct, left is correct, middle is double correct."

I loved his reasoning, but I figured there might be more to it.

Rezaei-Kamalabad admits that while his car runs fine - or used to, before an oil problem forced it onto a car lift, where it now sits gathering dust - he has never driven the Celestial on a public street. When he went to purchase car insurance he was told the premium would be $3,000 because the vehicle was so "unusual." That was too steep for him, so he decided to keep the car strictly as a piece of spiritual artwork alongside dozens of other sculptures adorning his auto repair shop, Aladdin Auto Service.

Since Rezaei-Kamalabad never got the car inspected, he doesn't really know whether it would pass.

For that answer, I first called up the National Highway Traffic Safety Administration, which sets safety standards for car manufacturers.

"We don't regulate consumers who build their own vehicles for personal use, so federal motor vehicle safety standards would not apply to that vehicle," spokeswoman Karen Aldana told me. "The whole issue falls completely with the state."

I pored through both the Massachusetts General Laws and the Code of Massachusetts Regulations, finding not a single mention of where your steering wheel has to be. The Registry of Motor Vehicles provided some answers, but nothing definitive.

Rezaei-Kamalabad's creation, said Registry spokeswoman Ann Dufresne, would most likely be considered an "altered vehicle." As such, the Celestial Car would need to be inspected directly by the Registry, not a neighborhood inspection station. The car would have to pass all the standard tests - proper brakes, lights, etc. - but beyond that, it would also have to meet "visual" approval by the Registry, Dufresne said.

"We would have to make some determination as to the distance between the gas pedal, the brakes, and the steering column," and whether a driver could easily reach all of them, she said. "We don't want to put anything on the road that would be unsafe to this driver or any other driver or anyone else on the road, including pedestrians. It's one of those judgment calls the actual inspector would have to make."

Whether Rezaei-Kamalabad will ever put his rejiggered car to the test remains to be seen. , which he pitched the car to, didn't like his idea. But Rezaei-Kamalabad points out that some very high-end sports cars, such as the McLaren F1, have steering wheels in the middle. The time will come, he says, when passenger vehicles will as well.

After all, it's only natural.

"You are not in a squeezed position. You are open, in comfort," he says about his design. "That makes a big difference in life."

What drives you crazy about local drivers? Is there a traffic rule you've always wondered about, or a pet peeve that never fails to annoy you? Send us a message about it: ciweek@globe.com. We'll check it out.