THIS STORY HAS BEEN FORMATTED FOR EASY PRINTING
ALLSTON, BRIGHTON 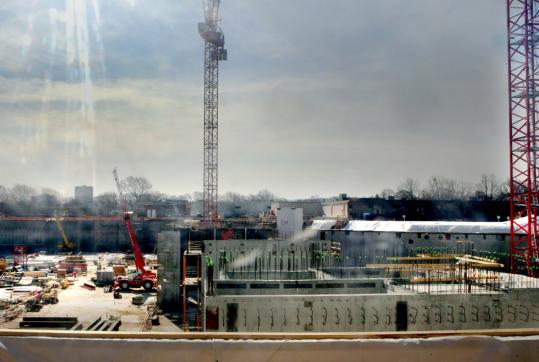 The future home of a Harvard Science Complex in Allston. Neighbors of the parcels Harvard owns in the area and members of the Boston chapter of the Planners Network toured the area recently to consider the area's future. (Globe Staff Photo / Wendy Maeda)
By Andreae Downs Globe Correspondent / March 22, 2009
Text size – +

Now that visions of boulevards with shade trees, outdoor cafes, and lots of foot traffic have vanished with the 12,000-plus point Dow Industrial, residents of North Allston and Brighton are looking around and asking "Where do we go from here?"

On Saturday morning last weekend, a dozen neighbors, several members of the Boston chapter of the Planners Network, and three Harvard undergraduates affiliated with the Harvard student group Sustainable Allston walked along Western Avenue and through Brighton Mills to view Harvard University's holdings, and to talk about the near future.

"What could happen with the buildings we have here now?" asked Harry Mattison, a neighborhood activist who organized the tour.

They saw an empty gas station, the hole where the $1 billion Science Complex will go (someday), and a motley collection of buildings, few of which looked inviting. Many stood vacant.

Harvard spokeswoman Lauren Marshall said in a later interview that Harvard has leased 85 percent of the property that it can - about 768,000 square feet.

"We are aggressively marketing these properties despite the economy," she said.

But the tenants to whom Harvard has leased so far, neighbors said, have hardly provided the street-level interest that might bring in pedestrians, shoppers, or any people at all. They pointed to the back sides of businesses that front Storrow Drive, to the green warehouse that Harvard uses for mail, compost, storage and a ceramics studio, and to Finale, a bakery that sells its high-end confections in other neighborhoods. But not here.

Paul Conforti, co-owner of Finale, said he'd love to put a retail bakery where Finale's offices and bakery are now, but that there's not enough foot traffic to support such a business right now.

"Pioneers get shot down by arrows," he said. "We want to be a good neighbor, but it has to be a good business decision."

One of the missing pieces, said neighborhood activist Tim McHale, may be planning.

"Once it's planned, we can start infilling - parks instead of parking, using the buildings we have, but not using them willy-nilly," he said. "Something needs to happen to kick-start something here."

Which started the planners talking.

Zakcq Lockrem, of the Planners Network, said his group had already thought that empty car dealerships, with their yards of glass frontage along Western Avenue, would be ideal for temporary public art displays.

"That would bring people here, looking at what's going on," he said.

The Boston Redevelopment Authority's Kristen Keefe, who specializes in retail, said in a later interview that her agency was running a similar pilot in Downtown Crossing.

"It's been pretty successful," she said. The auto dealership in question "could provide space for some pretty big works."

Anne Lusk, a researcher at the Harvard School of Public Health, along for the tour, aired the idea of "cycle tracks" that would substantially separate bicyclists from traffic along Western Avenue and North Harvard and Everett streets - all vital connections for the university and the neighborhood.

"People would want to come to Allston for the bike facilities," she said. And with Harvard and Boston both looking at installing bike kiosks, much like the Parisian short-term bike-rental program, the need for safe bike routes is even more critical, she said.

"It would put Allston in the forefront of Boston becoming bike-friendly," said Lockrem.

Harvard's Marshall said the university was looking forward to discussing these ideas at BRA meetings.

"We would like to see" the neighborhood "transformed, but it will take time," she said. "We will do our part to encourage it."

Keefe, of the BRA, said she will also be marketing the neighborhood.

"The mayor is very supportive of this work," she said.

Ending up on Lincoln Street, Mattison pointed out a 450,000-square-foot building that had sat empty since its construction in 2001. Could this house the overcrowded Gardner School, he wondered?

"It seems to be a perfectly good building," said Lockrem. "That it's not finished inside shouldn't be a problem."

But it is a problem, said Harvard's Marshall.

"It would require a lot of investment," she said. "It's currently not in condition to lease."