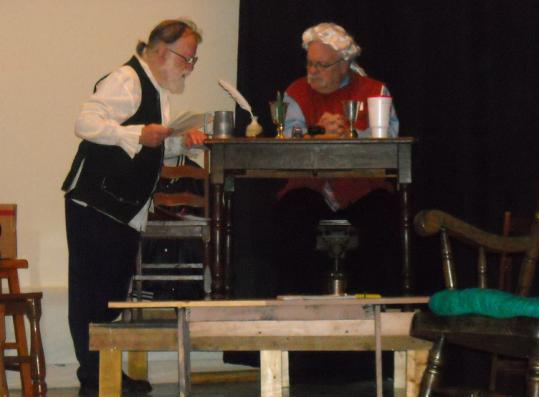 HISTORY COMES ALIVE - The Randolph Theater Company will present "1776," a musical about the signing of the Declaration of Independence, at the newly renovated Stetson Hall. Performing in the Greek Revival-style building, which was built in 1842 and is a town landmark, has added extra depth to the show, said director Constance Miller Clinton. Being in an historic building has made the actors more aware of the significance of the show, she said. Christyn Hobbs, who plays Martha Washington, said: "I feel that performing for people in itself is a great honor as we are escorting the audience into a world of history. To have an actual piece of history to use as a backdrop while entertaining is moving." Hobbs is one of about 40 cast and crew from around the South Shore working on the show. The musical was first produced on Broadway in 1969, and has won five Tony Awards, including Best Musical. Performances are Friday and Saturday, 7:30 p.m., at Stetson Hall, 6 South Main St., next Sunday at 2 p.m., and March 27 and 28 at 7:30 p.m. Tickets are $10, $8 for children and seniors, and may be purchased at the recreation office, or call 781-961-0939. - Wendy Chow

ROCKLAND
ROOF TAKES PRIORITY - The Rockland Historical Commission is taking steps to save two key historic buildings, starting with the Grand Army of the Republic Hall. "First is repairing of the roof, which is in dire need of repair," said Jim Paul, commission chairman, "so before it really wrecks the building we're going to fix that and take care of the infrastructure." Roof work nearly 20 years ago was never completed, and "it's leaking bad," Paul said, so the commission has secured a $10,000 foundation grant to undertake $15,000 in repairs to the worst half of the roof. Various fund-raisers will take care of the shortfall, he said, as well as raise historic awareness. The project is out to bid and should begin soon. "We feel that it is one of the most important buildings in town," Paul said. "And the Historical Commission needs a headquarters and a place to bring the public and show off our collection of artifacts." Later, from its unofficial headquarters in the GAR Hall, the commission will launch efforts to repair the now-closed 1745 House. "We're hoping to use the GAR as a fund-raising center," Paul said. - Steve Hatch
SCITUATE
TOWN ADMINISTRATOR SEARCH - The town has received 41 applications so far for town administrator. Richard Agnew, who has held the post since 1990, is retiring at the end of June. Selectmen have not set a deadline for applications, but are expected to begin the selection process at the end of this month. Board chairman Shawn Harris said selectmen are individually reviewing the applications that have been received to date. The board will decide on a number of candidates to call in for closed-door interviews, and then will select finalists to be interviewed in open session. The board hopes to have a successor in place by the time Agnew departs. - John Laidler
WEYMOUTH
EATING SAFELY - The town health department is teaching people how to avoid the gastrointestinal norovirus - over lunch. "We never thought about it not going together well, talking about a virus that causes nausea, vomiting, and diarrhea while we're serving lunch; we thought it was a good way to entice people to come," said public health nurse Diane Lamb. "Right now there's an outbreak in Massachusetts and we wanted to alert people and encourage them to wash their hands, and fruits and vegetables." The free luncheon lesson will be held March 23 at noon at the Whipple Center, 182 Green St. Reservations can be made by calling 781-340-5008. - Johanna Seltz